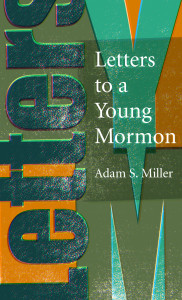 I published a new book called Letters to a Young Mormon (Maxwell, 2014). It’s very small and very personal. You should read it.

I wrote the book as a series of letters intended for my own children. My oldest is thirteen now and my boys are nine and seven. (The hour already seems late.)

I wanted to give them something to help them understand why I’m still trying – with all my weakness and wondering – to give my life both to God and to Mormonism.

Though the book is written for my children, it treats them as adults. (This is, I think, something we do too rarely, even with adults.) It talks in a grownup way about grownup things. I tried to cover both the things they’ll need to know now and the things they may need to know later. I wanted to give them both things to be used and things to be remembered.

The book doesn’t try to soft-pedal the troubles that will come to them with being hungry and lonely and mortal and it doesn’t try to sand down the rough edges of Mormon culture and history. Rather, the book tries to show these troubles in a different light. It tries to model a perspective that doesn’t deny or expunge their difficulty but cares for them as life’s inevitable companions.

This shift in perspective is introduced a line at a time in each of the book’s letters. Given this, I don’t recommend reading the book piecemeal or only in parts. It’s not that kind of thing.

I try to speak directly and with my own voice. Unlike some of my professional work as a philosopher, this book isn’t academic or technical or vague. It is filled with very practical advice about love, hunger, faith, prayer, scripture, sex, the temple, etc. and I return constantly to very concrete and personal examples drawn from my own life.

Most of all, the book is faithful. Though some might suggest otherwise, it bleeds testimony.

I know because the blood is mine.

You’ll have to make your own decisions about this book. It may be of more value to some than to others.

Here’s a link to the Maxwell Institute press release.

Here are links to the currently available reviews:

EOR, “Letters to a Young Mormon: A Review”

Chris Henrichsen, “A Letter to My Young Mormon”

10 comments for “Letters to a Young Mormon”