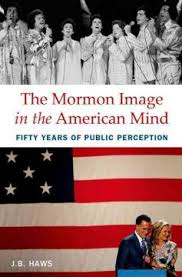 Over the holidays I read The Mormon Image in the American Mind: Fifty Years of Public Perception (OUP, 2013), by J. B. Haws, a BYU history prof. Technically, the book is a study of how the LDS Church and Mormonism in general is perceived by the American public, and the author presents survey data throughout the book to gauge the ups and downs of the various ways that Mormons and the Church are viewed. No doubt the book is required reading for every LDS Public Affairs employee. But for most readers the book also serves quite nicely as a narrative history of the last fifty years of Mormonism. A lot has happened and a lot has changed: reading about George Romney’s 1968 quest for the Republican nomination for President is like reading about another world.

It’s worth contrasting LDS history since “normalization” in the early 20th century with what came before. The LDS story in the 19th century is full of movement (from New York to Ohio to Missouri to Illinois, then across the Great Plains and across the Rocky Mountains to Utah) and action (conflict with local neighbors, conflict with state and local government, even conflict with the United States Army). But the era of movement and action was over by 1910. After that, LDS history is all about institutional development, doctrinal evolution, and social change. A history of Mormonism in the last 50 or 100 years requires a different approach than the first 50 or 100 years. Without injecting a good deal of sociology into the mix, an account of LDS history of the last 50 or 100 years is likely to miss most of the story. So a book that focuses on public perception of Mormonism is not treating a marginal issue, it is actually an effective way to tell the main story of Mormonism over the last 50 years: What has happened? What has changed? What worked well for the Church and its membership? What did not work out so well? The fact that most readers lived through some or even all of the events covered likely makes reading the book more relevant, even more personal, for most readers. I will touch on two episodes in the book to encourage readers to go buy a copy of the book and get the full story.

Civil Rights. This was a really big deal in the Sixties, and the Church became, at times, a target. An easy target. In late 1969, Stanford cut all intercollegiate sports activities with BYU. A BYU sportscaster dodged a Molotov cocktail at a Colorado State game in 1970. Fourteen black football players on the University of Wyoming team were dropped from the team when they pressured their coach for permission to wear black armbands during the BYU game in 1969. Days later, an LDS public relations official and a young Darius Gray, one of Mormonism’s unsung heroes, went to Wyoming to meet with the student protestors, making a surprisingly positive impression on a large and unhappy crowd. In 1972, when the Disciples of Christ cancelled an upcoming national meeting in Salt Lake City to protest the LDS priesthood ban, it was Darius Gray who went to Indianapolis to meet with Disciples officals for two days to correct misinformation and again make a positive impression with those he visited. The bookends of this rather difficult era for the Church are probably 1963, when the NAACP threatened to stage protests at General Conference (this was headed off by a statement read at General Conference by Hugh B. Brown, a member of the First Presidency, that endorsed “full civil equality for all of God’s children”), and 1978, when President Spencer W. Kimball’s unexpected revelation ending the priesthood ban was announced to the Church and affirmed by the membership. Ironically, by 1978 the issue had largely faded from public view and there was little public pressure on the Church for a change.

Evangelicals. There has always been some institutional friction between Mormonism and Evangelicals, but it really flared up in the 1980s. Haws notes the building of LDS temples in Atlanta (1983) and Dallas (1984) as one reason why Evangelicals suddenly gave more attention to combatting the Mormon menace. Walter Martin published The Maze of Mormonism in 1978. Haws devotes several pages to the film The God Makers, which came out in 1982. The most interesting quotes in this section were from Greg Johnson, a Salt Lake City pastor who, as a teenager in the 1980s, would attend Sunday night screenings of The God Makers at Evangelical churches to share his conversion story (out of Mormonism) with the audience. Later in the book, Haws recounts how Johnson moved from anti-Mormon activism (my term) to supporting academic Mormon-Evangelical dialogue. It was Johnson who initiated discussion with BYU Religion prof Stephen Robinson that led to the book How Wide the Divide? A Mormon and an Evangelical in Conversation (1997) that Robinson co-authored with Evangelist scholar Craig Blomberg. Johnson later began his own round of public Mormon-Evangelical conversations with BYU Religion prof Robert Millet. [I posted notes to a 2012 presentation by Johnson and Millet.]

It is interesting to contrast the race issue, which received little discussion during Mitt Romney’s 2012 presidential bid, with the Evangelical issue, which was a big deal during the campaign, at least the primaries. Haws covers that campaign, as well as Prop 8 and The Book of Mormon musical, in the final chapter. One theme he pursued throughout the book was the contrast between perceptions of Mormonism as an institution (rich, secretive, threatening, repressive) and of Mormons as individuals (friendly and family-centered, nice neighbors, don’t smoke or drink). That perception didn’t change much over the fifty years Haws covered in the book. That split image of Mormonism in the American mind seems like the biggest challenge the Church faces in the next fifty years.