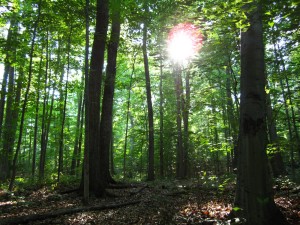 We talk about Zion in a lot of different senses, but I think most of these share the general idea of communally gathering, developing, sharing, and partaking in everything that is lovely, virtuous, or praiseworthy or of good report. How do we do this, both collectively and individually, on both a theological and political level?

Once again (obviously) I can’t adequately answer that question here. But once again I’m bothered by a lot of the discussions I see flying around our virtual and ward-level worlds. I don’t like the divisive,  polemical way in which these discussions are framed – especially when the discussion revolves around whether all is well in Zion or whether Zion is in need of some serious, often non-contiguous reform. In what follows, this question is my main target and what I want you to consider. Is the good ship Zion sinking while the crew and passengers obliviously bask in what they take to be the sunlight? Or ought we to simply ignore the wind and the waves, utterly unconcerned and with naive faith that the Master is well aware of and in fact has set limits on the tempest that rages?

My discomfort is not because I’m opposed to strong positions, but because the framework in which these discussions are taking place make the valid insights of the “opposing” positions show up as mutually exclusive. I want to affirm both poles, and more importantly, I think that the project of Mormonism naturally affirms both – i.e., Zion’s a great, non-perfect place, especially when we refuse to rest content with the status quo. What is needed is a dialogic context that allows for such an affirmation.

I’ve written before about Mormonism incorporating the core principles of both poles in historical polemics.[1] I also think Mormonism attempts to grasp both ends of two other (related) poles, both of which are critical to our attempts to build Zion: Individualism vs. Communalism and Liberalism vs. Convservatism.

Mormon scripture, doctrine, and historical experience are rife with both individualistic calls to work out our own salvation with fear and trembling, as well as various declarations that neither temporal nor eternal salvation can be achieved on an individual basis. I find the most plausible and satisfying way to understand these is not to see them as contradictory, or explain them away by indexing them to the differing historical circumstances in which the commands were issued. Rather, we ought to acknowledge that we’re commanded to embrace both the undeniable good of individual freedom and the undeniable good of community.

It’s not merely that we lose out on an important good and thus impoverish ourselves when we deny one or the other. There are also real dangers associated with doing so, dangers that have made themselves prominently manifest in recent history. Forsaking community in an overzealous glut of individualism threatens a theoretically and existentially unsatisfying relativism and nihilistic despair. In today’s world it’s not just the cigarette smoking, black beret wearing French philosophes and American poets who find themselves profoundly disoriented while trying to respond to our modern experience of meaninglessness. Being reduced to a cog in an economic juggernaut, being super-saturated with a nonstop entertainment regime, being assaulted with endless arrays of choices in every facet of life, being surrounded by hosts of humans with whom one has no substantive connection, observing the spotlight on scientism and its promise of an exhaustively articulated and valueless universe – the most common and most eccentric of us struggle with these and other aspects of modern life that, in the absence of strong community and cultural values leaves us becalmed in an infinite, placid sea.

On the other hand, forsaking our individual ability to choose a life that feels both authentic and worthwhile is not something any of us would easily part with today. None of us want others to determine who we marry, what we study, how we vote, or even how we decorate our facebook page – in general we don’t want our choices constrained. Denying individual agency and rights threatens the unjust dominations that have been so prominently highlighted and battled against in the 20th century – the host of oppressive “-isms” that have sought (and continue to seek) to build idiosyncratically beautiful edifices by forcing individual lives into prefabricated molds in order to serve as brick and mortar.

From where I sit, these goods and the real and imagined spectres that haunt their absence are the animating forces behind liberalism and conservatism. Partisan positions that urge one while decrying the other are misguided and miss the dialectic that the Restoration presents us.

I think this divinely inspired dialectic is best seen from Eden – the garden toward which we ritualistically return each time we pass through the temple. Mortality – and perhaps the cosmos more broadly – is structured finitely. Our context demands we act without certainty and without guarantees – in part because our context ineliminably contains other agents. Sometimes there doesn’t seem any way of pursuing or obtaining that toward which we know we ought to strive. We believe in the efficacy of God’s commands, we yearn for the promised blessings, and yet we don’t know how to fulfill or obtain either from within our present circumstances.

In such cases the right thing for us to do is sometimes to simply (and adamantly) hold fast to the light and truth we’ve already been given, just as Adam did – to remain unyielding through the vicissitudes of change and challenge. I think our clinging to and proliferating temples is itself a great example. Temples were given to us in a historical context that was and is antithetical to esoteric ritual. Note that our sister Restoration churches abandoned the temple either immediately or with the second great wave of anti-Masonism that swept the country in the mid 19th century. The climate’s hardly more hospitable today; some in Europe even questions whether maintaining this sort of exclusive sacred space adequately respects a separation of Church and state! And it’s always been the case that a significant portion of our members are themselves perplexed and even unnerved by temple ritual. Our drawing nigh unto other religions in the spirit of both ecumenicalism and public relations has only exacerbated the uncomfortable gulf that the temple carves between us and other western religions. Nevertheless, as a people we hold tightly to these practices, while waiting for further light and knowledge. I think we’re richly blessed because of this.

Sometimes, however, the right response is precisely the one that Eve models. Recognizing the unsustainability (i.e., the lack of progression) in the status quo, she nobly strode forward into the unknown, and in doing so made our current, salvifically necessary context possible. Sometimes, when the heavens are less forthcoming than we would like, we need to act on our best judgment. President Packer has articulated this point on a number of occasions, recounting one of life’s great lessons that sometimes we simply can’t see how to do as we’ve been counseled. In those times, he tells us, we need to step into the darkness.[2]

Whether to hold fast or creatively move forward, whether to play Adam or Eve, is always a difficult dance. But we apostatize from the light we’ve been given when we refuse to see the reason and necessity of both positions. This is true in our individual lives as well as our collective life in the Church.[3] As the temple shows, I think this happens most effectively when those disposed toward one path or another come together to negotiate after the pattern of an eternal marriage. When we do, we make Zion possible – even when the complete fulfillment of Zion requires that we first walk through the wilderness.

Mormonism carves out a distinct position with regard to the epic theological battles waged in the Judeo-Christian tradition: Polytheism vs. Monotheism, Priestly vs. Rabbinic Judaism, Esotericism vs. Exotericism, and Orthodox vs. Reformation Christianity. It’s easy to look at these battles and conclude that Mormonism takes a middle-ground approach. But far from being a spew-worthy, lukewarm reaction, Mormonism works out a distinctive way of framing the theological battles themselves so that, far from being pitted against one another, the polar ends of the warring dichotomies actually become the cherished aspects of a unified tradition. . . . That is . . . we interpret the stakes in such a way that we maintain an equal and complimentary allegiance to both God and Gods, both scripture and priestly practice, both prophets and institution, both hierarchy/mediacy and democracy/immediacy.

[2] The full quote from one of those articulations:

Shortly after I was called as a General Authority, I went to Elder Harold B. Lee for counsel. He listened very carefully to my problem and suggested that I see President David O. McKay. President McKay counseled me as to the direction I should go. I was very willing to be obedient but saw no way possible for me to do as he counseled me to do.

I returned to Elder Lee and told him that I saw no way to move in the direction I was counseled to go. He said, “The trouble with you is you want to see the end from the beginning.” I replied that I would like to see at least a step or two ahead. Then came the lesson of a lifetime: “You must learn to walk to the edge of the light, and then a few steps into the darkness; then the light will appear and show the way before you.” Then he quoted these 18 words from the Book of Mormon:

“Dispute not because ye see not, for ye receive no witness until after the trial of your faith.”

Those 18 words from Moroni have been like a beacon light to me.

[3] For example, my hope and prayer is that the women and the general leadership of our Church will both play both roles – Adam and Eve – coming together to figure out what needs to be done in our current, finite context with respect to female ordination. I’m personally convinced that the status quo is utterly untenable. I hope that we as a people – members and leaders – can faithfully supplicate the heavens and receive revelatory change in Zion. If that doesn’t happen, I hope we’re wise in how we respond to our ignorance.

← Vote for Mormon of the Year 2013
Varieties of Divine Eclecticism →

9 comments for “Reasoning Together – Zion”