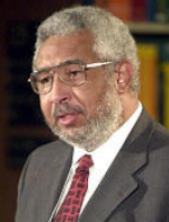 After due consideration the staff of Times and Seasons has selected Darius Gray as the 2013 Mormon of the Year, our annual designation of the Mormon who had the greatest impact or influence on Mormons and Mormonism during the year.

This past year represented a culmination in Gray’s lifelong work on race issues in the LDS Church, with the publication in December of the LDS Church’s Gospel Topics page on Race and the Priesthood, which for the first time repudiated much of the logic used by Church members to justify the priesthood ban. While events of the year may not have attracted attention personally to Gray, his quiet and consistent effort over decades has clearly led to a changed attitude among both leaders and members of the Church.

Despite continuing and significant health issues, Gray has maintained a frequent travel and speaking schedule, in which he has spoken to both Mormon and non-Mormon groups across the United States. In addition, he has written regularly about race and what it means in a Mormon context. In  particular, the 3-volume series Standing on the Promises, authored with Margaret Blair Young, has clarified Mormon history about race and brought more accurate perceptions to a generation of Church members.

While many Mormons attracted attention in the media this past year, Gray’s influence has accumulated to lead to real change, clearly seen in the current views in the Church about the priesthood ban.

Times and Seasons is not the only media to recognize Gray’s efforts over the years. Particularly touching is author Margaret Blair Young’s recent tribute to him. Interviews with Darius Gray appear on the pages of the Genesis Group, Mormon Artist and Mormon Stories. And Gray’s own thoughts have not only influenced a Mormon audience, but has gone out to a national audience in publications like the Huffington Post.

The Mormon of the Year designation is a recognition of the effect that the person or group of persons recognized has had during the past year. It is not a prize or award, so nothing of value is being given to anyone as a result of this designation, and it is not necessarily meant to honor the person or persons recognized, so no effort will be made to contact or notify Gray.

We were very pleased by the interest in selecting the Mormon of the Year. The Times and Seasons readers and staff nominated a total of 31 candidates. We learned a lot from those nominations, especially the range of our readers’ beliefs and feelings and about Mormons who have done significant things and really deserve to be on a list of possible Mormons of the Year.

The LDS Church’s First Presidency and Quorum of the Twelve Apostles were excluded from nominations.

We also appreciate those who dropped by and participated in our online vote, which taught us a lot about the passion that many people have for their friends and those that they admire. More than 2,200 people voted in our poll, more than any year except our first year. We hope that those who dropped by enjoyed Times and Seasons and will drop by again.

← Women and the Priesthood: What’s the Conservative Position?
Letters to a Young Mormon →