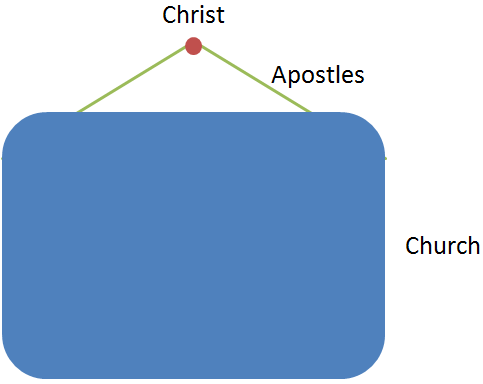 The Church, prior to the Apostasy. (I used pencil and paper instead of PowerPoint on the mission, but you get the idea.)

If you want to see clearly, you cannot tape together the shattered shards of a mirror. So too, we taught, Christ had to abandon the broken remnants of His former Church and—with Joseph Smith—start all over again. Christ’s Church could not be “reformed” back into existence, it had to be restored. 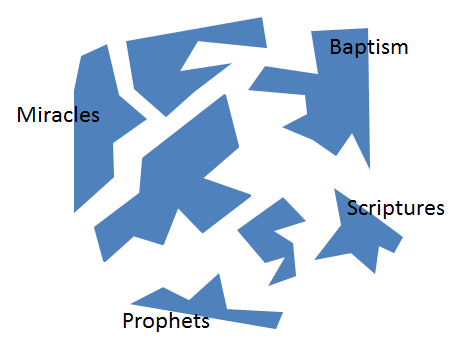 I don’t actually remember what we would write, but I remember the emphasis was on knowledge / doctrine.

That’s fine as it pertains to the concept of priesthood authority, but unfortunately we specifically taught that the shards of the broken church corresponded to theological truths. Our message was clear: if you want all the truth, you have to come to the Church of Jesus Christ of Latter-day Saints. We’ve got it all.

Except, of course, that we don’t.

The Apostasy did not constitute a sudden revocation of divine truth from the Earth, and God was not on some kind of extended vacation during the intervening centuries. Writing of the time, President John Taylor said:

These truths, while scattered, were not gone from the Earth. Joseph Smith came to understood this, when—apparently inspired by the twelfth chapter of the Revelation of St. John—he changed the wording in D&C 5:14 to describe the “coming forth . . . out of the wilderness.” He also stated that “the old Catholic Church is worth more than all,” clearly indicating that when it comes to the Restoration, many of the most precious truths need to be uncovered in a work of subtraction as opposed to added as surplus. [1]

The Doctrine and Covenants are full of additional scriptures that establish this view of the Restoration as a process of gathering truths found here on Earth as opposed to bringing down heretofore unknown principles directly from Heaven. In 49:8 the Lord speaks to Joseph of “holy men that ye know not of,” and in D&C 88:118 we’re told to “seek ye out of the best books words of wisdom; seek learning, even by study and also by faith.” Most interestingly, the Lord states in D&C 10:53-54:

And for this cause have I said: If this generation harden not their hearts, I will establish my church among them. Now I do not say this to destroy my church, but I say this to build up my church; Therefore, whosoever belongeth to my church need not fear, for such shall inherit the kingdom of heaven.

This revelation is dated to 1829, so the people who “belongeth to my church” were not members of the formal Church of Jesus Christ of Latter-day Saints. [2]

When I was much younger, I thought there was nothing to the truth beyond the Church that I saw. When I grew older I learned that there was truth—vast and bright and terrible and precious—outside what I already knew within my own tradition. Blinded by the brilliance, I could no longer see how the Church could matter. Now I’ve learned that while the role of the Church is not all-encompassing, it is real and essential.

The principle at work here is something Terryl Givens calls “divine eclecticism”. [3] From a theological standpoint, the Restoration was more about divine eclecticism then de novo revelation. Brother Joseph didn’t start with a blank slate and reveal truth. His theological genius was expressed in ignoring sacred cows while at the same time picking and choosing from the inspired principles and teachings that were already here. His mission was one of gathering. The only thing restored from Heaven in the Restoration was the priesthood. [4] Pretty much everything else was already here. Even the gold plates were buried in the dirt. To pick just one extreme example: Joseph co-opted Masonic symbols for use in the temple. Folks act like this is some scandal. It’s not. It’s all part of the same template.

Divine eclecticism is a broad principle. Beyond Brother Joseph’s work during the restoration, it also incorporates the individual responsibility we all have to seek out truth in our own lives. This solemn obligation is captured in some of my favorite quotes from Joseph Smith and Brigham Young:

“We should gather all the good and true principles in the world and treasure them up, or we shall not come out true Mormons.” – Joseph Smith

“I want to say to my friends that we believe in all good.  If you can find a truth in heaven, earth, or hell, it belongs to our doctrine.  we believe it; it is ours; we claim it.” – Brigham Young

And of course there is the 13th Article of Faith, the ultimate manifesto of individual divine eclecticism. We have been sent to mortality to learn and grow and, now that we’re here and in the one true Church, we’re tasked with the job of venturing out again (in the world but not of the world) to continue our mission. The fundamental heroic journey always requires leaving the safety of home. And on our journey the mission is to learn rather than to teach. We may have forgotten the mission in current Mormon culture, but it’s still outstanding.

This may seem to contradict the emphatic commands to preach found within the Doctrine and Covenants, but I don’t think that it does. What do we preach? Repentance. That’s it. (e.g. D&C 19:21) That’s the whole message. Mormons are a voice of warning, not a voice of lecturing. This too is a form of divine eclecticism: our job with missionary work is also one of gathering. I spent a lot of time and energy on my mission trying to convert everyone that I talked to. I wonder how the experience would have been different if I’d seen my job first and primarily as one of finding and only secondarily as one of persuading. 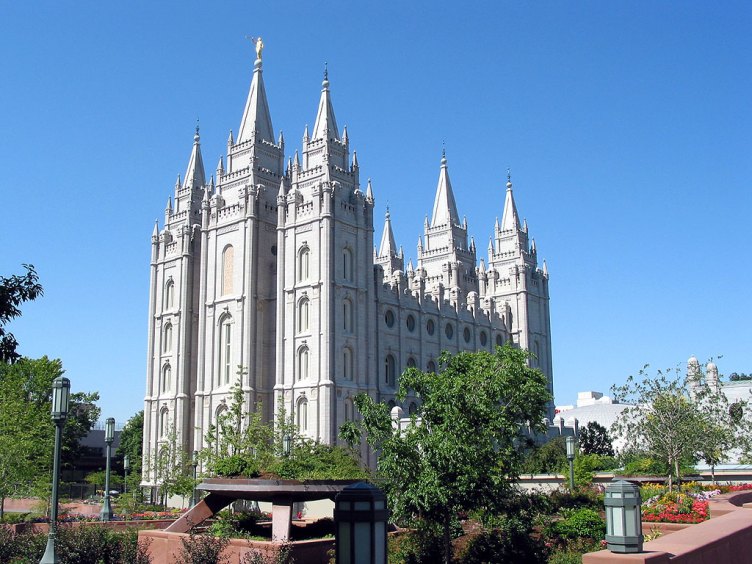 Temples, and everything that goes with them, are at the heart of what Mormonism has to offer the world.

There’s one last variety of divine eclecticism I’d like to mention, and that’s the construction of personal narratives. In Terryl and Fiona Givens forthcoming book The Crucible of Doubt, they take a new view on Paul’s fear, expressed to the Romans, that the saints “Be not overcome of evil.” They write:

In a world that is full of a vast amounts of information—far more generated in a single year than a human being could hope to learn in a lifetime—we have the option to pick and choose what we would like to see, experience, remember, and dwell upon. Obviously this sounds horribly treacherous. The faithful are often accused of believing in God because it’s what they would like to be true, and so when they are wise they are skeptical of anything that looks like wishful thinking. But there is a peril on the other hand as well. There is a danger that we go too far in avoiding a sugar-coated view of reality and stare unblinkingly into the Nietzschean abyss.

The reality is that we can’t not decide to take an active—if indirect—role in determining what we experience and, even more than that, what experiences we choose to enshrine in our memories and propagate in our communications. Rather than mistake passivity for neutrality and objectivity, divine eclecticism would encourage us to balance the necessary shocks and dismays of life—personal as well as remote—with enough that is edifying and fortifying that we can continue to fight the good fight. If we are sincerely engaged in service (that is to say: in true religion), we will naturally encounter much that will confuse and challenge us. Our job, then, is to counterbalance the darkness by seeking out the light. After all, Paul concludes: “but overcome evil with good.”

As Mormons, we understand that the work of creation was not ex nhilo. God created by separation. Gathering is the necessary corollary to separation, and thus divine eclecticism in all its various forms is just one way in which we, in our childlike way, emulate our Father and  His Work.

[1] This observation about D&C 5:14 as it relates to Revelation 12 in particular comes from the chapter titled “Mormons and Monopolies: Holy Persons Ye Know Not Of” in the forthcoming book Crucible of Doubt by Fiona and Terryl Givens.

[2] The understanding of “the church” in D&C 10:52-55 as other than the formal institution founded in 1830 comes from the talk “The Woman in the Wilderness: Mormonism, Catholicism, and Inspired Syncretism” given by Terryl Givens at Notre Dame on 5 December 2013. The full text is online at his website.

[3] The term “divine eclecticism” appears in the forthcoming book Wrestling the Angel: The Foundations of Mormon Thought, Vol 1: Cosmos, God, and Humanity by Terryl Givens.

[4] The nature of the Restoration as paring away unnecessary accumulation instead of adding new truth is also discussed in Wrestling the Angel.

[5] “The Too Tender Heart: Rethinking ‘Overcome with Evil'” in Crucible of Doubt by Fiona and Terryl Givens.

← Reasoning Together – Zion
The Heavenly Family: A Proclamation →

37 comments for “Varieties of Divine Eclecticism”