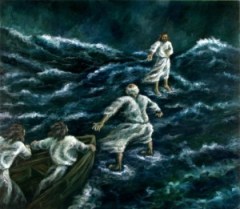 When we talk about faith in Mormonism, we often emphasize the idea that the important part of faith is not just belief in something true, but faith in Jesus Christ. And while we use lots of examples of faith, sometimes those examples leave out the role of Christ in our lives and in our faith. The Teachings of Joseph Fielding Smith manual lesson #5 explores both faith and repentance, including the role of Jesus Christ in each. So the following poem seemed to fit very well.

The author is Annie G. Lauritzen, a granddaughter of Parley P. Pratt who frequently appeared in LDS periodicals at the beginning of the twentieth century. Born in 1867, Annie married Jacob M. Lauritzen, a Danish immigrant, in 1889, and by 1900 the couple was making their home in Richfield, Utah and a decade later they were in St. George. During those years Annie had 10 children while the family moved several times. By 1916 they ended up in Short Creek, where The couple lived out the rest of their lives–Annie until 1942 and Jacob until 1956. Poetry by both Jacob and Annie was collected by their descendants into the volume Hidden Flowers in 1982.

Over the Waves of Sin

We have an immortal brother, a king,
Who once walked over the sea.
A lesson of faith he meant to bring;
To all such as you and me.

I can fancy I see thee, O, Master, dear,
With thine arms outstretched to save
One soul from sinking through lack of faith;
As thou walkest over the wave.

And thus when the waves of life beat high,
On that great tempestuous sea,
Let us know that the god of life is nigh,
Who once walked on Galilee.

In whom a supreme faith bears us up,
And bids us be strong and brave;
It bears us up till we fairly walk
Over life’s great rolling wave.

O, Brother, help us and give us faith,
As we walk over life’s deep sea;
Keep us from sinking as faint Peter sank;
Oh, help us to walk like thee.

And when our great tempests of grief arise,
Sin and sorrow would seek to o’ercome;
With our faith firmly fixed on eternal skies,
O, brother, guide us safely – home.

I live the way Annie uses the imagery of the waves of the Sea of Galilee to refer to the challenges in our lives. And since the story of Peter walking on water is about faith, the poem makes that faith personal. And, as Annie makes clear in the final stanza, we need that faith to be guided home.

1 comment for “Literary Joseph Fielding Smith #05: Over the Waves of Sin”