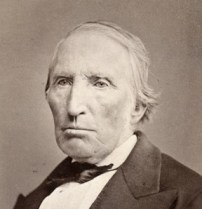 The story of Sodom and Gomorrah, which is found in the material covered in the Old Testament Gospel Doctrine manual, lesson 8, is one of the more bleak stories in the bible. Its depressing to think that a city cannot be saved from its own wickedness, and that there was not one person there who was innocent enough to merit its salvation. Regardless of what their sins were (lets not go into that), the destruction of an entire city is heartbreaking.

I think the following poem captures some of the pathos and the meaning that can be found in the Sodom and Gomorrah story, and many other, similar stories in the bible.

Its author, John Lyon, was probably the second best known Mormon poet (at least among those known for poetry) behind Eliza R. Snow. His poetry is often lighter and more approachable, covering subjects like currency and the death of a canary. Born in 1803, Lyon was largely self-taught, only learning to read at the age of 25. But he nevertheless soon becoming an active literary participant, working for seven different newspapers in his native Scotland and assisting in the production of several anthologies of the work of other poets. He joined the LDS Church in 1844 and published his first LDS poem, “Man,” in the Millennial Star in 1845. By 1849, British Mission President Orson Spencer lauded his work as “genius” and as providing “unmistakable melody and power.” Lyon served an LDS mission in England, published a volume of poems, The Harp of Zion

Son of man, set thy face against Mount Seir, and prophecy against it,
and say, I will lay thy cities waste, and thou Shalt be desolate.—Ezekiel.

Why lands once fertile, are now ruins wild;

And Jacob’s sons without a resting place—

Of all their cities, COMMERCE, GLORY, shorn.

Go to the sacred page—there learn their doom,

Their sins disgrace, their tears could not atone,

Till the refreshing rouse the dormant tomb.

The congurations of the mind’s disease.

Lyon is right, of course. We do learn their doom in the scriptures. And I suppose it is likely that the “refreshing” (i.e., the atonement, I believe) will still rescue some of these doomed souls, despite the sin for which they were overthrown.

← Bo Knows Heaven
Mormon Appropriation of Fundamentalism and Its Outcomes (u) →