The last post I whipped off quickly and in frustration was surprisingly well-received. This post was similarly written, and may require editing. Update: I have good reason to believe that the Ensign article in question did not and definitely does not fully reflect its author’s position. This post is not about the author, nor even the Flood itself. (For that, please go read my Flood post first.) After 16 years, however, the article’s content is still easily and prominently accessible to members, with the authority of The Ensign and his BYU position behind it, and that remains highly problematic. Let’s focus on the ideas as written, and not the author.

Mention was made today at Church of the 1998 Ensign article “The Flood and the Tower of Babel.” That article is conspicuously absent from the manual and the CES page of resources for teaching these chapters. I hadn’t read it for a while, but someone else mentioned it leading up to this week. I actually spent nearly an hour yesterday going through that article line by line, making explicit notes on the the many problematic assumptions in it. It’s heavy on rhetoric, assertions, straw men, and speculation, and weak on definitions, evidence, and warrants.  Much broader than I recalled, it explicitly or implicitly asserts that 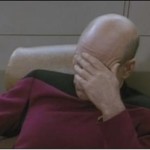 This is only a partial list, and my point here is not to rebut these, though we could do so at length for each one (or at least severely complicate them). I will merely point out two things.

First, I vehemently disagree with most of those assumptions, but I am not an Ex/disaffected/Mormonthink-type faithless scientist influenced by the devil. (NB: not suggesting this generalization exists as such, just trying to complicate the author’s simplistic dichotomy.) I am a temple-recommend-holding, Book-of-Mormon-historicity-defending, member of FAIR, FARMS author/scholarship recipient, long-time-volunteer-Institute teacher. Some of my disagreements about the author’s assumptions, though not framed in terms of his article, have or will appear in print from BYU presses. So let’s dispense with the idea that disagreement about this kind of thing constitutes lack of faith or apostasy or simple “disbelief.” (I would note that such arguments took place between, e.g. Elder Joseph Fielding Smith and President J. Reuben Clark.)

Second, the entire point of my post on the flood, a point which is certainly neither new nor original to me but well-known in the field, is something the Hebrew professor Ensign author never even appears to consider; he appears to assume that all scripture is essentially modern history. He never defends or justifies this assumption, doesn’t discuss genre in general or particular, nor the other ancient Near Eastern flood accounts, nor other scriptural challenges to a global flood, such as Genesis asserting that the nephilim and others lived before and after this flood.

He also attacks a bit of a straw man; while I do think it’s scientifically impossible to produce that much water, like my namesake King Benjamin I also “believe in God… and that he created all things, both in heaven and in earth; believe that he has all wisdom, and all power, both in heaven and in earth; [and] believe that man doth not comprehend all the things which the Lord can comprehend.” If God wants to miraculously produce enough water for a flood to cover all mountains to the height of 15 cubits, I believe He can do that.

But that is not the primary problem.

The author does not address the other, more important and significant half of the scientific possibility question. The author asserts that God does all kinds of things that science can’t explain, such as angels passing through walls and the resurrection. I agree that current science cannot explain these things, which I also believe in. But what kind of evidence would we expect these unnatural events (resurrection, angels) to leave behind? Any evidence at all, other than written accounts? (Remember that writing in the ancient world was a rare and generally unvalued skill with little practical application. I suspect most angelic visits then and now are undocumented.)

By contrast, the flood is categorically different. A flood that was

Believing in a God who can work miracles to produce the Flood does not entail that he actually did so. The alternative that God did in fact supernaturally produce the floodwaters but then chose to hide all the masses of evidence in every field… That is a trickster God, and I do not and cannot believe in a deity like that. All powerful, yes. Trickster, no.

This article harmfully promotes a Mormon form of Protestant fundamentalism, and doesn’t address the real issues in and around the text. Why is this harmful?

Perhaps you’ve heard of a recent lawsuit in England against one Thomas Spencer Monson, brought by several exMormons. (SL Trib article) As I understand it, the primary mover here is one Thomas Phillips, former Bishop, Stake President, and Area Authority Something Or Other (now the editor of MormonThink, whose claim to neutrality is laughable). Phillips apparently lost his faith over (among other things) conflict between Science and Religion, particularly what he perceived as core Mormon truth claims, such as the age of the earth and no death before the fall. Notably, Apostles have disagreed with each other over these, and the Church officially has no official position.

Phillips is not the only one to have encountered strong assertions that these (and similar things) are Official Doctrine, with negative outcomes as the result. When a Seminary teacher, Institute teacher, Ensign article, or Apostle (thank heavens Joseph Fielding Smith didn’t do it as President of the Church) goes beyond the scriptural warrant without revelation, making claims that Mormons must believe (here insert doctrines such as Young Earth Creationism, Evolution Is Evil, A Global Flood Happened c. 3000 BC, etc.), the recipient of those claims is eventually going to be exposed to actual science, instead of the pseudo-science version they were told about. If they’ve been placed into a false dichotomy of belief and epistemology (e.g. “choose between Mormonism and an ancient earth, because they’re incompatible”), they’re likely to find science much more compelling and believable. People really struggle with this. Link 1, link 2.

What’s particularly infuriating to me about all this is that is it not scripture that requires these beliefs but tradition, which can mislead us into thinking that scripture does require them, particularly if we encounter a magnified or strengthened version of that tradition. I’ve written repeatedly on how tradition and our assumptions get us into trouble, and how that plays out in reading the Bible and other books. I’ve also written about what Genesis actually teaches in context, and how it has little to do with modern scientific questions. Let’s be careful about our traditions and interpretations.  This is not a defense of “liberalism” or “disbelief” or “discounting all historicity”; recall the groups I’m associated with. Rather, this is a frustrated plea to actually read the scriptures carefully and rely on them instead of tradition, instead of assuming we know what they say, being aware of our assumptions, and proceeding cautiously. By all means, let’s listen to our spiritual leaders (all of them, not just the most assertive ones or the ones most often quoted) so we get the full range of Apostolic opinion in absence of revelation, let’s read our scriptures, let’s be guided by tradition and revelation and scholarship. But let us not be dogmatic where we are not required to be! That kind of fundamentalism has no place in the Church, and only causes severe problems.

[students] should feel free to raise honest questions, with confidence that they will be treated with respect and dignity and that their questions will be discussed intelligently in the context of faith. Where answers have not been clearly revealed, forthright acknowledgment of that fact should attend, and teachers should not present their own interpretations of such matters as the positions of the Church. Students should see exemplified in their instructors an open, appropriately tentative, tolerant approach to “gray” areas of the gospel.

Where the scriptures themselves do not clearly compel us to historicity or scientific impossibility, let us not assume it and bind it heavily upon others. Let us recognize that scripture is complicated, and not primarily history (and certainly not modern history). Genre questions must be considered when interpreting. If that doesn’t make any sense to you, read my original post on the flood.

For myself, the primary reason I reject a global historical flood is emphatically not because of “Science” but because of scriptural interpretation that considers genre and original context.

The flaws in the NT argument, i.e. “Jesus mentions Jonah/Noah/Lot’s wife, therefore these things must be histories.” Link.

The argument that scripture is made up of  different kinds of things, and a non-historical story has no effect on historical stories and vice-verse. Link

On  the dangers of confusing tradition with scripture. Link.

On the cosmology of Genesis 1 (and 6-9), and encultured prophets. Link.

← Literary OTGD #08: Go search and say
What Are Gender Roles Good For? →

53 comments for “Mormon Appropriation of Fundamentalism and Its Outcomes (u)”