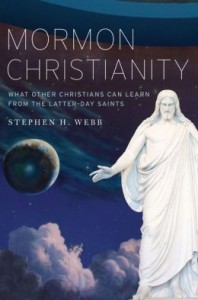 Stephen H. Webb’s Mormon Christianity: What Other Christians Can Learn From the Latter-day Saints (OUP, 2013) has a lot to offer both LDS and non-LDS readers. My acquaintance with Amazon titles on Mormonism makes me think it would have attracted a much larger non-LDS readership had it been titled How I Escaped From Mormon Christianity. Happily for mainstream LDS readers, the book is listed at Deseret Book, where an author search under “Webb” sorted by popularity puts the book just above Melodie Webb’s 250 Ways to Connect With Your Family and just below the ebook version of Isabelle Webb’s The Grecian Princess. I suppose a title like 12 Ways Mormon Christianity Can Make You Rich would have pushed it higher on the Deseret Book popularity list. All this to say I’m not sure how many from either potential audience will actually read this book. But you should.

The book does not cover the broad spectrum of Mormon doctrines but focuses on a few concepts of great interest to the author: supernaturalism, disenchantment, and an embodied God. Webb is Catholic, has a PhD from the University of Chicago, and taught philosophy and religion at Wabash College for 25 years before taking early retirement to become a full-time writer. This particular book follows from several visits to BYU and lengthy interaction with LDS scholars. LDS readers will certainly be charmed by his laudatory comments: “Studying Mormonism has made me a better Christian” (p. vii) and “I am not a Mormon, but sometimes I wish I were one” (p. 11). What really sets the book apart from other outsider treatments of LDS theology is the author’s Catholicism. He sees aspects of both Protestantism and Catholicism in Mormonism, but as a Catholic he is quite accepting of the radically hierarchical structure of the LDS Church, its well-defined membership boundaries, and its temple rituals (all things that are so objectionable to Protestants). Webb comments, “Catholicism erased my prejudices about the peculiarities of some Mormon practices …” (p. 14). He rejects the cult charge out of hand: “What is strange is not how well-adjusted most Mormons are but how cynical most Americans can be about them” (p. 44).

Supernaturalism. Chapter Two, “The Magic of Being Mormon,” covers the magic and religion topic. It turns out Catholics have been on the receiving end of Protestant religious criticism of their religious practices for centuries longer than Mormons.


During the Reformation, Protestants began interpreting medieval Christian practices as forms of magic, but their biggest target was transubstantiation. After all, a priest had to say the correct words and make all of the right gestures to ensure that the ritual worked, and the resulting transformation was invisible to the naked eye (or even a microscope). For many Protestants, every problem plaguing medieval Catholicism, from corrupt hierarchies to uneducated priests and repugnant superstitions, could be traced to transubstantiation. (p. 72)

So he can see the whole magic critique as misplaced in a way Protestant critics simply cannot. “The great majority of Americans in the nineteenth century drew no hard and fast line between religion and magic” (p. 51). Emphasizing similarities between Catholic and LDS views, he adds: “One way of understanding Mormon metaphysics is to see it as an attempt to reunite the magical and rational worldview that once was so central to Catholicism” (p. 73). How often do you see that depicted as a positive development?

Disenchantment. In Chapter Six, “How to Heal Modernity’s Spiritual Breakdown,” Webb identifies Protestant fundamentalism and Roman Catholicism as traditions with the tools and capacity to fight back against modern secularism, then argues that Mormonism should be added to that list. Now it’s obvious to me that the challenge of our time for believers of any stripe is not the challenge of other denominations (even ones that send out thousands of full-time missionaries) but the spreading apathy and skepticism of postmodernity. It’s just not often I see other Christians agreeing with that view, so I found the whole chapter quite refreshing. Having the tools and the capacity means having enough substance in the religious subculture and enough conviction in the membership to provide an actual alternative to modern secular culture (if you don’t have a real alternative worldview and lifestyle to offer, you’re simply not in the game). Webb touches on several aspects of LDS religious culture and practice that strengthen Mormon Christianity’s approach. For example:


Smith was a great devotee of ceremonialism. Critics often point out that many of the temple ordinances appear to be derived from Masonic initiation rites, and indeed, Smith joined the Freemasons in the early 1840s, the same time that he was developing the temple rituals. These criticisms miss the point. The origin of the rituals does not limit the purpose that Smith gave them. Besides, Smith had to borrow from various sources for his rituals because the Christianity of his day provided him with so few examples. … Protestants associated rituals with Roman Catholics, and anti-Catholicism was intense throughout Smith’s lifetime. Somehow, Smith managed to blend Protestantism and Catholicism long before the two camps even dreamed of ecumenical dialogue. (p. 151)

An Embodied God. This topic receives the most sustained and detailed discussion in the book, first in Chapter Three, “What’s Up With Mormons and Matter?”, then again (in more theological detail) in three appendices. Webb reviews the powerful influence of Platonic philosophy on Christian theology, which permanently soured Christian thinkers on matter clear down to the present day. He notes Joseph Smith’s view of matter and spirit: “There is no such thing as immaterial matter. All spirit is matter, but is more fine or pure …” (D&C 131:7-8). After a discussion of earlier pre-Platonic biblical precedents of “God reveal[ing] his physical form” in both the Old and New Testaments, he ends up with this declaration: “Take Plato away from Christianity, and you will get … well, you will end up with something very much like the Mormon conception of the divine” (p. 85; ellipsis in original).

There is a lot more in the chapter than I can summarize, including a long discussion of Orson Pratt’s theology of matter and the Holy Spirit. And Webb does offer criticisms, such as noting that calling spirit “spiritual matter” (or whatever is more pure and fine than matter but is not immaterial) in contrast to everyday matter doesn’t get rid of the mind-body problem. The bottom line, I think, is that any future commentator who seeks to dismiss Mormonism’s admittedly bold materialistic view of God and spirit will have to cite and discuss Webb’s serious discussion of the LDS view.

Conclusion. Webb just can’t get over how much fun it is to seriously investigate Mormon theology. “Mormonism is pre-Nicene theology in a post-Nicene world, the theological equivalent to discovering that dinosaurs are still living on some isolated island” (p. 167). He also can’t quite hide his disdain for Calvinism, which will no doubt rub some conservative Christian readers and commentators the wrong way. [Forgive me if this Mormon doesn’t feel much sympathy for dish-it-out-but-can’t-take-it Calvinists.] I doubt whether the book will really fulfill the author’s hope that other Christians can learn something from the Latter-day Saints, but I am certain that Mormon readers can learn something from Webb’s novel discussion of the Latter-day Saints.

← ‘Traditional Marriage’: what are we speaking about? An anthropological view
Introvert Nirvana →