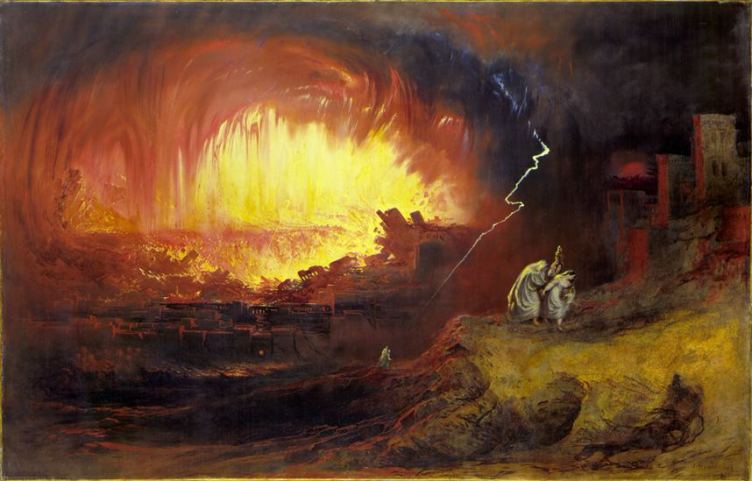 Today in Gospel Doctrine I played the role of Devil’s advocate. I spent the last 10 or 15 minutes leading a discussion about the children who died when God destroyed Sodom and Gomorrah, when God sent the Flood, when Christ died on the cross and Nephite cities were burned, buried, and sunk, and when Alma and Amulek watched as women and children were burned to death before their eyes.

Several of the commenters sought to defend God’s justice using familiar arguments (like the idea that there are some things worse than death) or evasions (like the idea that maybe there were no children in Sodom who were not already engaged in or tainted by sin). Some of these arguments make more sense than others to me, but for me no combination makes the problem go away entirely. The whole idea of using modern reasoning to try and justify these stories seems futile given the existence of ancient explanations that are, themselves, just as bad.

10 And when Amulek saw the pains of the women and children who were consuming in the fire, he also was pained; and he said unto Alma: How can we witness this awful scene? Therefore let us stretch forth our hands, and exercise the power of God which is in us, and save them from the flames.
11 But Alma said unto him: The Spirit constraineth me that I must not stretch forth mine hand; for behold the Lord receiveth them up unto himself, in glory; and he doth suffer that they may do this thing, or that the people may do this thing unto them, according to the hardness of their hearts, that the judgments which he shall exercise upon them in his wrath may be just; and the blood of the innocent shall stand as a witness against them, yea, and cry mightily against them at the last day. (Alma 14:10-11)

The idea that women and children had to die an agonizing death—and that Alma and Amulek had to witness it—so that God’s subsequent additional violence would be justified seems like a fairly horrific chain of logic. Amulek’s next statement was, “Behold, perhaps they will burn us also.” I imagine he may have said it with longing in his voice. I’m not even sure how to read Alma’s response: “Be it according to the will of the Lord. But, behold, our work is not finished; therefore they burn us not.” I hope I’m never in a position to understand it.

My first ethics professor taught me that we should read every argument twice. One with maximum skepticism, to find all the flaws. Once with maximum generosity, so that we do not miss anything that is beautiful or true, even in a flawed argument.

So yes: I disagreed with some of the impromptu theodicies I heard today. The justifications for violent commission and heartbreaking omission did not satisfy me. But at the same time, I want to honor the righteous willingness of people to speak up publicly in defense of their Father.

We are children. In all probability, the logic of our arguments is silly to God’s perspective. Just as silly as the heated debates my 5 and 7 year old get into about everything from natural disasters to homonyms. More often than not, neither one of them makes enough sense to qualify as wrong. But even children can reflect true nobility. The dogged willingness to be thought a fool rather to stay silent and leave Heavenly Father undefended exhibits childlike discipleship. When the Lord taught hard things, after all, His apostles could do no better:

67 Then said Jesus unto the twelve, Will ye also go away?
68 Then Simon Peter answered him, Lord, to whom shall we go? thou hast the words of eternal life. (John 6:67-68)

Peter didn’t have the answer. He also didn’t have any other place to go. Sometimes that’s the best we can do. In Christ’s mercy it is enough.

I tried to speak politely and encouragingly to the respondents during the lesson while at the same time making the point that their explanations were not sufficient for everyone. Obviously I didn’t want to shake testimonies or attack faith, and so I bore my testimony sincerely that I had frequently felt the love of a Heavenly Father, and believed that He does love us all. But at the same time, I wanted to demystify the experience of mystery. Confusion should not be a novelty. Perplexity should not be something we feel ashamed about and seek to hide. The same Gospel that comforts us in our darkest hours of need is also a painful goad when we feel complacent. We are consoled on the one hand and challenged on the other. I wanted to create a sense of safety for those who wrestle secretly with doubt, and call those who are more secure to a sense of compassion. We  all experience both sides of that coin at various points during our lives.

I think these are important goals. I hope I achieved them, or at least made some progress in that direction. But as I closed the lesson I had that feeling of having left something undone or unsaid. I tried to figure it out before the clock ran down, but it was only after the closing prayer had been said and the class dismissed that I was able to put my finger on it. I hadn’t said thank you.

I hadn’t expressed my gratitude and respect for the folks who played God’s advocate to my Devil’s advocate. It’s become something of a fashion these days to talk about doubt, and I believe that recognition of our uncertainties and limitations is of vital importance. But so is a willingness to risk being wrong in the interests of trying to say or do or believe something true. Doubt is a part of the larger experience of faith, but it is not the whole experience. Someone needs to play the role of promoter of the cause.

Those who are deeply troubled by the stories of pain and suffering in the scriptures or in the news may see the insufficiency of the answers God’s advocates can provide, and assume that the answers must be glib and cheap if the people who offer them really accept them. There’s a dangerous kind of smugness to that attitude. After all, which of us who have not seen what Alma has seen has any right to judge his heart?

← Compassion-and-service
An Offhand Apologia of Sorts, and some Reflections →

27 comments for “Thanking God’s Advocates, the Promoters of the Cause”