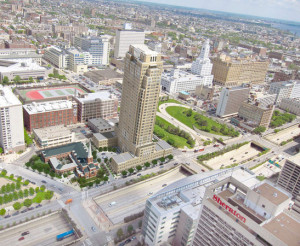 I’ve written about the fallibility of our leaders before (here, here, and here) because I think it’s important for us as members to develop greater spiritual independence and because the unrealistic expectations held for the leaders (as often by the critics as by the devout) set people up for unnecessary disappointment. But the concept of fallibility, like the even trendier concept of doubt, can be overplayed. Leaders are fallible, yes, but that doesn’t preclude room for trust.

The proximate cause of my ruminations was the announcement of the Church’s addition of a chapel and a commercial apartment tower next to the Philadelphia temple site. Based on reporting in the New York Times and Philadelphia Inquirer, local reception of the proposed projects is quite enthusiastic. From the NYT:

[Philadelphia’s] deputy mayor for economic development… praised the church for taking a step that private developers were less likely to tackle, that is, committing to such a project without more evidence of economic vitality in the surrounding neighborhood.

They [the Church’s developments] could end up as one of the most civic-minded projects now being built in Philadelphia.

The Inquirer was notably less enthusiastic about the aesthetics of the project (“The collection of architectural pastiches promises to be one of the weirder ensembles produced in 21st-century America outside of Las Vegas.”), but from everything I’ve been able to determine the residents of Philadelphia are happy to have the projects, both for the economic boost from the construction and for the longer-run contribution to revitalizing their city.

In stark contrast to this warm reception, however, I’ve seen numerous examples of Mormons decrying the Church’s profiteering ways and alleging abuse of sacred tithing funds (with numerous references to the controversial City Creek Center project.)

My understanding of the history of the project is that when construction started on the Philadelphia Temple (about a year ago) the lot where the chapel and 32-story apartment building will be built was owned and planned for development by another firm. Only after that developer abandoned their plans did  the Church buy the lot and draw up the plans for development there. The New York Times reported that Property Reserve, Inc. (a real estate investment affiliate of The Church of Jesus Christ of Latter-day Saints) moved forward with the apartment tower because “the project … represents an investment opportunity for the church in a strengthening real estate market that is benefitting from a growing move from the suburbs to the city.” Tom King, a director of Property Reserve, is quoted in the Times saying “There was a portion of the site left over after the meeting house and that coincided with residential housing need.” It appears the investment arm of the Church happened to find a newly available lot in a desirable location right next to an ongoing temple project, but the two ventures are not linked other than by coincidence.

In fact, the only discrepancy I found between public accounts from Philadelphia politicians and the Church about the apartment building is that the latter emphasized that this was a sound investment rather than a community project. This isn’t a contradiction of fact, but simply a difference of emphasis. And it’s a telling one.

For those who view any and all connections between the Church and the world of finance as suspicious, I don’t think that any reasonable reply can be made. The Church, as a large institution, requires considerable funds to operate. To keep those funds in a bank would not keep the Church out of the realm of commerce (after all, banks use deposits to make loans). All it would accomplish would be to waste Church funds (due to lower interest rates) and hand over the power to decide how those funds ought to be invested to third parties. This would be, in essence, little more than a symbolic washing of hands.

In addition, it’s important to keep the historical context for the Church’s view on finances in mind. Institutions have long memories, and by those standards it was not very long ago that the Church was brought to the verge of insolvency by persecution. Given past experiences, it is no wonder that the Church takes the issue of financial independence and self-reliance very, very seriously.

This was most recently reiterated by Elder Bednar in the October 2013 General Conference talk “The Windows of Heaven.” This talk, however, borrowed heavily from an earlier 1991 talk given by President Hinckley (“The State of the Church”) where he explained the Church’s need to invest funds in historical context (this time citing personal rather than institutional perspective):

Some of us, I submit, are old enough to remember vividly the dark times of the Great Depression of the thirties. I hope we shall never see such again. But we know that they are not outside the realm of possibility. We are mindful of the story of Pharaoh’s dream of the fat and lean cattle and the full and thin ears of corn.

Philadelphia politicians are quick to thank the Church for its generous contribution to the downtown area. That is what matters to their constituents. By contrast, the folks at Property Reserve, Inc. have emphasized the high quality of the investment opportunity because their interests lie in serving and protecting the temporal interests of the Church. Given the necessity of managing large funds, proactively investing them for profit ventures strikes me as the most fiscally prudent and morally responsible course to take.

At a more abstract level it is worth pointing out that while leaders of the Church and employees of the Church and its investment affiliates are not perfect, we ought give them the same benefit of the doubt that we would extend to any other ordinary member of our faith community. It’s one thing to draw a distinction between a leader’s individual understanding of doctrine and revelation and the official canon or to observe that, in their day-to-day interactions, leaders are prone to the same faults as any other human being. It’s another to think that, given ample time for consideration and the prospect of spending tens of millions of dollars, our leaders wouldn’t be able to exercise competent oversight of major, media-scrutinized endeavors. Big claims call for big evidence, and I don’t see any basis for concern with these projects other than, of course, the discomfort some people have in having the Church deal with large financial investments at all. From my point of view, clearly the Church should never exist for the purpose of financial investment, but just as clearly financial investment is a necessary element of the Church’s existence.

I am not suggesting that our leaders can do no wrong. I’m simply saying that we ought to be willing to give them the benefit of the doubt while we investigate and consider their actions and decisions and that, furthermore, nothing I’ve found so far in the Philadelphia project gives cause for concern or misgiving. The Church has lots of money, and the Church has invested some of it in a prudent and ethical commercial venture. I’m OK with that.

← What are the best Ensign articles?
The Desolation of Noah: An Unexpected Explanation →