It was the day before the first day of school. That meant is was time for the annual “back-to-school” father’s blessings. This has been a tradition in our house, as it is with many families. However, that year felt a little different. Todd, my oldest , was starting middle school. Geneva, my youngest, was starting full-day Kindergarten. It is a year of transition.

Shem, the new 4th grader, went first. I will not go into the details of the blessings themselves, but I love the intimacy of such blessings. I love the feel of their hair as I place my hands up their head. My hands on their head often reminds me of how little they really still are.

Geneva was next. A year before we were very nervous about her education. However, her speech had improved greatly and we now feel that she is ready to conquer Kindergarten…and the world. 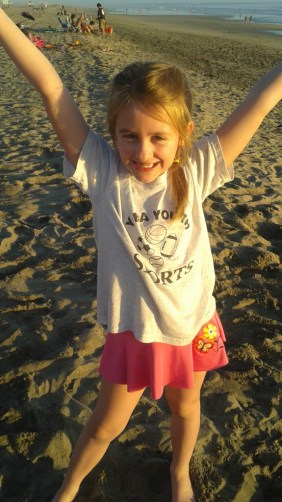 She was standing by the chair…ready to assist in the blessing of her brother Todd.

And she was pumped and ready to go. She had seen people at church during the setting apart of presidencies. Once a president or counselor is set apart, they join in with the circle for the next blessing. Geneva was ready to do the same.

Or maybe she has been reading Stapley and Wright and she knew that girls have done this laying-on-of-hands-thing before.

My first reaction was one of pride. Pride in my bold little girl. She was ready to jump into the good work.

Now, Geneva is a feminist in training. That is for sure. She already thinks that Kristine Haglund and Tracy McKay are awesome. She is also a strong willed and determine little one.

Geneva loves the limelight and the blessings were taking place on center stage. She does love praying. Our morning family prayers are officially her responsibility. Nobody else is allow to offer that prayer and it has been that way for years now . While my boys might groan when asked to pray, Geneva might be disappointed when she is not picked (as a result…she gets picked a lot),

I briefly thought about letting her join in the circle. However, I did not want Todd’s blessing to be about Geneva. I explained to her that Daddy would give Todd the blessing. Not because she is a girl, but because everyone was getting a special blessing from Dad and now was Todd’s turn.

I did not tell her that girls don’t give blessings. They don’t much anymore, but that was not the message I wanted to send. I do not let my young boys join in blessings, yet they someday will. My oldest, Todd (13) is now a deacon and will become a teacher when he turns 14 next month. Shem (11) is turning 12 on Thursday.  This past Sunday, we attended a special fireside just for him (he is the only 11-year-old boy in the ward) that introduced him to deacon’s quorum and the Aaronic Priesthood.

Buy what about Geneva? She will be keenly aware of being left out. I will also be aware of her exclusion. It already pains me to think of it. It may pain me more than it does her. Also, I know as a social scientist that the symbolic messages sent by such exclusions are real. Even if my wife and I teach her an egalitarian approach to religion, the messages of inequality will be stuck in her head.

More important than  protecting her, I want her to flourish. She plans on being a dentist when she grows up, but I do not think any of us are fully aware of the great things she will accomplish or the ways that she will influence the world around her. Does this require the priesthood? No. I do not think anyone needs the priesthood to flourish. But I worry about anything that will make her doubt her potential. Of course, if you have ever met her, you know that she is a confident and strong. Maybe I worry too much.

I have been thinking about these issues in the abstract for a long time. Susan Moller Okin is a political theorist who has heavily influenced me and her arguments heavily shaped my master’s thesis. She argues that feminism is about the full recognition of the human dignity of women. As a feminist father, and more importantly as Geneva’s father, these issues are real to me more than ever.. 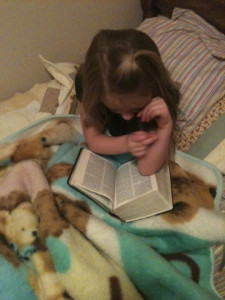 Geneva feasting on the word.

However, I think my feelings about female ordination have more to do with the feminist ethic of care. The ethic of care is rooted in a concern for those that we have an ethical and emotional connection with and an obligation to care for. . This obligation is rooted in our loving relationship and not out of abstract principal. I can imagine a categorical imperative to care for and protect my children, but that is not why I do it. The ethic of care also rejects the cold impartiality that has come with much of modern moral and political thinking.

For me, this is very much about feeling and not equality. Nor is about 21st century social norms. Such abstractions have little to do with the relationship I have with my daughter.  I do think that exclusion and inequality undermine the prospects of Zion community, let alone Zion families. But this is a matter of lived religious experience and not 21st century norms.

A movement that is based on these shared horizons, rather than one of struggle amidst a clash of cultures, is what I am hoping and looking for. I am still looking. Not for me. I am happy being the cranky gadfly. But I hope for it for Geneva, Shem, and Todd.

Note: This is an updated and expanded version of a post I wrote for FPR back in 2012.