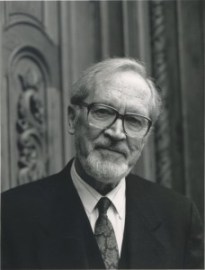 Given how much we talk about Joseph Smith in lessons such as lesson 7 of the Presidents of the Church: Joseph Fielding Smith manual used in Priesthood and Relief Society meetings, you might think I would run out of poetry about him. That isn’t likely to happen. Smith is also a common subject of Mormon poetry — but nowhere near as common a subject as Christ. As the prophet who introduced the current dispensation, restoring the gospel to the earth, according to what we teach, Joseph Smith’s role and the restoration he initiated and shepherded is vital to the world today, a foundational element of both Mormon theology and culture. The following poem makes the connection between this event and Mormon culture and history. Its author is William Mulder, best remembered as a long-time English professor at the University of Utah. Born in Holland, he immigrated with his parents to the U.S. in 1920 and to Utah in 1926. He graduated from the University of Utah in 1940 and earned a Ph.D. from Harvard a decade later. In the 1950s he joined the faculty at the U, where he taught for 41 years, and was part of a group of LDS intellectuals there known as the “Swearing Elders.” He wrote several books on Mormon history and culture, including Homeward To Zion: The Mormon Migration from Scandinavia

and The Mormons in American History (University of Utah Frederick William)

Perhaps I’ll never see the Father face to face,
But I have bowed my head where Joseph knelt
And, moving lips in silent prayer, have felt
The quiet rapture of that sacred place.

The trees in their familiar whisperings
Bore witness, and the very atmosphere
Confirmed what I dared only hope before:
I felt the truth the inward vision brings.

The glory of the grove still lights my way
As it once lighted Carthage, Liberty,
Nauvoo, the westward march – and constantly
The vision shines upon the church today.

The Restoration comes each spring again
To bring me close to God and to my fellow men.

Mulder’s sonnet brings the restoration to today. Next time I get to the Sacred Grove, I think I’ll bring this along to read. And, maybe I can read it each Spring…