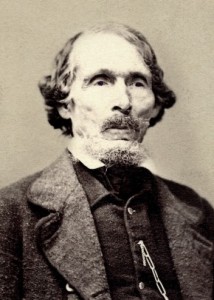 Of course, looking at the reason for a Church is nothing new. Early Mormons struggled with aspects of this, since many of them were influenced by the congregationalist models of other restorationist churches, in which local pastors are selected by the deacons of each congregation, and were against the traditional model of the Church of England.

The following poem shows some of these tensions and gives a broad vision of what the role of the Church is.

This poem, a hymn included in the first LDS hymnal, is another in the oerve of the prolific William W. Phelps. Unlike his contemporaries Parley P. Pratt, Eliza R. Snow and John Lyon, Phelps never published a volume of his own poetry. He is also unique because he is likely the author of the only poem, outside of scripture, attributed to Joseph Smith (The Vision, a paraphrase of D&C 76). If I recall correctly, he is still the Mormon author with the most hymns in the current hymnal.

What fair one is this, from the wilderness trav’ling

What fair one is this, from the wilderness trav’ling,
Looking for Christ, the belov’d of her heart?
O, this is the church, the fair bride of the Savior,
Which with every idol is willing to part.
While men in contention, are constantly howling,
And Babylon’s bells are constantly tolling,
As though all the craft of her merchants was failing,
And Jesus was coming to reign on the earth.

There is a sweet sound in the gospel of heaven,
And people are joyful when they understand
The saints on their way home to glory, are even
Determin’d by goodness, to reach the blest land.
Old formal professors are crying “delusion,”
And high-minded hypocrites say “’tis confusion,
While grace is poured out in a blessed effusion,
And saints are rejoicing to see priest-craft fall.

A blessing, a blessing, the Savior is coming,
As prophets and pilgrims of old have declar’d;
And Israel, the favor’d of God, is beginning
To come to the feast for the righteous prepar’d.
In the desert are fountains continually springing,
The heavenly music of Zion is ringing;
The saints all their tithes and their off’rings are bringing;
They thus prove the Lord and his blessing receive.

The name of Jehovah is worthy of praising,
And so is the Savior an excellent theme;
The elders of Israel a standard are raising,
And call on all nations to come to the same:
These elders go forth and the gospel are preaching,
And all that will hear them, they freely are teaching,
And thus is the vision of Daniel fulfilling:
The stone of the mountain will soon fill the earth.

There is a clear millenarian theme in almost all of Phelps’ poetry, and this hymn is no exception. The church, the “fair one” is searching for Christ to be brought up to heaven at the last day. But some of that feeling can be seen in the statements that Joseph Fielding Smith makes. If nothing else, Smith speaks of the prophesied spread of the Church throughout the world, and Phelps in the last paragraph talks of “the elders [going] forth and the gospel… preaching,” suggesting that:

And thus is the vision of Daniel fulfilling:
The stone of the mountain will soon fill the earth.

But the poem also puts the Church in contrast to more traditional churches, from which:

Old formal professors are crying “delusion,”
And high-minded hypocrites say “’tis confusion,
While grace is poured out in a blessed effusion,
And saints are rejoicing to see priest-craft fall.

While I like Phelps’ imagry of the “fair one” searching for Christ, I don’t think it works as well as it should. Yes, we are seeking Christ, but we are also led in that search, and Phelps leaves out any nod to that leadership, similar to the views of other restorationist Churches of his day. Perhaps that is why this hymn is no longer in our hymnals today.

3 comments for “Literary Joseph Fielding Smith #08: What fair one is this, from the wilderness trav’ling”