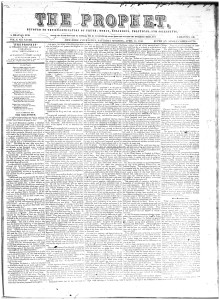 [I’m sorry that I’m a bit behind in getting these posted. I’m hoping to do one each night for the next 3 nights to get caught up.]

Worse, as Joseph’s story indicates, even when we have acted properly, we can be seen as a sinner or in error, and treated accordingly. Sometimes this is because others are mistaken, and other times it is because those who judge have different values from ours.

The following poem claims that, even though others mistakenly found Joseph guilty, he still won the approval of the Lord.

This is one of the few poems that I’ve included which are Mormon only by virtue of being published in a Mormon publication. Its by the Rev. David Millard, in the 1830s and 1840s one of the leaders of the Christian Connection, a predecessor of the United Church of Christ. Like Mormonism, Connexionalism was a restorationist movement that didn’t believe in creeds. Millard was for a time editor of the Christian Palladium, a New York-based religious newspaper for the Christian Connection, where this poem appeared and from where the Mormon newspaper in New York City, The Prophet, copied it.

Joseph, thou wast made to shine,

When thou spurned seductive pow’r;

Sure thy father’s God was thine,

‘Potiphar has raised my state—

‘Can I basely wrong my lord?

‘Act the treacherous part I hate’

(line illegible in my copy)

‘Gave me favor, led me here;

‘He protects the path I love,

‘While to sin I greatly fear.’

With threats that pow’r alone could join,

Could not bend that purpose pure,

Which, fair Hebrew youth, was thine.

While the storm broke on they head!

But that doom to glory led!

Ye who know the adverse hour

Think of Joseph, once disgraced,

See him next in grandeur placed,

Clothed with power, and raised to fame.

The Prophet, 19 April 1845, p. 4
Reprinted from the Christian Palladium

I think Millard manages to liken the story of Joseph to our lives today. After observing that “Sad thy fate—a felon’s doom! / But that doom to glory led!” he points out:

Perhaps he should have written “Tender mercies” to fit our Mormon sensibilities today.

← Openings and Beginnings
Literary Joseph Fielding Smith #08: What fair one is this, from the wilderness trav’ling →