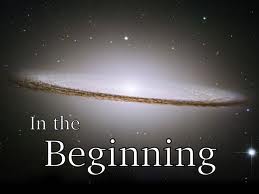 When we read scripture, we generally start at the beginning. This is one reason why openings — first lines, first paragraphs — are so important. They set the scene for what is to follow. They set the context and frame our understanding for entire chapters and books to follow. Terry Eagleton has a lot to say about openings in his How to Read Literature (Yale Univ. Press, 2013). While his focus is on literature, not scripture per se, his comments are helpful because scripture is a form of literature. And when it comes to how to read our scriptures, we Mormons certainly need all the help we can get.

So here is some commentary from our literary critic. Just to help us see the relevance to the scriptural discussion to follow, I will add “scripture” in brackets following Eagleton’s term “literature”:

Almost all literary [scriptural] works begin by using words that have been used countless times before, though not necessarily in this particular combination. We can grasp the meaning of these opening sentences only because we come to them with a frame of cultural reference which allows us to do so. We also approach them with some conception of what a literary [scriptural] work is, what is meant by a beginning, and so on. In this sense, no literary [scriptural] opening is ever really absolute. All reading involves a fair amount of stage setting. A lot of things must already be in place simply for a text to be intelligible. One of them is previous works of literature [scripture]. Every literary [scriptural] work harks back, if only unconsciously, to other works. Yet the opening of a poem or novel also seems to spring out of a kind of silence, since it inaugurates a fictional world that did not exist before. (p. 7-8)

Here is a literary opening you have heard before.

In three words, that opening identifies the narrator, gives us his name, and adopts a first-person viewpoint. The name itself brings to mind the biblical Ishmael. Apart from the words, the reader knows that she is reading a novel, so Eagleton’s last sentence (“it inaugurates a fictional world that did not exist before”) applies. And the reader likely knows before encountering the first line that she is reading a great American novel, perhaps the great American novel. That raises expectations and invites the reader to read a little deeper or at least withhold judgment. Instead of saying “What a stupid line to start a book with,” the reader is likely to wait and see what Melville is up to if she thinks she is reading the great American novel. So, borrowing a term from Eagleton’s paragraph, I think we can expand the opening sentence of this post to: When we read scripture, we generally start at the beginning and bring a frame of cultural reference with us. 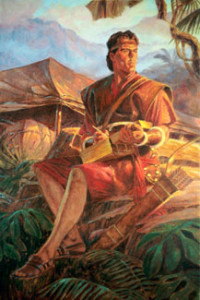 Now for a scriptural opening I know you have read before.

Let’s stop there for a moment. As in Melville’s three word opening, these two words identify the narrator, give us his name, and adopt a first-person viewpoint. Nephi has no particular association for most readers, but a particularly astute student of the Bible might connect it to Genesis 6:1-4, the enigmatic passage where sons of God and daughters of men get together, resulting in nephilim, their offspring. The term is also used at Numbers 13:32-33 to refer to some pre-Israelite inhabitants of Canaan. They were described as giant-like. Nephi later describes himself as “large in stature” (1 Ne. 2:16).

Let’s take a little more of that opening.

I, Nephi, having been born of goodly parents, therefore I was taught somewhat in all the learning of my father; and having seen many afflictions in the course of my days, nevertheless, having been highly favored of the Lord in all my days; yea, having had a great knowledge of the goodness and the mysteries of God, therefore I make a record of my proceedings in my days.

So Nephi has parents, and a learned father, and was taught some of what his father knew. From this mouthful of an opening sentence, the reader also gets a sense of the somewhat stilted English language and phrasing featured throughout the book. If your English teacher made you diagram this sentence, you would get at least six clauses, with the main active verb (“make”) appearing in the last clause, separated from the subject (“I, Nephi”) by 57 words, including two therefores and a nevertheless.

What about that frame of cultural reference? Almost every adult reader who reads this line for the first time knows the Book of Mormon claims to be a book of scripture. If missionaries have given a copy to someone they are teaching, that reader is also given some context (the narrative starts near Jerusalem but quickly moves to the Americas) and a rather unique literary challenge (after reading for awhile, you should ponder and pray to learn from God that the book is true). A lifelong Mormon who has never bothered to read the book before, or even an LDS child who jumps in at a young age, comes with similar but stronger views, probably confident that the book is true before even reading the first line.

This exercise illustrates that openings do a lot of work and merit our close attention, but also shows how much baggage we bring along as a reader. It perhaps even invites us to attempt to discard some of those presuppositions and read with fresh eyes, or to consider whether earlier readers or the intended audience of first readers brought different presuppositions to the text. It invites reflection on genre, beyond the simple categories of fiction (or myth) and nonfiction (or history) that we misleadingly apply to ancient scriptural narratives.

I will quickly throw in a few more scriptural openings.

In the beginning God created the heaven and the earth.

The Hebrew term translated as “God” is “Elohim,” which scholars regard as the Hebrew generic word for God but which Mormons regard as the proper name for God the Father.

As Eagleton noted, a reader brings knowledge of earlier literature [scripture] to a new work. Every reader will link the “in the beginning” of John 1:1 back to Genesis 1:1. Early readers who encountered the Greek term logos (the Word) likely associated it with its frequent usage in the Septuagint and/or its use by Greek philosophers. A rich term, it carried many meanings, and Christian appropriation of the term expanded its range of meaning even further. 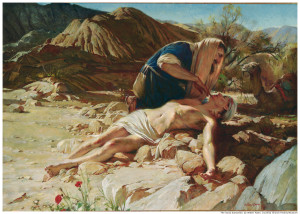 Take a smaller narrative unit and focus on genre.

A certain man went down from Jerusalem to Jericho, and fell among thieves, which stripped him of his raiment, and wounded him, and departed, leaving him half dead.

We sense it would be wrong to ask, “What was his name?” or “How many thieves?” Embedded within the book of Luke, which we take to be a more or less historical narrative, are parables which we take to be more or less fictional. Yet Jerusalem and Jericho are actual places and the parable lays out a plausible set of events. Oddly, whether the events of the Parable of the Good Samaritan were entirely made up for teaching purposes or were an accurate account of an actual Jew who encountered actual thieves and was later helped by an actual Samaritan seems to make little or no difference to the reader.

As long as we’re in the gospels, look at how much gets done in the first verse of Mark.

The beginning of the gospel of Jesus Christ, the Son of God.

Again, an allusion to Genesis 1:1 (the Greek term “arche” for beginning is also used in John 1:1). The Greek form “Jesus” rather than Joshua. The title “Christos” as Christ, which becomes a compound name “Jesus Christ,” although in real life he was likely never publicly referred to as “Joshua the Messiah.” And the term “Son of God,” which also carried earlier meanings for Jewish and gentile readers. “Son of God” appears in some early manuscripts but not others, suggesting it was added to the text. (Christian scribes copying the text would be unlikely to remove it.)

Let’s look at a few more LDS openings. Consider how Moses 2:1 (Moses is simply the first 8 chapters of the Joseph Smith Translation of the Bible) changes Genesis 1:1 from an anonymous third-person narrative to God addressing Moses in the first person.

In the beginning I created the heaven, and the earth upon which thou standest.

Another first-person beginning at Abraham 1:1.

In the land of the Chaldeans, at the residence of my fathers, I, Abraham, saw that it was needful for me to obtain another place of residence.

There are echoes of 1 Nephi 1:1, with a reference to fathers and the appositive “I, Nephi” form. Even God uses the appositive: “And I, God, said: Let there be light; and there was light” (Moses 2:3).

Mormon’s beginning to the Words of Mormon, a short section sandwiched between the end of Nephi’s first-person account as completed by other writers, the last being Ameliki, and Mormon’s own earlier third-person abridgement that begins at Mosiah 1 (which we are told is actually Mosiah 3, the first two chapters having been part of the lost 116 pages that were not retranslated).

And now I, Mormon, being about to deliver up the record which I have been making into the hands of my son Moroni, behold I have witnessed almost all the destruction of my people, the Nephites.

And here is Moroni’s beginning to his own abridged account of the Jaredites at Ether 1:1.

And now I, Moroni, proceed to give an account of those ancient inhabitants who were destroyed by the hand of the Lord upon the face of this north country.

Again, a named first-person narrator. The framing: those earlier inhabitants didn’t just kill each other in a down-to-the-last-man civil war, it was the Lord who destroyed them.

One more update, then, to my one-sentence summary: When we read scripture, we generally start at the beginning, which frames the narrative to follow, and bring our own frame of cultural reference with us, in particular earlier scripture.

Any favorite literary or scriptural openings you would like to add? Any literary scholars or students want to add to the discussion?

6 comments for “Openings and Beginnings”