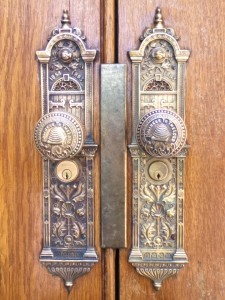 One of the gems of my mission was the opportunity to spend an evening with a Bishop from the RLDS (now Community of Christ) Church in central Missouri[1]. Retrospectively I can appreciate how gracious and patient he was with us, and I hope that I have since adopted some of his approach in my inter-faith conversations with the a priori convinced.

One of the sincere questions I posed to him concerned the (then) recent RLDS decision to ordain women to the priesthood and subsequent acceptance of women into the Quorum of Apostles. I was intensely curious to hear his understanding and justification of these events. And I was scandalized by his response.

To be clear, I was not scandalized or upset by the idea of priestesses. Rather I was scandalized by his account of how and why the change occurred:

“Well, we sort of came to a point in our history where this question was conspicuous for us: why don’t we ordain women? And we decided to take it seriously. We searched the scriptures and saw that there was no injunction in either ancient or modern scripture against women’s holding the priesthood. Given the lack of any revelatory prohibition, we realized that the reason we had never ordained women was cultural – it came from the 19th century context in which our church was born. And with that, we decided to ordain them!”

My quote here is obviously not a quote – it’s my best attempt fifteen years later to verbalize the emotional and conceptual remnants of a conversation that has grown in importance for me as time goes on. Candid, pragmatic. Even casual. And that is why I was scandalized.

I’d spent the last eighteen months dedicated to sharing my belief in modern day prophets. There was this boy, Joseph Smith, who opened the heavens – not just for a moment, but in a way arresting the heavens, working with angels to erect an institution that enabled a covenant people to realize their privilege as the children of God and go to God – as a family – and get revelation. Yes, along with the rest of Christianity and numerous other faiths we believe in our ability to receive individual guidance. But additionally, we believe in ourselves as a people, with a mouthpiece – admittedly a human mouthpiece, human like the rest of us, but who nonetheless receives an ancient mantel and can, amidst all of the confusion of this world, obtain the mind and will of the Lord on our collective behalf. This was a radical idea, and a radical blessing. And it was worth spending two years of my life to share with others.

What was the point of the Restoration if not to establish us as a covenant people with an ability to petition the heavens and receive answers? What is the point of a Restored Church if not to provide a structure and space where this can happen? What is the point of a Prophet (as opposed to, say, a representative council) if not to play this crucial role? The priesthood is not meant to be mere institutional authority, distributed as best meets organizational needs – rather it is meant to be one of the blessings God has given us to facilitate our becoming like God, a literally efficacious use of the powers of heaven that allows us to act as Saviors on Mt. Zion. And it has been given to us – as it was given to Abraham – because we sought after it and have kept the covenant associated with it.

If who ought to have and be authorized to operate this power in our Mormon family has become a conspicuous matter for us, isn’t this exactly what a prophet is for?[3] At this point, I think we’re all still together – we’re all nodding our heads and saying, “Yes!” (or, at least, large numbers on all sides are).

I think Joseph Smith was an organizational genius – or at least listened well to others who were. As was Brigham Young. We’ve thrived as a people for almost two centuries not simply on the power of the Restoration message and the sacral artifacts Joseph brought forth, but also on account of effective organization. This question of how a worldwide church grants access to its top leadership, however, is not one that occurred to Joseph. For three quarters of our existence we’ve been a small and highly connected community. This has changed in recent decades.

There are tens of thousands for whom equality generally is literally a spiritually trophic issue, and who are doing their best to enter into dialogue with our prophets, seers, and revelators. How can they faithfully do so? Individually we’re discouraged from writing letters to our General Authorities – instead we’re told to counsel with our local leaders. But I don’t share local leaders with the thousands of my sisters and brothers who are seeking an answer on this question. What are we to do?

There are also those for whom this is not quite so pressing, even if they recognize how serious it is to the rest of us[5]. Unfortunately, I think that they often get distracted in the minutiae, in the banality of such things as whether it is legally prudent for the Church to request its members not to speak with the press during General Conference on Temple Square. Occasionally some go further and attempt to give their substantive opinions on the matter of how we ought to respond to collective crises. But alas, that’s all they are – opinions. No one can say at this point, “Here, this is how to collectively and faithfully petition our governing councils, this is the nature of the Church as an institution, and here is the sanctioned means whereby significant portions of the church gain access to our leadership.”

In addition to my prayers on the substantive matter of women’s equality, I offer my prayers that the leadership of our Church will be given divine wisdom in how to make the transition to authentic and substantive connection in a world-wide Church.

If standing in line along with everyone else and asking to be let in to a session of General Conference is unreasonable activity, what is reasonable?

[1] He’d been a lifelong member, and as a Bishop oversaw a dozen or so congregations. As far as I can tell, his role was something like a more ecclesiastically engaged Stake President. Given the size of the RLDS Church, it might be more accurate to compare him to an Area President.

[3] Note: I don’t think that our prophets are there only for major, doctrinally relevant changes like who receives the privilege of priesthood ordination, but also the host of thorny structural and logistical issues that are so deeply relevant to the question of equality. This set of questions really is distinct from the question of ordination, even if the two are currently strongly linked in our discussions.

[4] And there isn’t. It’s an empirical fact. We have lots and lots of folks with different opinions that they consider to be the authoritative, doctrinal answers to the question – but they’re simply wrong. As in, their opinions might ultimately be vindicated as substantively correct, but currently we don’t have the revealed light and knowledge necessary to vindicate them.

[5] I’m not talking about the frenzied hoards spewing vitriol at faithful feminists. Those folks excommunicate themselves from any serious dialogue. Rather I’m talking about those who are trying to substantively engage feminists, while disagreeing with their ideas, proposals, philosophical assumption, methodologies, or actions.

← So Who Gets a Press Conference in Front of the Tabernacle?
Literary Joseph Fielding Smith #09: James H. Hart’s Interview with David Whitmer →