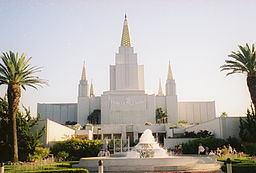 So here is what Elder Oaks had to say on the subject:

With the exception of the sacred work that sisters do in the temple under the keys held by the temple president, which I will describe hereafter, only one who holds a priesthood office can officiate in a priesthood ordinance.

The syntax of that sentence is a little complex, but I am pretty sure that what he is saying here is this: in the temple, women officiate in priesthood ordinances.

This is a very important idea. It is not frequently discussed in the church, especially in official outlets. I’m hard-pressed to think of a recent, official statement that states this idea so precisely.  I think a lot of discussions of women and priesthood suffer from the fact that many people (myself included) are often hesitant to talk about what women do in the temple and how that work should impact our thinking about the relationship of women and the priesthood. If we are going to follow Elder Oaks and feel comfortable saying publicly that women officiate in priesthood ordinances in the temple, then we’ve really changed the terms of the debate. “Why don’t Mormon women have the priesthood?” is no longer the question. The questions are:

* Given that the temple is our most sacred space, what should we conclude from the fact that women officiate in priesthood ordinances in the temple?

More important than reframing the conversation, however, is the impact that public recognition of women’s temple-based ordinance officiation should have on our apologetics for our male-only non-temple priesthood. All of those theories about women being more spiritual than men, women having motherhood instead of the priesthood, men having some lack that the priesthood compensates for, men’s and women’s different essential attributes, appeals to the eternal order, appeals to scripture, etc., should be re-examined in light of the realization that they do not apply within the walls of the temple.

There’s one loose end here: while Elder Oaks seems to me to be saying that women officiate in priesthood ordinances in the temple, he later quotes Joseph Fielding Smith (then President of the Quorum of the Twelve):

While the sisters have not been given the Priesthood, it has not been conferred upon them, that does not mean that the Lord has not given unto them authority. … A person may have authority given to him, or a sister to her, to do certain things in the Church that are binding and absolutely necessary for our salvation, such as the work that our sisters do in the House of the Lord. They have authority given unto them to do some great and wonderful things, sacred unto the Lord, and binding just as thoroughly as are the blessings that are given by the men who hold the Priesthood.

We are not accustomed to speaking of women having the authority of the priesthood in their Church callings, but what other authority can it be?

Elder Oaks and President Smith seem to disagree here. (And maybe on a semantic matter as well: compare footnote 7 and footnote 11.) I’m cool with that; I don’t expect complete univocality from church leaders. I think it might indicate that we have a lot of work left to do on separating and thinking about the strands of priesthood, authority, keys, power, and blessings. I’m glad that Elder Oaks advanced the conversation in this talk. We’ve heard a lot in the past the line that “women have access to all of the blessings of the priesthood,” which, to me, is a terrible response to the issue, for reasons that I won’t go into here. Elder Oaks has done one better by showing how women have access to (some of) the authority and power of the priesthood, if not the keys. There’s a lot more that could be said about that aspect of his analysis, but that’s a topic for another post.

Note: I’m not willing to go any farther than Elder Oaks did in discussing the temple, and so I’ll delete comments that, in my opinion, say too much about the temple just as soon as I see them.

44 comments for “Elder Oaks on Women, Priesthood, and the Temple”