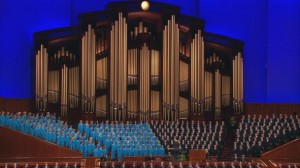 Welcome to T&S sort-of live coverage of General Conference. President Uchtdorf conducted this opening session with President Monson (in attendance) presiding. Opening prayer by Carl B. Cook, a Seventy, and music by the Mormon Tabernacle Choir. Direct quotations of a speaker are given in quotation marks or blockquote form; other text represents my own summary of their remarks or, where noted, my own comments.

President Thomas S. Monson opened the session by reporting the dedication of the Gilbert Arizona Temple one month ago, the 142nd operating temple of the Church. There will be 170 temples when those currently announced and under construction are completed and dedicated, but no new temples to be announced today or in the immediate future.

Elder Jeffrey R. Holland of the Twelve addressed the trials of being a Latter-day Saint and how to gently defend the faith. Reviews how Jesus was rejected by the Jews of his day. Provincial, patriarchal, bigoted … latter-day prophets and disciples are called these and other derogatory terms. We don’t preach easy doctrine: avoid transgression; avoid even thinking about transgressing. “Be strong; live the gospel; defend your beliefs with compassion and courtesy, but defend them.” You will find safety against the winds that blow.

Elder Ronald A. Rasband of the Presidency of the Seventy talked about the tornadoes that his Oklahoma City last year (with images of yellow-shirted Helping Hands volunteers assisting the cleanup). Temporal possessions can be swept away in just minutes; lay up treasures in heaven by using your time, talents, and energies in serving the Lord. Reads account of an LDS fifth-grader who, along with other students, hid in a restroom as a tornado hit the school and tore the roof off. “I will be on your right hand and your left; … angels of the Lord will bear you up.” Help others in their time of need; bear each others burdens.

Elder Carlos H. Amado of the Seventy spoke about Christ the Redeemer. Power over death; a new commandment to love one another; Gethsemane; crucifixion; work among the dead; Second Coming.

Elder Neil L. Andersen of the Twelve talked about spiritual whirlwinds, some of your own making, some from the choices of others, and some because that’s just what happens in mortality. Trees that grow in windy environments are stronger, with deeper roots; “the whirlwinds in your youth … can increase your spiritual strength.” Changes in the civil law cannot change the moral law that God has established, such as the law of chastity, sexual relations only between a man and woman lawfully married (see Proclamation on the Family). The Lord has not redefined marriage. Teen who posted endoresement of traditional marraige on Facebook got lots of online pushback. “Sometimes you have to stand alone,” she said. Everyone deserves our kindness and consideration (whatever their views on marriage, etc.). Beware of self-righteousness, warned Joseph Smith. No place for bullying or bigotry. Give heed to the words of the prophets (even if they contradict your personal views). Recommends temple attendance (85% of Church members live within 200 miles of a temple). “The peace of the Savior subdues the swirling whirlwinds of the world.”

President Henry B. Eyring talked about a heritage of hope, and related the story of his great-grandfather in Germany. An orphan, he left Germany for America and ended up in St. Louis, where he encountered LDS missionaries and joined the Church in March 1855. He served as a missionary to the Indian Territories for six years, moved to Southern Utah, then served another mission back to Germany. He is an example of faith and hope. You, too, may be the first in your family to lead the way to eternal life on the path of sacred covenants (which bring both promises and challenging duties). Keeping our second estate means making covenants, then performing the duties those covenants require of us. It takes faith in Jesus Christ to keep covenants for a lifetime. Parents, take hope: rebellious children (who break or forsake covenants) can return. The Savior desires to bring all of God’s children back home. Consequences (happiness for choosing the right, regret and sorrow for choosing evil) are often delayed for a purpose. The Lord acts in His own time and in His own way. Younger children will remember daily prayer, daily scripture study, and testimony. Take the long view if your children feel the pull of the world and have the clouds of doubt overshadow their faith. We have faith, hope, and charity to guide us and to strengthen them.

← A Short Post on How It Feels to Be a Moderate
GenCon: Saturday Afternoon Session →