The French president Francois Hollande is convening an international conference with the countries around Nigeria on the question how to deal with Boko Haram, Michelle Obama addressed the USA on the plight of the abducted schoolgirls: all through the western world the media react to this incident in North Nigeria. Last Saturday I gave an interview on Boko Haram for the national Dutch radio: the media have ‘discovered’ Boko Haram, and so have international politics. Of course the furor is completely justified, especially when the leader of Boko Haram, Abubakar Shekau, announced that he would sell the girls, either as prostitutes, forced brides or slaves. But, as always, there is a history to this, and maybe a moral. So I want to raise two questions here: how could this happen – the history of this brutal violence – and why do we react as we do at this very junction of time? And maybe a third question: how do we deal with this most vicious aspect of ‘the world’? 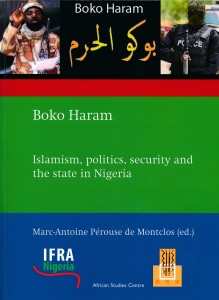 History first, very short, with my own involvement. As an anthropologist I have been researching the Kapsiki/Higi for over four decades now; the group I study is called Higi in Nigeria and Kapsiki in Cameroon, and lives in the Mandara Mountains 300 km. south of Lake Tchad, at both sides of the border between the two countries. I have a village house on the Cameroonian side just 500 meters from the border. Last time we were there, in 2012, my wife and I were advised not to walk into the Nigerian part, as we are wont to do, as elections were due, and Boko Haram was expanding. Since then we could not return as people were being abducted for ransom. When a French priest was abducted from his parish, just an hour drive away, all embassies advised their resident expats to leave North Cameroon.

Boko Haram did not spring from nothing; the area has seen a long series of uprisings and rebellions. The most important one was the Fulani jihad emanating from Sokoto (Northwest Nigeria) in 1804. Its instigator, Usman dan Fodio, was part of a large chain of Fulani-driven Moslem reform movements, starting in the 14th century in Futa Jalon (now in Guinea Conakry). The Fulani are a huge group of cattle nomads living all through the West African savannah and Sahel, interacting closely with the various settled groups of agriculturalists, such as ‘my’ Kapsiki/Higi. Their revolt was not against these settled groups, who had their own religions (called ‘Kirdi’ – pagan – by the Fulani), but against other Moslem polities that they considered slack in their religious observance. In Nigeria these were the city-states of the Hausa (the dominant group in North Nigeria). Usman dan Fodio was an Islamic scholar who then carved out a huge Fulani polity, called the Caliphate, throughout a huge area, with the Mandara Mountains as its eastern border. The British subdued it at the end of the 19th century. 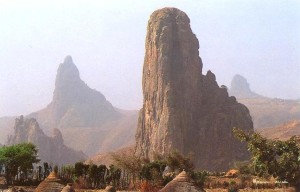 Colonial pacification of the area came late and never really succeeded; slave raiding by Moslems was rampant till the 1920’s, internal skirmishes lasted even longer. In 1972 I witnessed one Kapsiki village hitting upon its neighbor in order to take some ‘forced brides’, an initiative not appreciated by the Cameroonian government. But also the Moslem dream of a Caliphate never died in Nigeria. The British had to cope with Mahdist insurrections, and after independence in 1960 things did not go better. The Biafra war from 1967-1970 was triggered by oil in the South, but was fought out between the Hausa-Fulani North and the Igbo-Yoruba South, costing a million lives. The tension between the Moslem North and Christian South has never disappeared, but, one has to stress, is not primarily religious; most so-called religious wars do have an economic-political ground, but are fought out through religious slogans, a stronger rallying cry.

Triggered also by international developments, Islamization continued in North Nigeria, where at present 12 states (Nigeria is a federation) define themselves as sharia-states. From 1970-1990 a series of reformers appeared on the scene, Maitatsine, Shabaab, Lawal and the founder of Boko Haram: Mohammed Yusuf. The word boko in Hausa indicates a fraud, a sham, anything not ‘genuine’, i.e. not Moslem, and with the association of ‘book’ in English is translated as ‘western education’; haram is ‘forbidden’. All movements were primarily anti-government, i.e. the Nigerian government, even when it was Moslem-headed, and all were violent, though in varying degrees. Yusuf started out as a scholar of the Quran, though quite a maverick, and quickly gathered adepts. His message was a one against modernity, ranging from the notion (‘heresy’) of a round earth and Darwinism, to the erring ideas of vaccinations and the provenance of rain from evaporated water. He was an embarrassment to established Islam, and by his violence caught the attention of the Nigerian government. In 2009 a severe clash ensued in which the Nigerian army killed a great number of Boko Haram followers, including Yusuf.

Instead of calming, this ‘victory’ acerbated the issue, also because of the brutal acts of the army soldiers, who killed indiscriminately, and pillaged and raped almost at will. This convinced local people, mainly Fulani and Hausa, that the army was worse than Boko Haram, and many of their disgruntled youngsters flocked to the movement. After all, Boko Haram was a movement of their own people, and the Nigerian army is manned by strangers: the devil you know … A new leader emerged, Abubakar Shekau, and ever since violence spiraled upwards: killings, abductions (which are forbidden in Islam), set battles against government troops, and forages into Cameroon; the sphere of operations increased and now comprise the whole North, even attacks at Abuja, the official capital.

A traditional house in the Mandara Mountains is built like a small fortress, for good reasons

And now the movement has made the international spotlights through the abduction of some 200 schoolgirls. In fact, it has killed many more than that in the past years, wiping out a whole village (actually quite close to where I – try to – live), yet this is what caught the imagination. Of course, kidnaping is a vile crime, but so is murder. But while we can imagine killing someone, using the threat of death to extract money puts someone beyond understanding or compassion, and if it concerns schoolgirls the perpetrator is for us beyond humanity. The fact that the girls probably are still alive, and that we can ‘do something’ about them, that they are ‘rescuable’, is a wake-up call. Also in international politics our ‘guts’ seem quite important. There is nothing wrong with reacting on this abduction, but it is a little late: we are on a too-long fuse, in international politics. I think that Shekau has overplayed his hand with this abduction; he did switch from ‘selling the girls’ to ‘exchange them for prisoners’, but that is too late, he is in the spotlight. The latest news is that the Nigerian government is open for negotiations.

There are characteristic differences in reactions at both sides of the Atlantic: the Americans want to ‘do something’ and the Europeans want to talk. A combination is needed of course, but any action has to be coordinated and directed both at the immediate issue – the girls – and at the root causes of the conflicts: the state of the Nigerian state and the internal Islamic discourse on violence and faith. If any Western involvement in Nigeria will help the Nigerian state to shape up against corruption, internal violence, accountability and equity in wealth distribution (Nigeria is oil rich) then a ‘save the girls’ movement can be very productive, especially if joined by the Moslem world in trying to find a barrier against violence inside their own religious discourse. If not, then it will be ‘PR politics’, at both sides of the ocean.
From a Christian perspective as LDS I feel we have an obligation to get at the bottom of problems, to seek beyond the evident evils of the world in a quest for the roots of the evils that beset us and our fellow men. Condemning the ‘world’ is easy, but does not solve anything, and African troubles are our own as well, just as Moslem problems are very much ours. There is only one world in which we all live and we better take better care of each other. 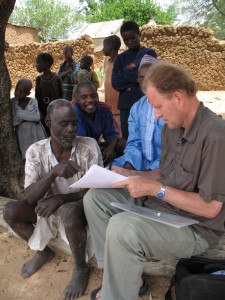 The author in quieter times