The Gospel Doctrine class gives quite some attention to one of the strangest stories in the Old Testament, the one of the prophet Bileam, or Balaam; I just taught it in our ward in the Netherlands. The story is strange in many ways, and with a personage that is surrounded by miracles one easily assumes that he is fictive to start with. But he really existed and as an important prophet! When studying anthropology at Utrecht University, during the archeology course the professor told us about his visit to Deir ‘Alla, a site on the East Bank of the Jordan river. A team of Dutch archeologists from Leiden University led by Hoftijzer and van der Kooy had found there a bronze age shrine, and lo and behold, they found a text on the wall of that shrine, in itself a rare event. But there was more to that text, it even spoke of BLM BN BR, which the scholars recognized from the book of Numbers, Balaam Ben Beor, the prophet that blessed Israel. That was more than a surprise, it was a small earthquake. The very morning after the find, a scholar from Jerusalem University showed up at the site, as any text find is of supreme importance, let alone one mentioning a biblical name. When, eventually, the text fragments were integrated and translated, they related about the prophet Balaam, who received messages about oncoming doom from the Gods. The text starts with:
The misfortunes of the Book of Balaam, son of Beor. A divine seer was he
The gods came to him at night.
And he beheld a vision in accordance with El’s utterance.
They said to Balaam, son of Beor:
“So will it be done, with naught surviving.
No one has seen [the likes of] what you have heard!”
[for the whole text consult Wiki on Balaam]
The text mentions other gods than El (the singular of Elohim), i.a. the Shaddai gods; El Shaddai is used in the Torah as ‘The Almighty’. The shrine dates from the end of the bronze age, the text from between 840-760 BC, and is in a West Semitic language, in between Ugaritic and Aramaic. This major find of a very old text is important for our understanding of the Old Testament, also – and maybe especially – for us as Latter-day Saints. 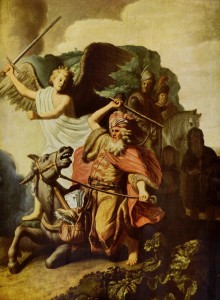 Bileam, the donkey and the Angel by Rembrandt van Rijn, 1622

What we as bible readers, LDS or other, seldom realize is how few biblical names are found by archeology. The relation between scripture and archeology is never simple, and usually very indirect: what we find are traces of foundations, some household objects and heaps of shards, the eternal archeological object. Text is rare, always. From the hundreds of Old Testament names, less than a handful are found, the most important being a roll seal with the name of the house of DVD, David. And from the host of names in the scripture, none other than the very prophet who does not belong to Israel, suddenly shows up, and then a prophet who was rebuked by a donkey, a female ass, easily the weirdest story of the OT.
The Gospel Doctrine manual interprets the astounding story as a warning how a prophet my fall, which is as good a lesson as anyone may draw from the story. But there is much more to it, especially viewing the very historicity of Balaam, a fact not mentioned in the manual. And as a Dutch anthropologist I want to highlight this fact, of course.
First the story itself: at a crucial moment at the end of its desert travels Israel faces a major enemy, a coalition of kings who seek supernatural help through a prophet of great renown. Balaam, being a prophet who really converses with the Lord, instead of cursing the enemy, blesses Israel. In the religion of Israel a blessing is not just hopeful words spoken upon someone’s head, but a statement of identity: this people is a blessed one, so verbal blessings have to be poured out. Balaam ascertains with the Lord that this is the case, and then formulates inspired and prophetic blessings, in a highly poetic language that ties in with the blessings given by Jacob at the end of his life he ends with curses on Moab, his employer-king, not exactly his job description. 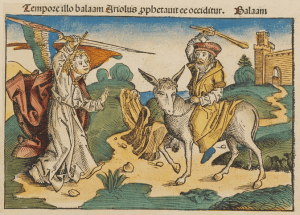 This is the first layer of meaning: Israel is blessed. The second is that Balak, king of Moab looks pretty ridiculous. By showing Israel from ever higher and closer mountaintops, investing a herd of cattle and a flock of sheep in ever mounting sacrificial pyres, he in fact accomplished the opposite: Israel’s blessings accumulate, culminating in the famous ‘star of Jacob’ formula, which will reverberate all the way to the New Testament. So, this second layer of meaning is on futile foreign kings, a satire on Balak himself. Of all the lame comments, Balak’s reaction to Balaam’s performance is the lamest of all: no salary! After thoroughly cursing his employer, Balaam even gets home safely…
The third layer is the wonderful donkey-story. Of course, this has nothing to do with history, with what-actually-happened; on the contrary, the story of the speaking she-ass is told this way because everyone knows that asses do not speak (at least not the animal kind). Here the she-ass sees what the seer fails to see, an angel, which is exactly his line of work as a seer. Who is the real prophet/seer here, the female animal or the male prophet? This engaging pastiche is a satire on Balaam himself; the first one on Balak was funny, this one is hilarious. This is not historical, it is hysterical!
Scholars have pointed out that this second satire might well be a later intrusion into the first story, which does explain the numerous internal contradictions of the story. The Balaam text is a J (Jahwist) text, but the donkey-story seems to stem from a P (Priestly) source. At the end of the book of Numbers, Balaam is summarily executed for an anti-Israel advice to Midian, a story which does not rhyme at all with the main one, and is probably an intrusion from a E (Elohim) source. [Yes, this is the Documentary Hypothesis, but trying to really understand the Torah without it, is like a geologist trying to explain volcanism without referring to tectonic plates]. 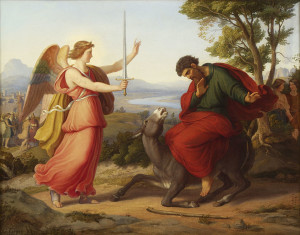 The angel in a more Majestic pose: Gustav Jaeger

Why all these layers on a seer who was not even of Israel? Here the Dutch find is crucial, I think. The shrine of Balaam in Deir ‘Alla shows that at the end of the bronze age a cult featuring Balaam as a central prophet was present in the area, probably widespread (the name Balaam seems to stem from Mesopotamia). This prophet communicated with the same God as Israel, which implied both a support and a threat for the incoming group: what to make of him? In short, the very existence of Balaam presented a serious challenge for Israel in its self-definition as God’s chosen people. Two strands of thinking emerged in the different biblical source traditions: one positively embracing the fact that God had more prophets than just among the sons of Jacob, like Melchizedek and Jethro, all inside the J tradition, later repeated in Micah 6:5; this is the open minded reaction, leading to wonderful blessing texts which were edited to fit into earlier texts. The other reaction were the P and D ones (see e.g. Deuteronomy 23: 5,6, Joshua 24: 9, Nehemiah 13: 2) where Balaam became the villain, the false prophet, who was dutifully executed. This is the reaction of the purists, who would never tolerate any real revelation outside Jacob’s descendants.
In the final editing of the Torah, during and after Exile, these two strands had to be brought together in the main story, and thus emerged an involuted, incredible but intensely funny tale, centering on someone real-who-was-a-challenge, satirizing not only the foreign king, but also the prophet, in the end highlighting the blessed state of the unified Israel.

A final Mormon reflection. Balaam is the story about an embarrassing prophet, and as Mormons we know something about that. This was the way Joseph Smith was viewed by the mainline churches in his day: someone speaking for the Lord without the proper credentials, not from their own ranks, so how to react to such a preposterous claim? The reactions against Balaam are seen in our history as well: to accept him as a prophet – the believers’ option who realized that the heavens were not closed, as in the case of Balaam – , or to renounce him as a false prophet, killing him summarily in the end. In between is the third way which the donkey story exemplifies, ridiculing him, and the American way at that time was through tarring and feathering, a major image still today. Ridicule is a very human reaction when an embarrassing reality forces people to make awkward choices, so let us take heart in Balaam and honor him as an inspiration. 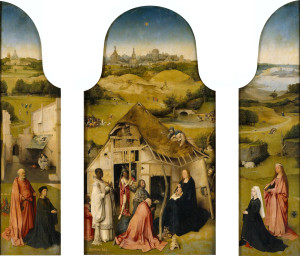 In the famous triptych of the Adoration of the Magi Bileam stands in the dooropening behind the third of the Magi, handing him the crown. Museum Prado, Madrid

← Church Discipline: A Comparison
A Brief Note on History, Angels, and Such →

8 comments for “Reading Bileam: an embarrassing prophet and us”