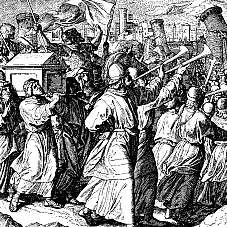 When reading the Old Testament, the essential thing to keep in mind is not This is what happened but This is what someone thought was important for later readers to remember. The text doesn’t give us access to events in the past, or even to the meaning that some person found in past events, but to a variety of texts that many record keepers felt were important for subsequent generations. Events unfold without our aid, and people will find meaning in events without conscious effort because that is what human brains do, but committing a text to written form is an extremely unusual activity that requires highly specialized skills, considerable labor, and access to expensive materials, and so it is first of all the repeated acts of text-making and copying that require explanation.

Looking at the Old Testament as primarily about memory rather than about past events also makes it a less alien place, and our time spent with it more productive. When we read the Old Testament as history, we end up arguing about divergences between the biblical account and archeology, or agonizing over how the Lord could have permitted—or commanded—some outrage or another. If we treat the Old Testament as a memorial text, however, then we can approach it with two questions: Why am I supposed to remember this passage? and Is this passage something to be remembered, or an aid to remembering something else? It’s not difficult to see the memorial function of rules regarding festivals or the conduct of everyday life. One doesn’t remember phylacteries, one uses them to remember the Word of God; one keeps the Passover not for the sake of itself, but as an aid in remembering God’s relationship to Israel.

We might make a comparison with the Old Testament’s treatment of laws. As Marc Brettler points out in How to Read the Bible, the legal compilations of Exodus through Deuteronomy are not legal codes. They are not comprehensive enough for the use of a professional judge or lawyer, as they omit any mention of some of the most important legal issues of the times even as they extensively treat some issues that were relatively uncommon (it turns out that oxen don’t actually gore people all that much). According to Brettler, some of the legal sections are practical while others are theoretical, intended to teach some important principle, even if it’s not always clear which sections belong to which category.

I think we can approach biblical narrative in the same way. Some of the stories are things that should be remembered on their own, while others embody important principles that were considered worthy of memory. As a history, we want a text to provide unvarnished fact and insights into the mentalities and interior motivations of the primary actors—exactly what we don’t have in the Bible. As an aid to memory, however, we want what the Bible frequently does provide: drastic action and vivid example. On Sunday, I will teach the plundering and destruction of Jericho and the annihilation of its people as an example of what can be accomplished by faith, because that is how our interpretive tradition treats it, and because, I suspect, the destruction of Jericho serves more as an aid for the memory of some other principle rather than as an end in itself. The power of faith might not be the only thing the text is concerned with, and I hope the class discussion will bring up some other possibilities, but since the biblical text uses something as drastic as the annihilation of a city to emphasize its point, I think it’s important to try to figure out what that point might be. In this case, it’s actually helpful that Jericho seems not to have been populated or had city walls to speak of during the relevant historical period, as that helps us not to mistake learning from the biblical text with studying historical events.

One might object that there is nothing to be learned from the extermination of even a textual city, that the only legitimate response for a modern reader is to condemn Joshua and his unjustifiable act, but this seems to be incorrect. Take, for example, World War Z, a pretty good book about the zombie apocalypse. The book contains some clever social commentary (most of which the otherwise decent action movie of the same name gets completely wrong) about how what destroys America is not hordes of the undead, but our overgrown cult of celebrity, overreliance on military spectacle, blind faith in consumer technology mediated by profit-driven corporations, and desperate love for the superficial; what saves America in the end are the virtues of diligence, accountability, community effort, and honest labor. As culturally-informed and careful modern readers, we’re prepared to take note of these ideas even as the text emphasizes them by having half the citizens of the country trying to mindlessly devour the other half, who resist that fate by methodically shooting or lopping off the heads of their neighbors. The book is very much trying to tell us something, but not about zombies. The resulting book is gruesome but, at least for some readers, quite memorable, and it suggests that many modern readers are in fact quite prepared to find moral teachings in drastic narratives.

So I will not deplore Joshua or his actions at Jericho because to do so would be to read the Bible with the same literal mindedness as a young earth creationist, and to mistake the book of Judges for something else besides scripture. Many generations of people decided the account of Jericho’s destruction was worth remembering, probably not in itself but rather as an example of some other important principle, and I would fail the text if I don’t attempt to figure out what that principle is. Reading the Bible requires us to grapple with the difficult texts, not erase them, or get short-circuited by condemning the stories or characters we’re supposed to be learning from.