I love the Old Testament, both as an anthropologist and as a Mormon. None of our other Standard Works has as many wonderful stories as the OT, and none raises as many questions as this longest and most complex of all Scriptures. Now that we plough our way through it in Sunday School, we noticed how hard these stories are, and even harder are the parts we skip. That has everything to do with the purpose of these tales, what I call their ‘voices’. Jonathan Green correctly reminded us in his blog that the ‘Why told’ question is more interesting than ‘What happened’. Pursuing this angle, I think we as Mormons could have a privileged understanding of the Scriptures, also of the Old Testament. The simple reason is that we have been and still are witness to the genesis of scripture, as one of the few denominations in Christendom. Our last instance was in 1978, for most of us still in living memory, but the coming about of the D&C is well recorded. Take for instance the Word of Wisdom: we know what it says, but we also know the circumstances that led to this revelation, and we recognize the 19th century in some of its details. Plus we know how this gentle advice became a binding rule. If we apply this insight that a revelation speaks with several voices to other Scriptures, we gain a lot of understanding. So let us listen to the three voices of the Old Testament. 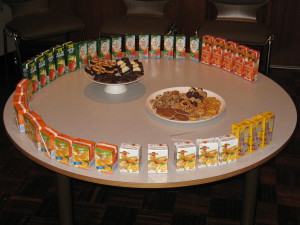 A quite Mormon snack table

The first voice is the message inside the story itself, the morals to the story: God’s actions with His people, something clear, sometimes highly questionable, most often puzzling. Why did Jericho have to be destroyed, why is an ‘independent woman’ saved? Why are the Amalekites not allowed to exist? Why could Moses not enter the promised land? (NB: there are two contradicting answers to the last one). The second voice is what we do with it, and that is amply borne out in the lesson manual: “What does it mean for us?’ Sometimes we think that these scriptures are written for us, but that is only the case with D&C (and that is over 1½ century ago as well), definitely not with the Bible.
What we miss and what I want to focus on here is the third voice, that of the authors and the editors, the ones who wrote the texts and composed the OT. The traditional idea that Moses wrote the first five books, the Pentateuch, is no longer tenable. Bible studies, done by faithful and diligent scholars, have borne that out, and my point here is that their viewpoint offers a window on puzzling stories that make them much more intelligible and meaningful; if we can put ourselves in the author’s shoes, the Scriptures speak with a clear voice. This third voice helps us to understand very old texts situated in a distant land, way in the past; and the ‘past is a foreign country’ anyway. 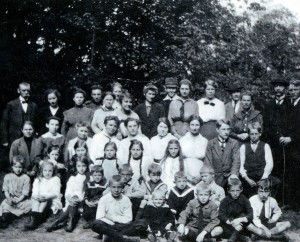 Group photo’s are our present tool for identity: the Utrecht ward (Netherlands) in 1917

The OT text is the result of many authors; just the Pentateuch originates between the 9th and the 5th century BC from at least four oral and scriptural traditions (the famous E, J, D and P designated by the Documentary Hypothesis). These authors all had their own agendas, religious and political, and once these are clear, their texts become much more understandable. The crucial era for the composition of most of the OT is the Babylonian Exile, 597-538 BC, after the razing of the First Temple (the one of Salomo) by the conquerors. This is the time the OT was composed, from texts inherited from either of the two Kingdoms, Israel in the North and Judah in the South, with new texts of exile, and new prophets. They had to cling to their religion because they had lost all else, and thus they collected and edited traditions into Scripture. For them, these Scriptures were the mainstay of their identity as covenant people, and as their successors we have to thank them for their inspired and intelligent work. So the first question one has to ask is: ‘What does this story mean for the people in Exile? What comfort could they derive from it? What message does it have for them?’ That is the third voice. Having lost everything, they had to explain why the Lord seemingly had forsaken them, how they would ever regain their land, and how they could retain their own identity in exile. When back in Jerusalem after 538 BC they continued this task. 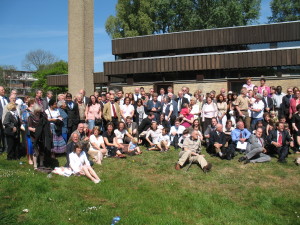 A reunion of the Utrecht ward in 2007: history is our spring board for the future

I started out with the Word of Wisdom as an example of an embedded recent revelation, so I now take its OT parallel, Leviticus. This is the book most skipped in Sunday School, boring as we tend to find it with its many rules and detailed ritual prescriptions. But crucial as the WoW is for us, Leviticus was essential for the people in exile. It taught them what a proper Israelite was, by defining kosher food as a charter for self-definition. The food taboos of Leviticus, when read this way, give us an exact definition of a faithful son and daughter of Jacob: someone who kept to his own flock, ate food that the Lord had declared pure, and who belonged to a holy nation dedicated to YHWH. People are what they eat, so food is an apt instrument for group definition. Some of the food taboos might be simply a healthy advice, the main message is to underline the covenant, in a situation where losing oneself in the majority culture is much easier. (This is anthropological analysis of Leviticus was done by Mary Douglas, a famous British anthropologist.) In this way, the food proscriptions fit in well with the legal part of Leviticus, which indeed is very incomplete as law, but quite effective as reinforcement of what it is to be a Jew in Babylon: it stipulates just the differences with the much more elaborate law codes over there. Finally, the long pieces on the tabernacle are crucial as well: they described in great detail the ark and the tabernacle, not because they had to build them, but they had lost them, after the destruction of the temple. They had to make a holy shrine in words, and that is what they did. Leviticus is a beautiful book when read this way: how to be a faithful son and daughter of Jacob. 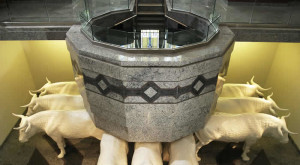 Our main link with the First Temple: the oxen

They had their rules, we have ours. Our own modest revelation of D&C 89 renders Leviticus understandable: the problem of Emma who had to wash all those spittoons in a smoke filled house, may seem rather mundane as a trigger and nowhere near as dramatic as the Exile, but out came a self-definition which still serves us well.

11 comments for “The three voices of the Scriptures”