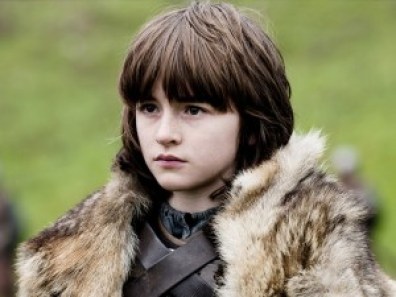 Since Nathaniel mentioned Game of Thrones and why he doesn’t watch it in his wonderful post earlier this week, I thought I’d give you a few lines on why I do watch the series.

Much ink has been spilled over the gratuitous sex and violence in Game of Thrones. I’ll admit that I roll my eyes over the fact that every conversation that can possibly take place whilst the person speaking (or at least someone else in the room) is having sex, does. Still, I think what tends to bother people even more is the sense that there are no boundaries to the terrible things that can happen in Game of Thrones.

There is indeed a nightmarish quality to the experience of watching the series. The arbitrariness, the dawning realization that something awful will happen to your favorite character, if not in this episode, then in the next, is uncomfortable and unnerving. Who wants to allow this perverse story world of rape and senseless violence to inform his or her real worldview? However much we might dream of dragons or daring quests, the Seven Kingdoms as brought to us in stark and opulent detail by HBO are not a world we are remotely accustomed to or comfortable with inhabiting.

It can all seem quite distant from our ordinary first world lives, where safety is the norm, the Rule of Law obtains, and most of the ghastly things that happen in Game of Thrones are thankfully remote, if not unheard of in real life. Unfortunately the disturbing events and personalities in of Game of Thrones form a real and inescapable part of the world we do inhabit.

In our world too there are ruthless, scheming pimps like Littlefinger. There are 13-year-olds forced into marriage like Sansa and Daenerys. There are children crippled and driven from their homes like Bran. There are powerful mafia, gang, or terrorist families like the Lannisters, and innocents caught within the crossfire. There are children like Arya, surrounded by killing and brutality, and forced to grow up much too fast. There are rapes and burning villages and children left orphaned. There are no dragons, but there are drones raining fire from the sky. This is not the stuff of long ago.  It is happening today, if not in your backyard, then somewhere in the world. In many places, all over the world.

When I watch Game of Thrones, it doesn’t desensitize me. It sensitizes me. It reminds me that this sense of wrongness in the world, this terrible feeling that anything awful could happen, and nothing is safe, is how so many of my brothers and sisters are living right now. They don’t necessarily live in castles, or speak cultured British English, but the essentials of human greed and suffering are the same.

I watch Game of Thrones because Arya and Bran Stark remind me terribly, hauntingly of my own two children, who are just their age and so much like them. In some emotional, literary sense, Bran and Arya are my children. I care what happens to them. It squeezes my heart to watch them suffer, to wait endlessly, futilely, for the happy ending that never comes. And with startling vividness I realize that had they been born in Syria or Nigeria, my own children might be living lives like Bran and Arya.

Game of Thrones portrays the randomness and horror of violence, and its real and devastating impact on the most vulnerable, and the most innocent. In that way, it fills a void in our traditional fairy tale entertainment, where things make sense, where innocence and goodness are rewarded, and the bad guys always get it in the end. It is a sobering, stark reminder to open our eyes and see what is occurring outside our comfortable suburban existence. There are dark things happening on our planet, and the innocents are always the ones who suffer. Those children in Nigeria and Syria should be as real and relatable to us as Bran and Arya Stark. Game of Thrones brings what is happening to them into vivid, startling relief, and puts it inescapably before our eyes. Maybe watching it can help us picture what it would be like if those terrible things were happening to us and ours. Maybe it can remind us that those faraway people to whom they are happening now are ours–our brothers and sisters, our responsibility.

34 comments for “Why I Watch Game of Thrones”