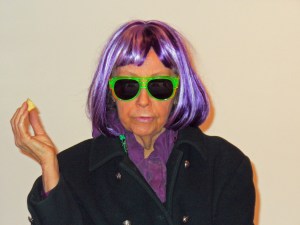 Isabelle Collin Dufresne, known as Ultra Violet, died this morning after a battle with cancer. She was 78.

Dufresne was perhaps the most famous Mormon artist that most Mormons haven’t heard of. But at the height of the Pop Art movement and Andy Warhol’s Factory, Ultra Violet was well known in the New York art scene, and she is still well remembered for her memoir of that time, Famous For 15 Minutes: My Years with Andy Warhol

Born in France in 1935, she met Salvador Dalí in 1954, becoming his muse and student. Then in the early 1960s Dufresne became interested in the Pop Art movement, and after Dalí introduced her to Andy Warhol in 1963, she became one of the participants in Warhol’s unorthodox studio, The Factory, and acted in more than a dozen films between 1965 and 1974. In 1969 she was replaced as Warhol’s primary “muse” and by the 1980s she left Warhol’s group.

After a 1973 near-death experience, Dufresne began a spiritual quest that eventually led to joining the LDS Church in 1981. She has been a participant in the New York City-based Mormon Artists Group in recent years, and has been well known among many members in her stake.

She is the author of three books and appeared in 19 films, including a small part in the academy award winning film Midnight Cowboy (1969).