When the Lord wants to ‘refresh’ the gospel, He brings forth a book, it seems. The Restoration was triggered with the Book of Mormon, for the Reformation the first printing of the bible in German was indispensable and Christianity became something else than a Jewish sect the moment Paul’s letters and the early gospels came together as the core of what later would become the New Testament. We as LDS are a Religion of the Books, and that plural irks our fellow Christians to no end: it should be one Book. However, if they would read their own Book well, i.c. the Old Testament, listening to its ‘third voice’ – what it meant to the people for whom the book was produced, focusing on the authors – they would recognize that the appearance of a new book inside a scriptural tradition is not new at all. On the contrary, it is very old, as it is the way the Lord appears to work. We read about it in our Sunday School class, but there the gist of the story is muted. 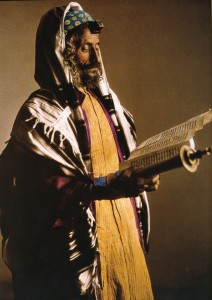 A man in Yemen reading his Thora

The year is about 622 BC, the city is Jerusalem, and the hero of the tale is Josiah, king of Judah. The small kingdom is in dire straits; its larger brother-state Israel has been demolished in 720 BC by the Assyrians, and the young king has managed to keep the mini-kingdom afloat by turning away the Assyrians with great difficulty (and God’s help, see 2 Kings 19: 35,36), also because the Assyrian empire was weakened. As an eight year old boy he had succeeded his father Amon, who continued the pagan rituals reintroduced by his father Manasseh. Actually, Josiah’s father was murdered by his servants, but the people killed the conspirators and installed him, in 641 BC (2 Chron. 33: 24,25).

When Josiah was 26 the texts in Kings and Chronicles state that he decided to refurbish the temple, and do away with the Asherah poles in the complex. He financed it with the accumulated revenues of the temple, the silver. The story in 2 Kings 22 is rather neat: the silver was handed to the builders and artisans, without any need for accounting, because these people were thoroughly reliable, 22:7. (Builders’ mores seem to have plummeted since then …). Then something important happened. High Priest Hilkia and the court scribe returned with a book roll they found during the refurbishing in the treasure chest, and read it aloud to the king, a document purported to be an account of Moses’ farewell sermon to Israel. The king listened attentively, tore up his clothes, asked for a prophetic confirmation, and then ordered the men to gather the people and read the ‘Book of the Law’, as it was called, to them. This was the start of a mass conversion, with at long last the celebration of a proper Pesach (Chron. 35), followed by a ruthless purification of all Judah and Samaria, spelled out in great detail. 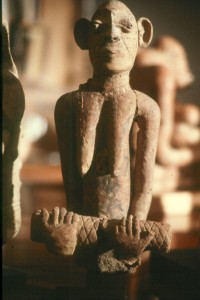 This Josiah Reformation, as it is known, was to be short lived, however. When in 609 BC pharaoh Necho II set out to help Assyria against the rising power of Babylon, Josiah rode out to thwart the Egyptian plans. It proved not to be a wise plan. He tried to block the way of the Egyptians at Megiddo, but was killed. Why he did this is unclear, and 2 Chron. 35 gives an interesting ‘quote’ by the pharaoh, indicating that God had spoken to the pharaoh, and attributes Josiah’s death to this disobedience of the king of Judah. Though this particular quote and ‘explanation’ (35:21, 22) are almost surely introduced by a later editor, the passage does mark the end of the Davidic line. After Josiah’s death, his son Jehoachaz reigns three months, to be disposed by the pharaoh in favor of his brother Jehoiakim, whose follower Jehoiachin or Jeconiah lasted from three months, to be followed by the very last of the Davidic line, Zedekiah, who reigned from 597-587, before being deported blind to Babylon. A sorry end, and Lehi had ample reason to leave the area around this time.

So much is well known. But now two really important questions arise: what book was found in the temple treasury, and was it a chance discovery? In all probability this ‘Book of the Law’ was Deuteronomy, the book we know as the fifth one of the Pentateuch. The text itself contains a host of signals that it is not written by Moses himself, but that was already clear for the other four books as well. There is a surprising consensus among scholars of all persuasion that the book roll contained the core of the present Deuteronomy text, i.e. chapters 5-26. The core is, as always, the covenant between Yahweh and Israel, and the kingdom of Judah had to heed to covenant or else …, meaning the destruction by the enemy, Assyria at that time, later to be executed by Babylon. So the book in all probability was written at that time, or shortly before. By whom? As always, ancient authors do not mention their name, but several names have been suggested. The story relates that the roll was put before the esteemed prophetess Huldah for authentication: was it real? She attested to its veracity and added a prophecy on her own, telling them that the Lord would pour out his wrath because Jerusalem had not heeded the covenant. (See 2 Kings 16-20 for this impressive prophecy.)

Yet, a woman prophet? Not very common – though not unknown by any means. Why did Josiah choose her? After all, there were two other prophets of eminent stature in the city at that time: Zephaniah and Jeremiah. There are two options. One thesis is that either of them – or both – might well be the author of the book, and that therefore Huldah had to be the consulting prophet. She was of high descent within the priestly line and fully conversant, it seems, with the court, and quite revered (one gate of Jerusalem was named after her, see photo). A role model for ‘women-and-priesthood no doubt, but choosing her made excellent sense if the male prophets wrote the book. Detailed comparison of the wording of Deut. 5-26 makes a 7th century origin plausible, but gives insufficient clues to any specific author. So he is called the Deuteronomist, and he might not be a single author. Parts of the ‘Book of the Law’ might be older, but the introduction to the law code (4-11) was added after the discovery; chapter 1-4 were added still later as a historic introduction. 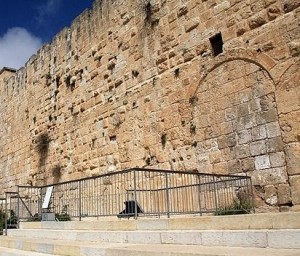 The Hulda gates in Jerusalem. The closure of the gate might be read as symbolic…[/caption]

For the other option the second question comes in: Was it a chance find? Not very likely: Josiah directed the people straight towards the treasury where the scroll was, and tore up his clothes immediately after the first reading, even before consulting the esteemed Huldah for authentication. Without speculating too much, one might pose that in Jerusalem, with its three established prophets close to the court, the project of book writing was known by both the king and the prophets, and that the whole endeavor was part of a major restoration movement, in which religion and politics worked hand in hand. The book is a work of great intellectual and inspirational value, and must have cost a lot of time in planning and writing. This notion of prophetic-kingly cooperation allows for the second thesis, that Huldah was not consulted by chance, but that is was she herself who wrote the book; her inspired words may well be the ones we now read as the fifth so-called ‘Book of Moses’: a woman-writer of Scripture, great idea! Whoever actually wrote the book may never be established and in fact is not that important, but the legacy is crucial, Deuteronomy, plus what is called ‘Deuronomist History’. The latter gives a clear preference for Judah over the Northern Kingdom, a theme that has colored the books of Kings.

In all probability, the reform of Josiah probably not only had religious reasons but also political and economic ones. Through his reform he forcefully centered all worship on Jerusalem, his capital, eliminating with brute force all competing temples and shrines, even inside the remnants of the Northern Kingdom. Whatever his additional motives, this exclusive focus on the Jerusalem temple would remain a lasting heritage, and henceforth the Jews would remain focused on one holy place only, one temple. But also the theology of Deuteronomy is a lasting one, as it pervades much of what we have read so far in the Old Testament, such as for instance the whole Book of Judges. It is one major theological strain throughout the Hebrew Bible. In fact it forms a prelude to the Axial Age, the time of global religious renewal (more about that in a later blog). The message centers, stronger than ever, on the covenant between Yahweh and His people. Israel should be a theocracy with the Lord at its head and all of Israel has to be a priestly nation, with a system of laws that would reign sovereign over all humans, kings, priests and prophets. More than anything else this characterizes Mormon theology between the other ‘Christianities’. The book highlights the task of the prophets at upholding the law, in its protection of the weak and vulnerable. These are, in principle, the tenets later to be systematized during the Exile. Judah was not in exile yet, but led a harrowed existence after the demise of Ephraim. Situated more or less on the highway between Egypt and Assyria, it was ‘between the hammer and the anvil’, as the French expression goes, not an easy way to live, but a major incentive to reflect on one’s relationship with God. 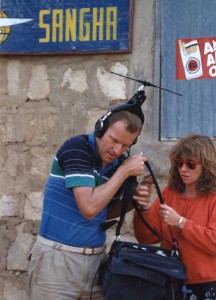 The past is a foreign country. For them our present would be hard to understand: the author disguised as alien.

This provenance of the book solves quite a few riddles in the text of Deuteronomy – such as how Moses would call himself the most humble person ever – but more importantly it shows that a major religious reform may well be accompanied by a book, by a text that suddenly emerges, an inspired text, real Scripture. The Lord works with revelations, either spoken or written, and these latter come in many forms, and often from unexpected corners. Some speak from the dust as we as Mormons are well aware, but this particular one spoke from the silver, a silver that ironically for a considerable part must have been gained by the very Ashera cult that it sought to eliminate. Again, the ‘third voice’, the genesis of the script in its proper historic setting, focusing on the author and his (or her!) direct audience, offers us a privileged angle into a layer of meaning otherwise undetected, and it this case we as Mormons easily relate to this message: God works with Books, with old books as well as new ones. New and plural. (And the prophet writing Scripture might well have been a woman.…)

5 comments for “It always starts with a book”