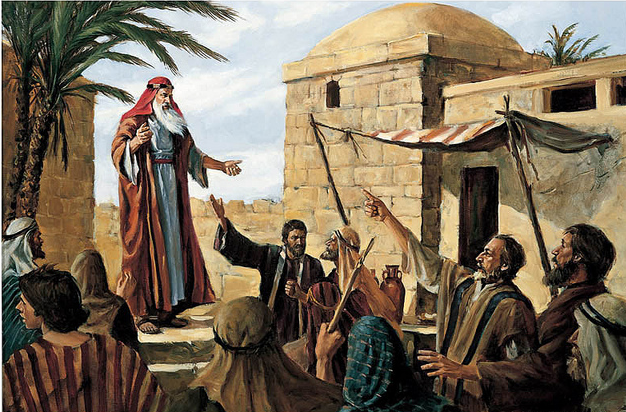 For behold, it came to pass that the Lord spake unto my father, yea, even in a dream, and said unto him: Blessed art thou Lehi, because of the things which thou hast done; and because thou hast been faithful and declared unto this people the things which I commanded thee, behold, they seek to take away thy life (1 Nephi 2:1)

“Behold,” says The Lord, “They seek to take away thy life.” This phrase really stuck out to me. It’s not like the Lord is likely telling Lehi anything that he doesn’t already know, is he? After all, this is how Nephi ended the last chapter:

And when the Jews heard these things they were angry with him; yea, even as with the prophets of old, whom they had cast out, and stoned, and slain; and they also sought his life, that they might take it away. (1 Nephi 1:20)

Then again, Nephi is writing this retrospectively. He wasn’t there (as far as we know) while his father preached to see the crowd’s reaction. Or even if there really was much of a crowd. By the time he writes these words, he has faced the deadly violence of his brothers on more than one occasion, but did either Nephi or Lehi realize that Lehi’s life was in jeopardy at the time of the Lord’s warning? Their neighbors had not cast Lehi out. They had not stoned him. They had not killed him. Lehi walked away. He wasn’t exiled. When Nephi and his brothers came back home, the house hadn’t even been ransacked. This indicates, to me at least, that any plots to take his life hadn’t manifested publicly before they left.

How does that change our whole picture of the Lehi and his family? If, instead of an image of Lehi standing before an angry crowd at the risk of his life, we imagine Lehi devastated by the revelation from the Lord that his friends and neighbors and fellow countrymen hated him so much they wanted to end his life.

And what might Laman and Lemuel have thought of this? Of leaving a town where their father was a bit of an eccentric, yeah, but where the only evidence of his impending murder was a vision in the night? (And this from a man who swoons on a daily basis?)

And what might Nephi have thought, as a young man? Did his parents tell him? I imagine they did, and what must it have done to his perception of the world to suddenly see in the faces of those who lived in his home the visage of assassins?

And what are we to think, ourselves? Nephi speaks of “the tender mercies of the Lord… over all those whom he hath chosen, because of their faith, to make them mighty even unto the power of deliverance,” (1 Nephi 1:20) and we think of stories of angels and smiting, but before these overt displays of the Lord’s power, did Nephi connect his father’s persecution to ancient martyr’s as a leap of faith? Or as youthful melodrama? Or both? What does this say about how we should view ourselves in relation to the scriptures? 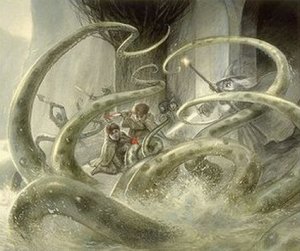 Scripture study is hard for me because the scriptures are so densely teeming with ideas and people and memories and connections and theology and principles and history and glimpses of myself that I can’t get more than a verse into them without–as you see here–being totally swept away. I don’t read as much as I should not because I don’t get anything out of the scriptures, but because every time I dip a toe into the water the scriptures reach out like Tolkien’s Watcher in the Water and drag me under the surface.

I’m not sure what this means. What is this instinct I have to seek connections and meaning, surely sometimes going beyond what any reasonable synthesis of the text would support (especially as I’m ignorant of any particular specialized cultural, historical, or linguistic context)?

In my darker moments I consider that it might be some urge to dominate and master. To understand is to circumscribe. To contain. To capture. To possess. But I don’t think that’s fair to the instincts that drive me. When I am trying to understand I lose myself completely: what day it is, what time it is, what my name is, where I live. I am so completely swept away that it’s hard to imagine I am at somehow acting out of a kind of greedy self-aggrandizement.

In my cynical moments I wonder what on Earth such obsessive fascination with text has to do with pure religion, and undefiled. I certainly don’t think it makes me a better home teacher, and it’s hard to see how the excess can lead me closer to Christ. But I don’t think this is fair either. Getting lost in the web of scriptures might bore others to tears (and perhaps with good reason), but I can’t put it in the same category as meaningless compulsive repetition. (Is the front door locked? Am I sure it’s locked? Did I accidentally unlock it last time I checked it?) There is something fruitful in the toil. A deep love of the ancient prophets, if nothing else, and a feeling of kinship with those who have gone before. I’m not sure that I’m correct in what I guess about their motives, but I am sure that if you spend this much time trying to guess what their motives might be they become real in a way that I don’t think casual reading could ever allow. Not for me, in any case.

I am sure there are problems with my approach to the scriptures. My allotted 15 minutes turned into over an hour the day I wrote this piece, and in that hour I read a grand total of one verse. Just one. And, while the obsession with goal-oriented progression through the scriptures is probably mildly pathological, it seems that any scripture study where I read less than 100 words and then write more than 1,000 might be slightly megalomaniacal. Can this even be called study of scripture?

And yet: I, too, am a child of God. I might be one of His weird, maladjusted offspring, but I’m still there in the family photo. The thing of primary importance isn’t that I exhibit grace or composure in my worship, it’s that I show up and do it. That’s certainly not the only thing (just like “make a joyful noise” isn’t an excuse to never even try to find the melody), but it’s the primary thing.

My children like to play video games with me. My son is 5, my daughter is 7, and we play Halo together: shooting aliens and saving the world. I’ve developed a pretty extensive repertoire of harmless exclamations to use when the action gets exciting. My favorite phrase is “Crimminy Jickets!” I have no idea where I came up with that. (Yes, it’s Jimminy Cricket from Pinnochio… but why!? I’m at a loss.)

So my kids are learning a very weird and mild form of trash talk used on the bad guys on screen, and even by my fairly odd standards the things they say often make absolutely no sense at all. They utter taunts (I wish I could remember one) that I can tell are intended as taunts by the inflection in their voice but which I cannot, for the life of me, interpret as taunting. (Seriously, I’ve probably been killed on screen a couple of times because I’m trying to figure out what on Earth they think they are trying to say.) But I don’t care. It’s not their abilities that matter. It’s their enthusiasm. The raise their voices, they giggle at each other’s inventions, and they’re clearly relishing the time spent together and with me.

And if I can recognize my son’s efforts to be a part of his dad’s life, surely our Father, who knows best of all how to succor His children, can recognize my efforts just as clearly. And that, fundamentally, is what my obsession with textual exegesis is all about. I am not a man of dreams or visions or mighty miracles. So in this mortal world I am like a son who has lost his Father, and all I have left are these old books. I don’t really understand them, but I keep rereading them anyway, just because they were His.