It is time now to ponder, after the silence of bereavement. For me the gospel is sometimes hard to believe, often an intellectual challenge, but always a comforting presence. Things go wrong in this world (well, many things go right as well) but in our day and age the things that do go wrong seem to do that in a grand way. The downing of MZ17 was one of these. What comfort can I find in the scriptures, how does the Old Testament – as that is what we are reading at this time – relate to the afflictions that flesh is heir to? The most inspiring messages and profound notions in the Old Testament are borne out of suffering, out of deep loss and utter despair. When history goes wrong, we, together with the heavens, construct the deepest meaning in our lives. Let us see how.
Reading the Old Testament this way, means that we are using the insights of the First Axial Age in order to give meaning to the Second Axial Age. 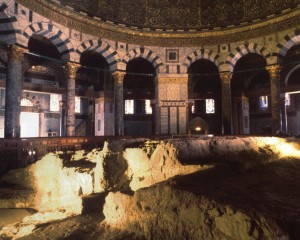 The interior of the Dome of the Rock, place of birth of our three Abrahamic religions

The terms may not be familiar with everyone, but the notion is important, also for us Mormons. In a famous study of 1953, The Origin and Goal of History, philosopher Karl Jaspers noticed that between 800 BC and 300 BC a crucial, silent revolution in religion and ethics took place in areas very distant from each other. In 2005 religious scholar Karen Armstrong took it up with ‘The Great Transition’ and in 2011 sociologist Robert Bellah with a major study. Together they defined core areas where thinking about God and man changed dramatically, leading to the development of the present world religions and of science: Greece, Israel, India and China. These changes came in the same era, seemingly without much contact between them. Greece developed democracy, philosophy and mathematics, in India Gautama Buddha revolutionized religion, and Confucius founded a great religion in China, Confucianism. Everywhere the change was from the local to the universal, from power to ethics, from the rule of might to the rule of law, and from polytheism to monotheism. Our own LDS roots are both in Greece and Israel, and both legacies are for us to cherish and develop, and to use in construct meaning out of a resistant history.

It is inside the Bible that we find the Israeli version of this Transition, as it in fact generated much of the Old Testament. It is clear now that much of the OT was composed, collected and edited during the Babylonian Exile, and the subsequent return to Jerusalem. The profound insights in salvation in the Old Testament stem from that situation of deep despair. History had gone terribly wrong, and they had to construct a new meaning out of the ruins. The reigns of David and Salomo had seemed to vindicate the covenant between Israel and YHWH, with the flourishing of the united kingdom of Israel and Judah, but that held for a very short time only. A century later the realm was deeply divided, and somewhat later the Northern tribes would be taken captive by the Assyrians. Judah, where most of the OT texts stem from, long hovered as a mini-state between the East and Egypt. In the 6th century BC the curtain fell, despite reforms and a series of intervening prophets, and despite the ‘everlasting covenant’. In captivity the priests and prophets had to come to terms with one major question, the one haunting us all after a calamity: ‘Why? What went wrong?’ The answer was varied, but usually pointed to the human side of the covenant, and led to a watershed in religion. 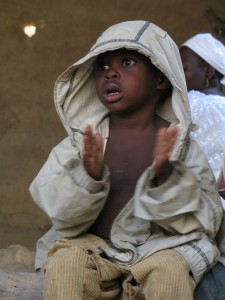 ‘Praise the Lord’. Our Kapsiki ‘grandson’ in church in Mogode, North Cameroon

This clash between supposed destiny and actual history produced in fact the religion that we know as Judaism, and was the very reason for composing the Old Testament. Out came a transformed religion. Before the Exile YHWH was a jealous God, recognizing the existence but disallowing the worship of other gods. Baal and Ashera still were considered as competitors, and one of the main themes running through pre-exilic history is the constant seduction by these other cults; the people of Israel have to be constantly remembered of their covenant. After the Exile this is completely different: the other gods have disappeared, so there is true monotheism; YHWH is merciful now, and there is hardly any more backsliding by the faithful (even if they disagree who are the children of the covenant, see ‘Who is Israel’). Synagogues have come in, the Book is present, and the notion of the Messiah surfaces.
Thus we have the prophecies at the end of Isaiah – the ‘suffering servant’ – Jeremiah, Ezekiel, and indeed much of the Pentateuch. The Axial Age for Israel came through suffering and seeming failure, and produced the Religion of the Book. The same age brought forth a flowering of people honestly seeking God, like the Essenes who wrote the Dead Sea Scrolls; plus, of course the small colony that fled their city of disappointment and went overseas. Also the Book of Mormon stems from that same First Axial Age, breathing the very same spirit of universalism and renewal of covenant. In the end they, too, floundered, but they did leave a book, like their brothers in the old country. The gospel is born in suffering, and matures in coping with despair. Christ’s message of love and forgiveness, and his role as a Redeemer, could not have possible without being grafted on this olive tree. Christianity, as a whole, started out as a public failure – the Crucifixion – to be transformed in universal redemption.
There is a second Axial Age as well, usually defined starting with 18th century Enlightenment through the Industrial Age to the present, and not finished. Not just because of the huge material changes, but for the exchange of ideas, culture and transcendental insights this is aptly called the 2nd Axial Age. Enlightenment freed first religion from politics – producing the ideological basis for the USA – and then liberated reason from any other authority, leading to revolutions in science and technology. Our world is transforming, not an easier world per se, but definitely a richer one. Again we as LDS are part and parcel of this Transformation; the gospel has extended over the world with a multi-continental focus, from religions based on political entities to a self-organizing religion on a non-territorial basis, with even a cosmic aspect. We are very much an Enlightenment religion, with our ‘rational theology’, our constant discussion between religion and scholarship, the wide definition of the priesthood (though still ongoing, I hope), our enthusiast embrace of technology but also our struggle with secularization.

Also, within the history of the Restoration, a similar dynamic can be seen. The restored gospel was born in turbulent times, and during its uneasy early history was beset with external pressures and internal disputes. The death of Joseph was a period of bereavement and deep grief and brought a fundamental change. The maturation of the restoration came during a self-imposed exile to the intermountain West. During this period the Church did have a very ambivalent relationship with its host country the USA. Our return from exile was the period of adaptation or Americanization of the Church, early 20th century, and out came a different but stronger church. It did not have to move physically back to the USA, as the federation came along anyway. But gone was the notion of gathering as part of early millenarianism, gone was the exclusive focus on the New World, gone was also the polygyny, while gained were the increasing spread over the continents, gained was the realization that the Saints had their place in and contribution to the world, in short gained was the worldwide church. So there we are, a microcosm of both Axial Ages, living in ‘interesting times’. The gospel is born out of grief.
And ‘interesting times’ they surely are. In the end all nations might well be ‘9/11 nations’, suffering for various reasons. But the lessons from the 1st Axial Age is that forgiveness bests revenge, and that though some may be heavier sinners than others, in the end also for our own salvation we fully depend on the Lord. We have to live with evil, we have to fight evil to the best of our abilities, but we never must let our lives be dominated by the evil that we encounter. Our life is worth living, and if anything we have to thank the untimely dead for reminding us of just that, and show our appreciation and love for them by making our lives richer, more meaningful, more saintly. 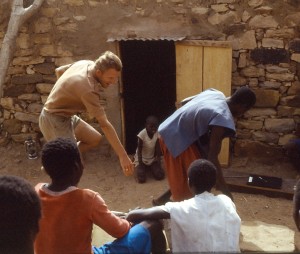 Living life to the full. The author, a little younger, gets dancing lessons in Dogon Mali,

← I was a stranger, and ye took me in
BYUNTC Conference Videos →

3 comments for “A gospel born in grief”