Humor in the Scriptures? Come on! The Gospel is serious matter, isn’t it? Yet, humor is there, sometimes clear, sometimes disguised, but the ‘third voice’—the reading of the text from the viewpoint of the author—can be very funny. We saw Balaam being topped by a she-ass, very amusing, but there is a larger example, more elaborate and veiled, but definitely funny. It is the entire Book of Jonah, the prophet-in-the-fish and the most productive way to read it might well be as a satire. Why?

Let us run through the story: Jonah was called by the Lord to go to preach repentance to the evil city of Nineveh. Immediately he fled to Tarshish, but the Lord called up a storm, and though Jonah kept sleeping, the sailors decided to threw the lots to know the culprit. That was shown to be Jonah, who confessed being a fleeing prophet. So, at his own suggestion they threw him overboard as a sacrifice, and the sea became calm. A big fish gobbled up Jonah, and he stayed three days inside, praying to the Lord. After being vomited on land, Jonah obeyed the Lord and went to Nineveh, preaching destruction on this huge city within 40 days. Immediately the king and whole city repented, fasting and clothing themselves in sackcloth, so the Lord relented and spared the city. That divine mercy angered Jonah to no end, he wished to die as he was ashamed that Nineveh was spared. He waited outside the city to see what happened. The Lord made a miracle plant that gave him shadow, which rejoiced Jonah, but when the morning a worm destroyed the plant Jonah again wished to die. He explained the Lord that he was very angry, but the Lord argued with him that a great city full of people was worth more than a plant.
A strange story but prophets are no strangers to miracles, so why call it a satire, what is ‘wrong’ with it? Actually a lot. First, it is shock full of miracles: calming the sea by sacrifice, three days in a fish, immediate repentance of Assyrians (of all people!), a miracle plant, etc. Then many of the details are ludicrous: the ship ‘thinks it would break’ (this has disappeared in most translations), the city is about 90 km x 90 km (three day’s journey in all directions), housing 120.00 people ‘who cannot discern between their right hand and their left’, and to cap it all, the king decided that also the animals of the city have to repent, fast and put on sackcloth, and they actually did! 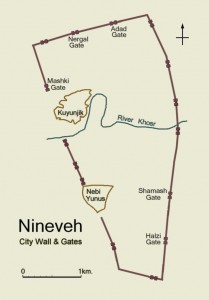 The actual plan of Nineveh, about 15 km2, about 1/150th of the size mentioned in the satire

All this is the very amusing setting for a prophet who does not behave at all like a proper prophet should: he disobeys the Lord, goes West instead of East, remains asleep during the storm, and finally is angry because he so wanted to destroy a major city, but the Lord did not let him do it. A disobedient, mute, quirky and sullen prophet, who in actual fact was more successful than any of his colleagues, as he against his wish converts a world city after the shortest sermon ever, of any prophet, then and now: ‘Yet forty days, and Nineveh shall be overthrown!’, that is all. He builds a shelter, and then sits brooding in the shadow of the plant and wants to die when it disappears. He, in fact, continuously wants to die in the story rather than do what the Lord demands. At the start of the tale, even the gentile sailors are more pious and understand the Lord better than the prophet. Jonah, in short, is the caricature of a prophet.
Like Balaam’s ass-story, this is not historical but hysterical. For the people for whom this story was written, the third voice, the satirical tone must have been evident. That is was not a prophet’s book must have been crystal clear to them, as those are always messages from a prophet, not a story about a prophet (compare Jonah with all other prophetic books in the OT, and the difference is evident). If the book is a satire, then what or who does it satirize? Balaam’s ass satirized a foreign prophet because he was an embarrassment for later writers (probably Deuteronomist): they could not deny his presence nor his prophethood, so they made him look ridiculous. Jonah is another matter; in 2 Kings 14:25 Jonah is mentioned but without any reference to this story, and there is ample internal reason to posit the Book of Jonah much later than the reign of Jehoash in Israel, in fact some three centuries later in the 6th or 5th century BC. Indeed, the Book of Jonah sits well in the Second Temple period, after the return from Exile, at a time when hosts of prophets, self-claimed or called, manifested themselves, thinking very highly of themselves, acting as authority figures with or without any legitimacy. The Book of Jonah probably is not directly against one specific ‘prophet’, but more against the type, that had become a stereotype at that day and age. 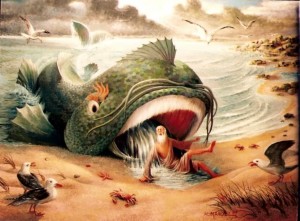 One of the many, actually quite funny, images that the tale has generated

For later ages the butt of the satire has disappeared as times had changed, and canonizers of the Old Testament, another three centuries later, read it as a parable, using the beautiful prayer as a lead (which, when read closely, does not tally at all with Jonah’s situation inside the fish), or the great declaration of mercy: … ‘for I know that You are a gracious and merciful God, slow to anger and abundant in loving kindness, One who relents from doing harm’ (Jonah 4: 2b). The Mishnah commentaries from shortly after that time attest to this interpretation. But for them, too, the message was more important than any ‘historicity’. Also when Jesus referred to the ‘sign of Jonah’ he used the storyline as a symbol for his death, not any historic event.
So we can, I think, stop wondering how a fish can keep a person alive, why the Assyrians never mentioned anything about a monumental mass conversion, how Nineveh could be 8100 km2, why a prophet would stimulate the great abomination of human sacrifice etc. We do not recognize the satire any longer because we do not have this kind of ‘prophet’ any longer, but we surely can draw other kinds of lessons from the satire. With the Rabbinic scholars we can read it as a parable. First, the lesson of universalism: the gospel is for everyone, even for those Assyrians, even for people who ‘cannot discern between their right hand and their left’ ( the last line of the book). Second, God’s mercy on the basis of repentance, though we leave out being gobbled up first by animals, I think. Third, the importance of having a prophet, and respecting his call; here the sailors are our example, who tried to save Jonah even when he did not want it himself. 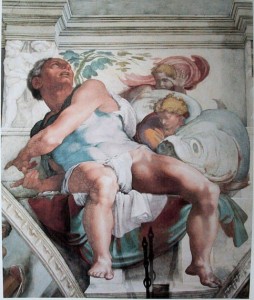 As a prophet Jonah has been an inspiration for great art as well: Michelangelo’s Jonah

But the satire is still there, and pertains to us as well. The butt of the satire is the self-centered authoritarian, the one who is terribly important in his own eyes, who wants to have all the honor and the glory, who wants to have his hour in the limelight, but does not really measure up to his duties, who does not behave according to his stature, who has little compassion with his lowly fellow men. We do have a lot of those in our age; everyone can make her or his own list. Both media and politics form the main seduction here: the celebs who have little to show but just manage to stay on screen, pick your own. But also political leaders who have betrayed their cause in order to remain in power need to be satirized thoroughly; from my own lifelong interest in Africa I have quite a list… 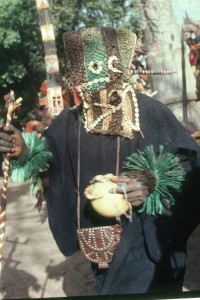 Among the Dogon masks are serious business, important in their religion. Yet, also in mask rituals, people are satirized; on this photo a mask of a ”seeer’, important and yet very funny in his particular dance.

Finally, humor in the Scriptures. Does God laugh? I think He does, quietly, and as discreetly as the humor in the stories of Balaam and Jonah are presented, packed as they are inside a compelling story. (For those, who want scriptural support, read Psalms 70,5; 40,17; 37,13 and Eccl. 3,4). He surely avoids loud laughter, but may very well engage in a soft chuckle. Laughter is the most human of all actions (apes do not laugh, as far as we know, for the rest the differences are small, though I am not so sure about dolphins) so why deny the celestial sphere the most liberating and energizing of all emotions, humor and laughter. Thus, inside the Church, I feel proud of our tradition of Mormon humor, for the ‘Leavening’ as one collection calls it, for the cartoonists, we need and—I hope— also deserve. A General Conference without the audience chuckling at least at some moments, is an opportunity wasted. Our late Dutch GA, elder Jacob De Jager, was an example of humor in talks—I still fondly remember his great talk about people in a balloon—but the memory of Golden Kimball is still a dear and cherished one. We need more of these, always. I look forward towards a hearty celestial laugh with the author of the Book of Jonah, but I especially would enjoy a conversation between him and ‘Golden’, what a treat! 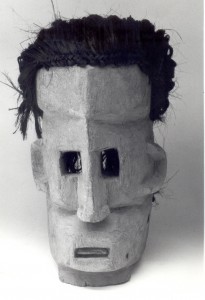 Also white people are satirized: this Dogon mask represents the author, good for a hearthy laugh by all Dogon!

17 comments for “Laughing with the Bible”