Well, a billion years of geological history and a couple hundred years of Mormon history. That’s what I saw last month on a rafting trip down the Colorado River through the Grand Canyon. But not everyone sees the same thing. 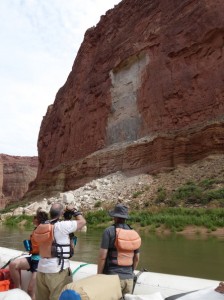 Building a canyon one rock slide at a time.

It takes a long time to make a canyon. That seems perfectly obvious when you see fresh rock on the canyon wall uncovered by recent rock falls (recent means within the last hundred years or so), with the fallen debris adding to the talus slopes that have accumulated between the various rock strata. It’s easy to run the clock backwards and see that process forming the physical geography of the canyon slopes over hundreds of thousands of years, along with slow, steady erosion by the coarsing river below. As you float down the river, you are actually traveling back in geological time. The rock exposed by the action of the river gets older by hundreds of millions of years as one moves deeper into the canyon.

Not everyone sees the Grand Canyon as millions of years old, of course. Andy the diplomatic river guide was always careful to add “according to geologists” when dating a layer of rock at 200 or 300 million years old. In fact, there are guided rafting trips that actually cater to conservative Christians, with commentary explaining how it all happened in 6000 years. You can take the Canyon Ministries and Answers in Genesis trip (“see Grand Canyon from a creationist perspective”) or the Creation, Evolution & Science Ministries trip (the website quotes Psalm 46:8, “Come, behold the works of the Lord, what desolations he hath made in the earth.”). 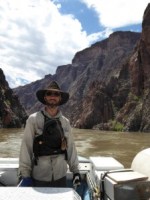 While the 19th-century Scottish geologist Charles Lyell never saw the Grand Canyon, he did see similarly exposed rock formations in Scotland, giving rise to his idea of uniformitarianism and what we now call deep time: slow but persistent geologic processes working over millions of years giving rise to Earth’s physical landscape. Charles Darwin read Lyell’s Principles of Geology while on his five-year mission to explore new worlds on the HMS Beagle. Deep time was the necessary context for his thinking about slow but persistent biological processes that shaped life on earth. So in some ways the Grand Canyon is conceptual ground zero for modern geology and evolution. Rocks and canyons, isolated species at the bottom of a mile-deep canyon, geology and evolution, beauty or desolation, echoes of Lyell and Darwin, a billion years of history: you see it all as you float down the river.

And then there is the Mormon history tied to the canyon, probably as annoying to the Creationist rafters as the hundred-million-year-old rocks. Our trip started at Lee’s Ferry, a conveniently isolated locale where John D. Lee, the only man eventually convicted of a crime in connection with Mountain Meadows, passed his last few years with his wives. In Marble Canyon one finds Badger Creek and Soap Creek with associated rapids where they empty into the Colorado. Mormon scout Jacob Hamblin named them for an unlucky badger shot at the first canyon and boiled into soap (oops, there is alkali in the water) at the second. 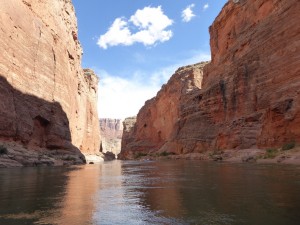 Deep time in a deep canyon.

Farther down the river at Separation Canyon, three men from John Wesley Powell’s first expedition in 1869 climbed out rather than continue down the raging river. They were killed by local Shivwits Indians, according to most accounts. In his book Under the Banner of Heaven, Jon Krakauer endorsed the unlikely theory that local Mormons killed the three men, which interjects a Mormon angle into what was a sad affair all around. The following year Powell visited the Shivwits with Jacob Hamblin. Here is Wallace Stegner’s account of that meeting, from Beyond the Hundredth Meridian.


The Shivwits admitted freely enough that they had killed Powell’s three men. But they had not understood who they were. The three had arrived worn out and hungry. After them came a runner from another band saying these three must be the prospectors who had molested and then shot a squaw. The more the Shivwits talked over the story the white men had told of coming down the big water, the plainer it appeared that the three men were liars. Eventually warriors followed the strangers and shot them with arrows as they lay asleep.

Actual friendly Mormons, not fictional murderous ones, greeted Powell and his remaining five men on August 30, 1869, as they exited the canyon. Stegner again: “Just after the noon stop they saw four men pulling a seine in the river. They were a Mormon named Asa and his two sons and an Indian, and they were there on instructions from Church headquarters in Salt Lake City to watch the river for wreckage or bodies from the Powell Expedition, reported lost weeks ago in the depths of the Colorado canyons.” Powell went to St. George, awaiting news of the three who climbed out, then to Salt Lake City where he met Brigham Young for the first but not last time.

For those who have visited, what did you see in the Grand Canyon? And what piece of Mormon history did you stumble across in this stark and arid country?

7 comments for “Floating Through a Billion Years of Mormon History”