It would seem that when a text is nearly two thousand years old, there might not be a whole lot new to say about it. But this isn’t the case for the Gospel of Mark.

Mark was basically ignored for 1800 years because it was presumed to be an abbreviated version of the Gospel of Matthew, so everyone just studied Matthew. But then, when the texts were re-approached with a more critical eye, it became apparent that Mark was actually written first and that Matthew (and Luke) used Mark as a source. Then Mark sure got a lot of attention!

Some of it was focused on identifying from the existing ancient manuscripts–which are not identical to each other–which wording was most likely to be the earliest reading. This is called textual criticism and it is the most “scientific” type of criticism in the sense there are set guidelines for determining which reading is earlier. (The older term for this, which you’ll see in some older Mormon sources, is “lower criticism.”) This is really a fascinating field of study because it is much like detective work. And it can often be counter-intuitive. For example, when faced with two possibilities, the reading which makes less sense is more likely to be the earlier reading. Imagine we have two options for a reading, as we do in Mark 1:41, where some texts say that Jesus had compassion and others say that he was angry. Which makes more sense? Obviously, that he had compassion on the leper he was about to heal. Which means that anger is actually more likely to be the earlier reading because we can much more easily imagine a scribe saying “hey, anger doesn’t sound right–they must have meant compassion” than we can imagine a scribe thinking the opposite. (It’s a smidge more complicated than that in this case, but you get the idea.)

While textual criticism has been a perennial concern for the modern study of Mark, other approaches have bloomed and then faded. During the twentieth century, much effort was focused on determining which parts of Mark were written by Mark and which parts came to him from a pre-existing tradition.  While I don’t doubt that Mark wrote some things himself and inherited other things, I tend to agree with the critique that this kind of study is not terribly useful: there is little consensus and even when there is, so what? It doesn’t make much difference to me as a reader whether Mark found the next ten words in his source or whether he strung them together himself. Other trends included identifying “forms” of material: healing stories, pronouncements, controversies, etc. There is, I think, some use to realizing that certain stories tend to have certain characteristics, but since the forms are not quite as exact as one might like, there are limits here as well. When you hear statements from people like Elder Bruce R. McConkie talking about how useless academic biblical studies are, these are the kinds of thing that they are talking about, under the umbrella of what was then called “higher criticism.”

But beginning in the late 70s and early 80s, narrative criticism took over the study of Mark. No longer were scholars concerned as much about the text’s backstory (Did Mark write this phrase?); instead, they took the text as a whole and treated it like a story: How does Mark use irony to make his point? How do the stories relate to each other? What themes are present? How are the characters developed? How does word choice impact the reader? These questions, I think, have much more import for the average reader–including the devotional reader–of Mark. There is rich material for a Sunday School class. For example, Mark has a tendency to “sandwich” stories. A classic example of this is that the story of the bleeding women is sandwiched between the two halves of the story of the raising of Jairus’ daughter (see Mark 5). The woman and the girl have a lot in common, not the least of which is that the number twelve is used to describe both of them; they are also both “daughters.” If I were teaching this passage, I’d ask the class to think about these and other similarities, as well as the differences between the stories, to see what we might learn about Jesus’ healing ministry from them. There is a lot to say, but one theme I would certainly draw out is that the poor, unclean, socially marginalized woman has just as much access to Jesus’ healing power as the wealthy, pure, socially powerful male. 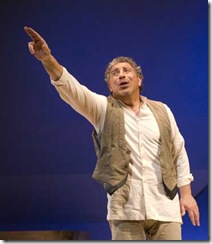 The latest wrinkle in the narrative study of Mark concerns the fact that Mark was almost certainly intended to be read out loud to its audience. In this regard, it is somewhat like the text of one of Shakespeare’s plays in that the primary existence of the work is not the written text; rather, the written text is merely a tool that the performer uses in order to be able to present the work in its primary state, which is an oral performance. In Mark’s world, something like 92% of people were illiterate–they weren’t reading his text. They were gathering together and one person performed the text, in its entirety, for them. I would strongly recommend that you watch someone perform the Gospel of Mark to recreate this experience. (One option here.) Performance criticism has led to some really interesting insights into the study of Mark’s Gospel. For example, when Jesus says in Mark 3:34-35:

And having looked around at those sitting in a circle around him, he says, ‘Look! My mother and my siblings. For whoever does the will of God is my brother and my sister and my mother.'” (my translation)

. . . you can kind of imagine how a storyteller might play up that line by gesturing to the audience who is literally sitting in a circle around him and inviting them to think of themselves as being part of Jesus’ family. It is a powerful moment.

And thus ends a too-brief survey of the history of the interpretation of Mark. What’s next? I have no idea. But, for the moment, narrative criticism offers the average reader of Mark the opportunity to take tools they should already have from their high school English classes and use them to ask fresh questions of the text.