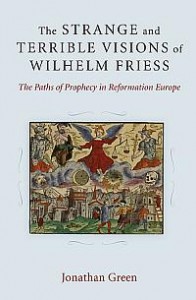 So I wrote another book. At first I thought that I was writing a short article to explain why two different Reformation-era prophecies share the same title, but the project kept expanding. Along the way, I changed the way I think about biblical textual criticism and the Documentary Hypothesis.

The stemmata codicorum, the diagrams of relationships between manuscripts that we have inherited from previous generations of scholars, look so definitive when you see them on the page. If you’ve never tried constructing one yourself, particularly for an older text in an older language, you may not have a good sense for how much uncertainty or how many unresolvable textual problems those tidy diagrams might not show you—and very few people have direct experience today with reconstructing the history of an unstudied text, even among those with doctorates in the humanities who specialize in earlier periods. It is not until you find yourself confronted with twenty versions of a text, with no one else to guide you in determining how they are related and what the original looked like, that you realize how much painstaking labor goes into building a stemma, and how much uncertainty remains once you have finished.

If you read only the popular accounts, the process sounds easy: Identify textual variants, then select the lectio difficilior as the original, or apply some other canon of textual criticism to the same task. But is it more likely that an originally difficult word has been replaced with a reading that restores sense, or that a transcription error has rendered a mundane word into nonsense? (I encountered both.) Once you determine what the original reading is, you use shared innovations to classify the textual witness into groups. But is it really impossible that two copyists could have arrived at the same innovation independently? Sometimes unlikely things happen. Everyone knows that the oldest witness isn’t necessarily the best, but it still comes as a surprise when the latest witness turns out to reflect the earliest stage of the text. The tools that we have to answer our questions about textual history are inadequate to the challenges we face, and the data are always insufficient. And yet choosing to simply ignore the question is not an option. 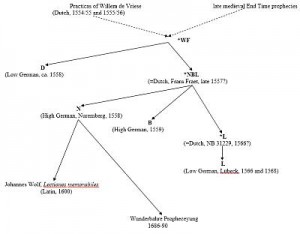 I classified my texts, sketched out the relationship between them, and attempted some internal reconstruction, as there were several cases of resumptive repetitions where later material appeared to have been added to the text at some point earlier than the common ancestor of all available witnesses. In doing my own textual criticism, I saw that preferring one reading over another was always an exercise in probability: It was usually far more likely that a passage had been deleted from one witness than added in all the others, or that a shared innovation derived from a common ancestor rather than arising independently in two separate texts—but the probability that all the inferences that motivated the text’s stemma were correct was itself vanishingly small. For all my uncertainty, I eventually came up with what seemed like the most plausible classification of my textual witnesses. You go to press with the evidence you have.

And then I discovered the source of my text. My sixteenth-century prophecy turned out to be a translation of a fifteenth-century French redaction of a fourteenth-century Latin work, the Vademecum of Johannes de Rupescissa, itself composed of citations from and references to numerous earlier texts. The basic diagram of texts eventually turned into a tree diagram with multiple roots and branches that split apart and then re-crossed. 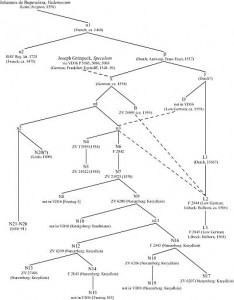 In other words, I had been given the rare opportunity to consult the answer key after completing my homework. How had I done? My basic outline wasn’t too bad, but it’s incomparably easier to distinguish an innovation from a retained original reading if you have the original. As for those resumptive repetitions? I was right about half the time. The rest of the time, what appeared to be a later insertion was present in every version of the text back to the earliest known source. In the end, there was no single best textual witness. Some uniquely correct readings were found in almost every textual witness, including some of the latest and most eclectic ones.

The processes of textual history are not universal, as different literate cultures permit different things with respect to particular texts or genres, but perhaps inevitably I now tend to interpret all textual historical claims in light of my own slight experience with it. They say that the Old and New Testaments have undergone a great deal of change during the history of their development, and this seems unquestionably true to me. The only texts that do not change are dead texts that no one reads. People created the Bible by reading it and improving it. Through the ongoing work of translation and adaptation to new contexts and into new media, the Bible continues to change today.

Sometimes on Mormon blogs, one comes across an attitude I’ve come to think of as pathetic Lachmannian inerrantism, the devout belief that the Bible would be clear and infallible if only we had access to the original versions. But the reality is that access to the original will not answer all our questions. (In my case, even access to the original text did not tell me everything I wanted to know about its first appearance in the Reformation era, a Dutch edition of late 1557 that remains stubbornly lost.) Even worse, there is no original. Reconstructing older forms of a text and even manuscript discoveries of miraculous serendipity will not restore lost moments of pure inspiration. What we would find instead are acts of textual expansion, compilation, adaption, commentary, and allusion reaching back to prior texts without end. The practices that corrupted premodern texts are the same ones that created them.

So what of Markan priority, Q, and the Documentary Hypothesis? After attempting some textual criticism of other texts on my own, I’m more likely to regard them as brilliant and possibly even correct, necessary but possibly irrelevant for devotional reading.

There is a mutilated form of the Documentary Hypothesis that regards all of the Old Testament as a composition for Jews living in exile or returned from it. I am now more inclined to doubt that the original audience can be so neatly pinned down. The latest edition of my text appeared in 1691, but the text underwent numerous changes before that in the fourteenth, fifteenth, and sixteenth centuries. Even the latest version owes much of its form to earlier centuries. But if one only had the latest version, it would be almost impossible to reconstruct that prior history or to correctly decide to which chronological layer much of the text belonged. The Documentary Hypothesis can be the source of important and devotionally useful insights (as Walter van Beek regularly reminds us), but I’m now more likely to see the significance of Exodus for post-exilic Jews, for example, as only one stop among many between an unrecoverable origin and modern Mormon devotional reading. The Bible has always been a transhistorical text.

22 comments for “A self-guided walking tour of Higher Criticism”