Yes, we do, a lot of temples, more than ever in history. We are, as the leaders never stop telling us, a temple building people, and if anything distinguishes us from our fellow-Christians it is our temples. For us the temple is a crucial religious and ritual focus, the apex of our notion of holiness; it is also somehow a link with a distant past, with the deep salvation history of mankind, through Israel. Indeed, one of the themes running through the Old Testament is exactly that of the temple. But what is temple, and what continuity is there among the temples? What is the ‘third voice’, the one of the author, on the temple tradition in the religion of Israel and Judah? We focus first on Jerusalem. 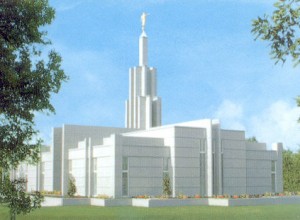 The Dutch temple in Zoetermeer

It all starts, as everything in the bible, with Moses, with the Pentateuch. Exodus gives a wonderfully detailed description of the ark and especially of the tabernacle, richly decorated, with lots of gold and silver, rich tapestry, and intricate construction of the ark and a tent made of dugong or badger skins. The description of the tabernacle takes up almost half of Exodus and does raise a lot of questions. Dugong or badger, the skins of which should cover the temple, the discussions on the meaning of tahash (tabernacle, but that is a Latin term for tent) is still raging, but both animals are equally unbelievable inside the Sinai desert, especially in the numbers of skins needed for such a tent cover. But the whole description of Exodus 24 – 40 is highly questionable: the idea that all these metals, rare fibers, special woods, and exotic dyes could be found in the desert is, to say it in correct academese, ‘extremely improbable’. The tent was probably much simpler and smaller, and a description of the Tent of Meeting (Exodus 33:7-10) would fit in with that notion, but there we are in an E part of Exodus, the older source. The exuberant description is a P text, Priestly, much later, in effect post-exilic; as I said earlier the description of the temple in Exodus should not be read as a blueprint for building, but as a reminiscence of a lost temple; in exilic times this would evidently be the Temple of Salomon, as remembered in Babylon, projected into the pre-history of Israel in the desert. A temple in words is what they created. 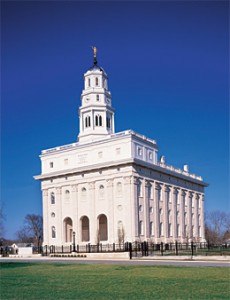 A temple in words. As I explained in my last post these post-exilic priests in Judah and Samaria, who finalized much of the Pentateuch after the return of Judah from Babylon, were not in league with Nehemiah and Ezra, who actually built the temple; they had their own agenda. They did wanted a temple in words, a spiritual temple, so they wrote a book which in many ways was the temple. It is not easy to see, but it is the book of Leviticus. The building plan comes from the Priestly part of Exodus. The Tabernacle – so the temple-in-memory – as described in Exodus 24-40, is built of three rectangles: a large square is the Court of Sacrifice or Outer Court, the second is a rectangle, the Holy Place, while the Holy of Holies is a small square – in Salomon’s temple a perfect cube. The Second Temple would have the same dimensions. It is this structure that, on close reading, does inform the book of Leviticus. The rules and prescriptions fall into three unequal categories: the chapters 1 – 17 pertain to all the rules of purity and cleansing for the public, the sins and their forgiveness: this is the public section, the Outer Court. Chapters 18-24 handle the duties of the priests, details on the sacrifices, this is the holy place. Finally, the last part, 25-27, handles the law of the Jubilee, when special sacrifices are offered up to the Lord, when slaves are freed and debts cancelled: the Holy of Holies: Leviticus has the structure of the temple plan.

But there is more to that. The 17 chapters constitute a reading tour around the Court of the Sacrifice, from the entrance seven to the right, seven to the left, and three mediating the transition to the Holy Place. Chapters 18-24, another seven, form a virtual tour of that rectangle, while the three last chapters form the apex of the meeting with the Lord. The symbolism of the numbers is clear: 3+7+7, 7 and 3. This may sound farfetched, but in the worldview of post-exilic Jews is not: Leviticus is a temple in words. Thus, the Jews in diaspora could use Leviticus in their synagogues – an institution that originated during the Exile – and walk the hall reciting the book, experiencing a temple in spirit. The many rules of purity embedded in Leviticus – the food proscriptions are just one of them – redirected their special relation with YHWH from a collective one – the temple itself – into an individual one. Earlier it was the temple that had been the focus of rules of purification and holiness, directed at the building and the priests; the chapters 18-24 originate from what scholars have identified as the Holiness School, and that is exactly their function in the structure of the book. But the spiritualization of the temple meant that this holiness became a personal one, not just for the priests and Levites, but for all of Judah, it had to become a priestly nation.
The structure of the Jerusalem temple was not alien in the Middle East at all, but in fact a variant on a usual three-partite temple lay-out. For Israel the tabernacle, so the temple, derives its basic structure from its likeness to a mountain, to the holy mountain of revelation, an age old association that has often been noticed in the whole region, and has been commented upon extensively. For Israel that was either Sinai or Horeb, depending on which source document is used, J or E, as they both figure in Exodus. In Exodus 24 the lower slopes of the mountain Sinai are for the people, on the middle slope Aaron, Nahab and seventy elders from Israel feast with God: ‘They saw the God of Israel. And there was under His feet as it were a paved work of sapphire stone, and it was like the very heavens in its clarity. But on the nobles of the children of Israel He did not lay His hand. So they saw God, and they ate and drank.’ (Ex. 24:10-11) The wording sounds familiar to LDS. Finally, Moses proceeded in the very presence of the Lord on top of the mountain, where he remains forty days and forty nights. (The text is a little garbled in this chapter as the J and E sources intermingle here.)
So the temple is the re-enactment of the birth of the covenant, the principal creation tale in the Old Testament. And this holds not just for the Jerusalem temple, either the First Temple (the J source might well stem from the Solomon court) or the Second Temple, but most of the shrines and temples in pre-exilic Israel. We are used to the one-and-only Jerusalem temple, but there were many more shrines in pre-exilic Israel: Bethel (the Jacob site) Sechem, Gerizim. Especially the patriarchs, the pre-history of the Old Testament, erected shrines all over the place, and the unique position of Jerusalem came late, just before the Exile. But then, before Exile, YHWH had competitors in other gods. And any temple was a holy mountain.

Those Priestly authors did more than make a temple in words, they wrote a wonderful piece that we know as the first creation story, Genesis 1-2.4. (The second story, Genesis 2.5 – 4 is from a combined J and E source, and quite different, sometimes contradictory). The tale of Genesis 1 may have been inspired by Babylonian creation myths – which the priests surely learned about in Exile – but has a completely non-Babylonian theology: no battle between the gods, but a majestic march of an uncontested God towards a harmoniously created world, including humans. This Priestly creation tale served not just as the introduction to the book, it was to all probability also used as a temple text, to be recited in the Second Temple itself (it did not exist yet at the time of Solomon’s temple). The Priestly ‘temple in words’ became ‘words in the temple’, part of a ritual cycle that was the very heart of post-exilic Jewish worship. 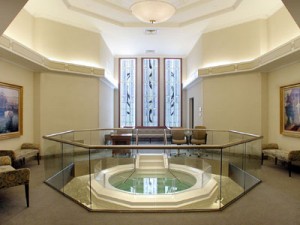 Our invented tradition’: the ‘sea’ as a baptismal funt

Here, evidently, our temples do come in. What happens in Latter-day temples bears little relationship to either First or Second Temple rituals; those ancient buildings where sacrificial centers, streaming with blood, and smelling of incense and burnt meat. The link between the laver and the Latter-day baptismal font is not historical, but a quite creative one; in fact it is what anthropologists call an ‘invention of tradition’, worthy of what the Priestly editors did with their J and E texts. But especially the temple text does form a link over the ages, as the creation tale is still there, supplemented with 2nd Genesis story, merged together by a new writer of scripture, Joseph Smith, who created a temple-in-words inside a temple. The notion of holiness is still paramount, as it the idea of a priestly nation in a collective-cum-personal covenant with YHWH. The sacrifices have been spiritualized in an initiation journey, but the majestic enactment of the Priestly temple text is central, a tribute to the anonymous ancient authors of Script, and the not-so-anonymous author of the Latter-days. Yes, the bible is written by men, and much we can learn if we look at the text this way.

A temple, thus, is a building, but primarily an idea; it is the idea of the temple that binds us to our mythical past, not the rituals in our temples, who are inspired by other ‘inventions of traditions like the Masonic one, nor the architecture itself, which is also new. We have temples to make us into temple people, covenant people, not the other way around. ‘A temple, a temple, we already have a temple’ thus could be read as ‘a temple, a temple, we already are a temple.’

13 comments for “A temple, a temple, we already have a temple”