A couple of weeks ago I listened to the audiobook of Sikhism: A Very Short Introduction. As that was the first thing I’ve read on the topic (other than a multitude of Wikipedia entries) I by no means consider myself some kind of expert, but I was struck by several parallels and differences between Sikhism and Mormonism. The little I have learned has already helped me to see my own faith in new ways.

In terms of similarities, Mormonism and Sikhism are both relatively new religions that arguably constitute a culture or a people (in addition to a religion) and that both have fraught historical relationships with larger faith traditions. Sikhs, for their part, have historically worked hard to stress their distinctiveness from Hinduism. Mormons, in contrast, have recently stressed our desire to be included within Christianity. In both cases, however, the exact nature of the relationship is complex and subject to change and controversy.

The contrast that stood out that most to me was the ambiguous evolution of Sikh theology and scripture and institutions juxtaposed with the rigorous organization of the correlated Mormonism that I grew up with. Obviously this is apples-to-oranges, since I was comparing a snapshot of a relatively mature Mormonism with the historical origins of earliest Sikhism. Mormonism didn’t start out correlated and our own history is full of ambiguity as well. But it was illuminating to study the history of another faith’s development precisely because it wasn’t my own. It left me able to think about issues of religious development in a detached way that I find difficult when I delve into Mormon history. 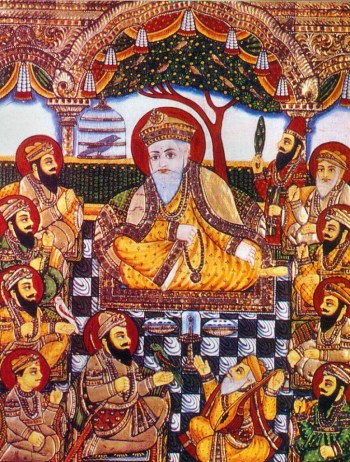 In the book, Eleanor Nesbitt contrasted the dogged opposition to all ritual and formalism of the first Guru, Guru Nanak, with the expansion of the institution of the Guru ka Langar under his handpicked successor, Guru Angad. This change, along with a general shift from the nomadic life of Guru Nanak to the burgeoning cultural centers that came to define Sikhism in future years, can superficially be seen as a contradiction to those studying Sikhism.

To my mind, it echoed similar contradictions within my own faith. According to the 6th Article of Faith, “We believe in the same organization that existed in the Primitive Church, namely, apostles, prophets, pastors, teachers, evangelists, and so forth.” Mormon scripture often emphasizes this inter-dispensational continuity, whether it is with depictions of baptism in the Old Testament era Pearl of Great Price, or the sacrament ordinance in the New World, or (moving outside the scriptural canon) connections between modern temple ordinances and ancient texts and rituals.

And yet, even as a kid, it was readily apparent to me that this continuity was imperfect. We use the word “prophet” today in a way that is very different from its original meaning. The office of deacon was clearly not for just any 12 year old in New Testament times. The organization of priesthood quorums in my ward has never seemed to perfectly enact the layout from the Doctrine and Covenants. What are we to make of these, our own, apparent contradictions?

Of course for many people the differences are minor enough not to require a full explanation, and that’s perfectly valid. The shift from adult to adolescent deacons has always bothered me a little in that (1) it seems incongruous and (2) it maybe even diminishes or cheapens the office somewhat. But it doesn’t exactly keep me up at night.

However, I’m not the kind of person who can ever really let go of something that doesn’t make sense. Just because I’m not actively being kept up at night worrying about a problem doesn’t mean I’ve forgotten about it. I have a very crowded back burner where I place such issues instead of entirely forgetting or dismissing them. I get on with other things, but all the while I’m also waiting and hoping for new information or a fresh perspective that will help turn paradox into truth and weakness into strength. I sleep on the mattress ‘cause it’s the better than sleeping on the floor, but I’m hoping that one day I’ll be able to find and remove that darn pea. 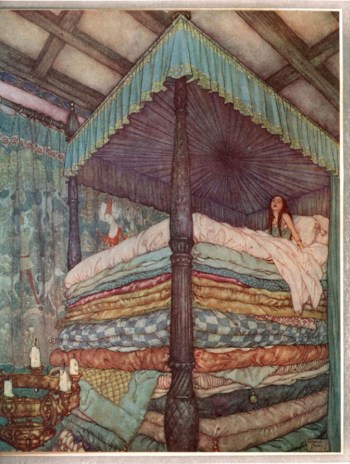 I envision Hans Christian Andersen’s princess as a long-suffering theologian of discernment and principle.

In this case, I found that thinking about the role of ritual and formal institutions between Gurus Nanak and Angad gave me just the kind of fresh perspective I’d hoped for. Nesbitt didn’t spend a lot of time describing how Sikhs have themselves addressed this issue, other than noting that they believe the Gurus presented the correct practices and teachings relative to their situation and time period. Nor do I think that my opinion is either wanted or qualified on matters of Sikh theology. Instead, I used the question as a kind of surrogate for musing about Mormonism.

One possibility is to differentiate between conflict and precedence. It’s entirely reasonable that Guru Nanak’s steadfast opposition to ritual had to come first in order to establish the priority of sacred experience as an end. Then—only after Guru Nanak’s teaching and building on top of them—it was possible for Guru Angad to re-introduce rituals and institutions within their proper place: as means to ends rather than as ends themselves.

This idea, precedence vs. conflict, is important because it draws our attention away from truth possessed by individuals towards truth possessed by communities. As a person with an interest in complex systems, I like to consider human societies to be a kind of superorganism, which is “an organism consisting of many organisms.” The textbook example of superorganisms is the beehive, which has led research Jonathan Haidt to describe human beings as 90% chimpanzee and 10% bee to reflect the deep evolutionary adaptations humans have made to form societies. (This is relevant to complex systems because an alternative definition of a superorganism is “emergent property of interacting organisms.”)

Generalizing away from the specific question of Gurus Nanak and Angad, we can imagine two individuals who appear to disagree with each other on a particular issue but whose viewpoints, taken together, form a cohesive whole. The individuals might disagree, and their respective viewpoints might be flawed and wrong, but if they are bound together in a community then the community might—by synthesizing the apparently divergent views—be more correct than either individual could be alone.

What does it mean for a community to be “right”? Well, that could be a complicated metaphysical question, but for now let’s just say that one way in which a community can be right is by having individual members take generally correct action in response to problems. Think of a family with a very strict parent and a very supportive parent. It’s possible that either parent—alone—would be fail to provide the right balance of love and discipline that a child might need but—together—could get things right. You could say that the divergent parental models are synthesized. The family is more right, in this case, than either spouse could be alone.

The idea of the Church (referring to the members, in this case) as a kind of superorganism is distinctly promising given the Mormon conception of truth. As President Howard W. Hunter said, “all truth, wherever found or however apprehended, is circumscribed into one great whole.” To me this is a beautiful hope, because it holds out the promise that one day we will be able to reconcile our differences and see eye-to-eye.

In the meantime, however, we can have faith that—led by Christ—many of the apparent contradictions and differences might be merely reflections of individuals holding shards of the great ring of truth and not realizing yet how the pieces fit together. The Church–the superorganism–might be more right than we–the individual organisms–can perceive.

This is not to say that all is well in the Church and no one is wrong. There is Satan as well as Christ, and that means there are some falsehoods and lies out there which cannot be reconciled or synthesized into a greater truth.

So how many of the political, ideological, theological, cultural, and other kinds of differences within the Body of Christ may in fact turn out to be complementary perspectives that, while contradictory at ground level, can be synthesized into a truth that is perhaps grander than any one member can perceive in this lifetime? I don’t know, but I’m sure the answer lies somewhere between “all of them” and “none of them.”

So what’s the point? The point is that some of the apparent differences and contradictions within Mormonism are only apparent differences. Others are truly irreconcilable. We should probably keep an open mind—both in our attempts to understand our faith and in our dealings with other members—as to which differences fall into which category. This perspective doesn’t make the problems and contradictions suddenly go away, but it can make them more manageable while we muddle through.

← Book Review: The Crucible of Doubt
A temple, a temple, we already have a temple →

9 comments for “Truth and Contradiction in Religious Communities”