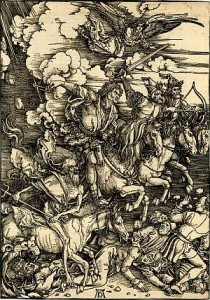 By the late Middle Ages, the Christian end-time narrative had grown from diverse biblical seeds into an elaborate and cohesive drama that was something like a family sitcom in syndication: The cast of characters was firmly established and their roles and relationships were well known, even if the precise order of particular events was fluid or open to debate. If we take Johannes de Rupescissa’s Vademecum, composed in 1356, as our guidebook to the late medieval Last Days, we might identify the most important people and events as the following.

Without going into great detail, I think it’s clear that we can map all of these elements, in whole or in part, onto people in the Book of Mormon. For example:

9 comments for “Alma and Apocalypse”