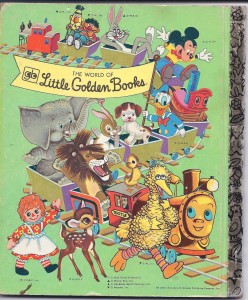 Early in my book publishing career, I worked for an innovative publisher of high-quality childrens picture books. One day, in conversation with my boss, the publisher, I criticized the Little Golden Books, a long-running line of cheaply produced picture books with very simple (and, I thought then, not very notable) stories. To my surprise, my boss leapt to their defense. Without the Little Golden Books, he explained, millions of kids wouldn’t have been read to as children, and my not have learned to read. In my focus on issues of quality, I had not realized that purpose is more important than quality, and, in a sense, actually defines what is quality.

That lesson has stayed with me for about 20 years now. And one of the places I’ve been able to use this idea is in reading reviews. A reviewer’s job is to judge the quality of the film or book or music or product being reviewed. But in doing so the reviewer makes assumptions about what is important for his or her audience. He constructs the criteria used to judge quality. But often those criteria don’t match what many, if not most, of the audience use.

Take McDonalds, for example. Last night I came very close to going to McDonalds—but not because I like the food. I doubt many restaurant reviewers would give McDonalds high marks. And despite criticisms of its quality by reviews like the documentary film Supersize Me, McDonalds is still going strong. I saw that film, and I don’t have a strong opinion of McDonalds. I don’t think I get food from McDonalds more than once in a blue moon. So why did I consider getting McDonalds last night? Convenience. I was driving my daughter to an after school event, and McDonalds was the drive-through restaurant on our way. Simply put, it fit my criteria of the moment. Fortunately, we found another place to get quick, better, convenient food.

I know this is all rather obvious, but sometimes we don’t remember. We see a film, read a book or listen to music that we think is bad, and we say “What were they thinking?” Or “I don’t get it.” Or, worse, we assume some nefarious motivation or attempt at deception. We are judging the work or product based on our own criteria and understanding of what the audience wants. Who hasn’t looked down the list of current films at their favorite review site and wondered why anyone would go to all those films with just one or two stars? Or looked at all the one or two star videos on Netflix and wondered who would watch them and why they were even made! Believe it or not, the makers of Sharknado didn’t expect it to gain any notoriety or attention—they made it with low expectations.

I was one of those invited to preview the LDS Church-produced film Meet the Mormons last week in one of the major theaters here in New York City, and I thought it was really quite good. For those who don’t know, the film profiles the lives of six Church members from around the world. Some of them are notable, like Navy football coach Ken Niumatalolo, while others are simply successful local church members, chosen because their stories would be interesting. And their stories are entertaining—there isn’t one of them who I wouldn’t enjoy talking with for several hours, hearing the details of their lives and understanding how their thinking got them to where they are today.

But, of course, no film can do that. Such a film would be too long. Nor can a film be strictly representative of members of the Church. I suspect most members’ lives are simply not interesting enough for a film—I know my life likely is not.

But the mix of those in the film is, I think, representative, at least in what we aspire to. Racially it includes an African-American (and a second African-American who appears in his mother’s story), a Hispanic woman, an Asian man, a man of Pacific-Islander origins and two Caucasians. A disabled man appears in one of the profiles. There are four men and two women profiled. Two of those profiled live outside of the U.S., in Costa Rica and in Nepal. This may be a kind of aspirational diversity, but I don’t think its that far off—last I checked more than 50% of Church members lived outside the U.S., but in terms of active members its probably less than half. Racially Mormons are probably much more white than this mix (but would you really want to see a film with just white Mormons?) I’d rather have this indication that the Church aspires to a diversity that we don’t yet have than not.

The film does not discuss much Mormon history or doctrine, and it is light on Mormon practice. There is no attempt to defend Mormonism really, because it isn’t telling viewers much about Mormonism, other than what a handful of Mormons are like. It is simply an introduction to a group of individuals who are Mormon. But you come away from the film with a positive feeling about these individuals. Its like a teaser—you want to know more about what makes these people tick.

So if this film is just a teaser, a PR puff piece (as I’ve heard it called), why is it in theaters? And why is the Church trying to get it into theaters? What are the factors that reviewers and outsiders might be missing?

Similar PR pieces have appeared in theaters before. When my children were little we had to go to The Pokemon Movie, for example. Occasionally such movies are even fairly popular (as I understand it, The Lego Movie has been quite popular). I’ll bet you can come up with many others that fit.

At the preview showing, I learned something of the story behind the film. Director Blair Treu was tasked with making Meet the Mormons as a film for the Legacy Theater in the Church’s conference center in Salt Lake City. It is exactly what you would expect for that purpose. And if you use the criteria you would expect for a Legacy Theater film, I think you have to call this a high quality film. It piques the interest for further investigation, be it through missionaries or exploration on the Internet.

But when the film was shown to test audiences in California, the feedback was stronger than expected—so much so that it seemed like it might work in theaters. Apparently, at least among the test audiences, the film met some criteria that made it worth seeing in theaters.

Of course, the benefit to the Church is in changing (usually unfounded) perceptions about Mormons. The long-term goal is not to have Meet the Mormons in theaters itself, but to get it available in places where the public might come across it or where they can easily access it—Netflix and similar services. And if you search Netflix, for example, for “Mormon”, you can see why. The only title that comes up directly is American Mormon, and the 21 titles that come up (at the moment) when you click on the suggested “Titles Related to Mormons” include things like Sons of Perdition (about boys rejected by the FLDS Church), I Escaped a Cult and Email Order Bride. And more than half these 21 titles don’t actually seem to be about Mormons or Mormonism.

For me, the most important concern that Meet the Mormons raises isn’t exactly about the film itself. I don’t mind that a PR film exists—there is a place for films like those shown in the Legacy Theater. I want the Church to make and show such films; I want others to discover that Mormons are often interesting and have a generally positive perception.

But I also want other films about Mormons and Mormonism. I want films that meet the criteria and expectations of theater audiences (or at least a good sized portion thereof). I want good documentaries that not only show Mormons as good people, but also explain the details of Mormon doctrine and confront the difficult issues of Mormon history and beliefs. I’m sure many others want this also.

But you know what else I learned when my boss set me straight about Little Golden Books? You don’t get that kind of work — the non-PR pieces, the great films, the good documentaries that confront challenging issues — without films like Meet the Mormons first. Little Golden Books expanded the demand for childrens picture books. The series helped to make reading books to children part of the cultural norm. So too, Meet the Mormons may make it easier for other Mormon works to reach theaters and places like Netflix.

So, while I’m not sure that I would see a film like Meet the Mormons if it weren’t about Mormons, I do think that the film has an important role to play. We need more films that get this kind of attention.

Nor can I recomment Meet the Mormons for everyone. In particular those who are disaffected or annoyed with the Church should probably stay away—the PR nature of the film and its failure to get into difficult issues is likely to be frustrating and annoying. But for most others I recommend the film. You won’t necessarily learn anything new about Mormon doctrine and history, but I think you will enjoy meeting some interesting Mormons.

16 comments for “Expectations and Meet the Mormons”