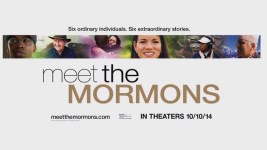 Imagine that the Meet the Mormons movie was made any time between, say, 1940 and 1990. I think we know almost exactly what it would have looked like:

Begin with a curb shot of a modest but immaculate home in Utah. The sun rises, barely. We go inside to see an attractive, white, middle class family of pioneer stock in their perfectly clean living room. There are seven perfectly-groomed children seated–without fidgeting–while the father reads scripture and the mother looks on adoringly, babe in her lap. We follow them throughout the day–Father in his corporate world where he declines a martini at lunch and then explains the Word of Wisdom to admiring co-workers. Cut to Mother in her pristine kitchen, preparing a flannel board for her Primary lesson, canning fruit, and waxing ecstatic about the joys her little ones bring her. Did I mention that she is blonde?

I won’t take you through their entire day because it would make your teeth hurt, but you get the idea. Now contrast that with Meet the Mormons.

Instead of presenting the cultural, traditional, and socio-economic ideal defined primarily by the fact that they are seeped in Mormon norms and practices, we have instead a norm of inclusion, variety, and service in the real world. A man the church won’t let be a deacon forty years ago is a bishop. A woman who, less than two decades ago, would have been criticized for being a poor role model and demeaning the nobility of womanhood (cite) is presented as a model Mormon. (And we won’t even get into what Brigham Young said about the children resulting from inter-racial relationships because it is too ugly.) But these are the stories that the church is choosing to tell about itself. Do they reflect the actual experience of your ward? Probably not. But the fact that they are being presented as aspirational is then all the better.

Are there things to criticize about the movie? Of course. Not featuring anyone who is single was not a wise move. Reports of a stake president telling his flock that seeing the movie on Sunday doesn’t constitute breaking the sabbath are troubling. Seeing high church leaders talk about Cinemark and opening night could be seen as incompatible with the dignity of their callings. Inviting famous and wealthy people to the premiere of the movie–instead of the poor and obscure–does not sound quite like how Jesus would have done it. Not releasing it overseas (at least, not now) does muddy the message of inclusion a bit.

But I’m not going to let the perfect be the enemy of the good and I’m not going to ignore progress because it lacks all of the gains that I would hope to see. If not a single non-member ever sees this movie, but if members imbibe the notion that real Mormons come in all colors, don’t conform to traditional gender roles, and live and serve in a wide and interesting world, I’ll take it.

26 comments for “Meeting the Mormons”