Let me share a friend’s story; it won’t be new to you. He was raised in the church, did all the things, went on a mission, blah blah blah, and in his 30s, heard for the first time that Joseph Smith translated the Book of Mormon by looking at a stone in a hat. He was completely thrown for a loop. Major faith crisis. Feels like the church lied to him. Feels like he lied to people on his mission. Wonders what else the church is “hiding” from him. Wonders if he can trust anything else he was taught in church.

If you introduce the hat in Primary, the kids don’t blink. There’s nothing about a stone in a hat that is any weirder than an angel with gold plates, right? If my friend had heard this as a kid, it would have been a total non-starter for a faith challenge. The problem isn’t the hat; the problem is (1) not learning about the hat until you are an adult and (2) being taught a narrative that doesn’t include the hat–a narrative which you later have to unlearn under duress.

I can’t even tell you how happy I am about the new lds.org essays which teach a narrative that will not require later unlearning. I know it will take a while to trickle down, up, and sideways, but we’re now on a path where the number of faith crises related to these historical issues should decline significantly.

So all is now well in Zion, right?

Historically, most of the pushback against Mormonism has come from evangelicals. So it is no surprise that the attacks concerned topics where Mormons differed from evangelicals and thus focused on LDS Church history. But the evangelical movement is waning as secularists advance. I suspect this means that future attacks against Mormonism will change, especially since the church’s new lds.org essays, the Joseph Smith Papers Project, etc., have largely defanged the common attacks levied against the church.

One thing our evangelical sisters and brothers never pressed us on was the reliability of the Bible and the New Testament in particular. But secularists will. (The attacks won’t necessarily be aimed uniquely at Mormons but at all Bible believers.) These attacks will poke at the NT to argue that it can’t possibly be used as a basis for faith in Jesus Christ, and thus there is no basis for that faith. Judging by the number of faithful believers (LDS and other Christians) who begin graduate studies in the Bible precisely because of their love for the Bible, only to lose their faith, these challenges have the ability to destroy the testimonies of some people.

But once again, the problem is not the hat, by which I mean that a serious engagement with the New Testament will not destroy one’s faith in Jesus Christ. The problem comes from not learning about the hat until you are an adult while having learned a narrative that didn’t include the hat. The hat-less narratives that students will later need to unlearn about the Bible often include these ideas:

1. The doctrine taught in the scriptures has always been the same throughout history.

2. Writers of scripture and other church leaders have always taught exactly the same doctrines.

3. The simple, surface meaning of the text is the correct one.

4. The text as you read it reflects precisely how it was originally written.

5. There is no historical, cultural, or literary background that you need in order to understand the text.

6. Every detail of the scriptures is literally, historically true and accurate.

7. The same word always means the same thing in the scriptures.

8. The author and date commonly attributed to the book in question are always accurate.

9. Nothing in the Bible reflects the cultural biases of the authors.

I could go on, but you get the point. The thing about these statements is that a close study of the Bible shows that not a single one can be affirmed in its entirety. This can be an enormous problem for conservative evangelicals but it need not be a problem for Mormons. After all, #1 and #2 are the natural results of continuing revelation, #4 restates the Eighth Article of Faith, etc. Mormonism is entirely capable of withstanding a close study of the Bible, something that can’t, I think, be said for some of the more conservative strands of evangelical thought.

So we should be sure that the way that we teach the scriptures does not include Hatless Narratives about the Bible that will later need to be unlearned; we need to teach about the hat from day one. Based on what I see from my kid’s seminary class, he’s not going to be blindsided by an evangelical who sneers at him about multiple conflicting accounts of the First Vision–they’ve covered that. But as far as I can tell, no church curriculum is in place to prepare him to be sneered at by an atheist who points out to him the irreconcilable details of the four gospels and uses them as a springboard to argue that nothing about the gospels can be trusted.

This is one of the reasons why I am concerned about the coming shift in BYU/CES curriculum to a more topical and less contextual approach to the scriptures. It seems like there is groundwork for the new “Restoration” class to engage the tricky historical issues of LDS Church history, but I’m worried about The Class Formerly Known as New Testament, which seems to focus primarily on the Plan of Salvation and not so much on the NT. I realize it’s early days and things could change; it also seems, judging from the letter that was released, that what happens at BYU may be quite different from what happens in CES. But I’m nervous that we are moving in precisely the opposite direction that we need to be in terms of preparing the next generation for what is most likely to challenge their faith, which is the findings of the academic study of the Bible which challenge some common assumptions. When the focus of the class is on Jesus’ role in the plan of salvation or the eternal nature of families, where the is warrant or the support–or even the time–to talk about how to understand the fact that some common but naive assumptions about the biblical texts will not withstand strict scrutiny? It seems more likely that the structure of the class could actually employ some of those assumptions if they end up cherry-picking texts to advance the main theme of the class or, at the very least, end up reinforcing the legitimacy of acontextual readings. Are we setting our kids up for precisely the same kind of faith challenges which plague this generation, but related to the Bible instead of LDS church history? 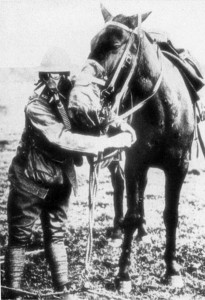 A horse prepared for a gas attack.

You hear stories about the planning stages of World War I, when some generals thought that the most important thing would be the cavalry. It is unfortunately the case that most people prepare to fight the last war instead of the coming one. It would be a shame if we were preparing the next generation to be really good at explaining why the translation of the Book of Mormon was no big scandal while leaving them entirely unprepared to respond to attacks on the reliability of the story of Jesus’ mortal life.

95 comments for “The Next Generation’s Faith Crisis”