was the annual Primary Program, one of my favorite Sundays of the year. Though many find this day difficult, I simply have to smile at the unpredictable entertainment, as well as the sincere belief and sincere silliness of little children. Moreover, there is the pleasure of watching someone else discipline my rowdy children while I sit and enjoy whatever message I can glean from the too-close-to-the-microphone yelling of three-year-olds. This year I did get a message. 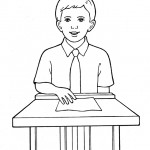 My youngest son was asked to speak for 2-3 minutes on gratitude. Someone must be inspired–because 18 months ago, my child actually listened during a family home evening lesson and heard Doctrine and Covenants 59:7, “Thou shalt thank the Lord thy God in all things.” (Usually he manages to slip off the couch, find little toys hidden strategically under the pillows and play, instead of listening.) In his Primary Program talk, he related how he decided to start saying gratitude prayers and explained that he learned a few things after months of never asking God for anything:

1. Though he did not want to offend, he thinks the rest of us sound “sort of selfish.” To him, it seems like we “rush through” our gratitude so we can get to our asking, and then we “slow down and say everything we want in detail.”

2. My son says he has learned that he “lacks nothing.” Heavenly Father did not suddenly give him everything he secretly desired as a reward for not asking for it. Sometimes he wants things–maybe a new toy or a friend at school to like him better, but he does not pray for it. Instead, he began to see that he already has Lego’s and a nice little sister to play with.

3. He says that he feels more grateful in his “real life.” Because he is always looking for things to be grateful for and pray about, he notices how other people help him, and he likes to tell them, “Thank you.”

He ended with the following story: “Many of you know that three years ago, I fell from our tree house and fractured my skull. I was unconscious and it was really bad and I had to get Life Flighted to Primary Children’s Hospital. After that, seeing Life Flight was kind of hard for my mom and for my family. We decided we should always say a prayer for people in an ambulance or on Life Flight. So, what happened is that about a week or two after I decided to start saying gratitude prayers, we were weeding in our garden when the Life Flight helicopter flew over. My mom called on me to say a prayer, because we always do that. I did not know what to do. I did not want to break my goal of gratitude; I had barely started. But I did not know what to say. I needed to pray for those people, so that Heavenly Father could help them.

“I just sat there for a second, worried. Then the thought came to me: what would I need if I were the dad and one of my kids were hurt? And then I knew: the Holy Ghost. That is what I would need. So I said a prayer thanking Heavenly Father for the Holy Ghost and how the Holy Ghost can comfort us and support us in hard times.”

My son finished his talk by challenging the congregation to try saying prayers filled only with gratitude, and, after I spent Sunday pondering the challenge, I decided to take him up on that. Why not? It is the perfect time of year to be grateful.

The day went so well. It was easy to be grateful. I had a friend randomly stop by to drop off a gift – a new book she says she was inspired to give me months ago. Today was suddenly the day that she could put it off no longer. Happy day. I love books. I love friends. I met with a few students on campus, and I think we fixed their papers – that will make grading easier. I love to write “A — great work!” It takes a few seconds as opposed to hours if the papers are not so well done. My older teenager was angry that I was a 15 minutes late to pick him up; I hate being being grumped at by an aggressive teenager – but he came home from his internship and apologized! Another thing to be grateful for! My prayers flowed easily and freely with gratitude, though I do have to watch myself because it is so natural to ask for things.

The phone call came at 11:32 AM. I was busy yesterday, did not check social media or the news, did not know that my 14-year-old cousin had run away from home again. While I slept warm in my bed, dozens of family members and volunteers hunted all night. Her father found her this morning, arms folded peacefully, looking more calm and graceful than she has been in months, even years. For all the world, it appears that she went to sleep outside in a place she liked to run to when she was upset; she hides there or elsewhere and reads her books. But last night, instead of scaring everyone and then coming home again, she stayed and went to sleep, freezing to death in the first bitterly cold night of the season. We do not know the full details yet, and we are all aware that she has been a troubled girl. Since she was a baby, we have so rarely been blessed with glimpses of the sweet and loving child she was in her heart; all too often she has been haunted and twisted and pulled in difficult and disturbing directions. No one who knew her will be completely surprised if her peaceful rest was self-chosen.

Just because I will not be shocked does not mean I am not infinitely distressed. That poor, poor little girl. What a sad and troubled existence she has lived, not necessarily because of reality, but because of the turbulence in her mind and body. Who can help but wonder if there is more that could have or should have been done?

I am sad for my children. Even though she is technically my cousin, she is their age, and we just call her “cousin,” because it is easier. My children are the ones who have grown up with her, not me – so I needed to be the one to tell them about the sad news. But stupid social media still catches me off guard, as does the swift gossip that winds between high school students. I should have driven straight to school to let them know, but I did not. What can I say? I was raised decades ago; my kids do not have cell phones; and their cousin attends a different high school. I did not realize my children would learn our cousin had died through mean-spirited gossip and cheerless jokes about drug overdose.

It has been a miserable day – and that is just me. Visiting my aunt and uncle is heartbreaking. They have been awake for days, first in frustration that my cousin had run away again, and then in increasing anxiety when she did not come home and could not be located, then in desperation as they physically called, texted, walked, ran, yelled, searched, cried. I have no idea how my uncle felt to find his third child frozen a few blocks from home, nor how he feels now. But I see and hear the heart-rending clues: his almost swollen-shut, reddened eyes; his scratchy, raw voice that thanks me graciously for coming; and the slow and vacant way he sits in his chair. That he stands and greets each new person – and there is a steady flow – with a smile and a hug is a testament to his innate decency and abiding testimony of an afterlife. My aunt is calm. Sorrowful, scattered, and weeping occasionally, but calm. She speaks of peace, of her daughter’s release from a troubled life, and of the relief she hopes her daughter finds. Those of us left here will be seeking peace and relief, as well.

At home, I am mentally listing what I still need to do (stretch, fold the rest of the laundry, write in my journal, . . .) when I place my foot on the first stair. It is 9:42 PM, and I am heading to bed. Prayers, I think. I need to say my prayers. Of course, I have been praying in my mind all day. But it is 9:42 PM when I remember that I am only saying prayers of gratitude.

This day is not miserable. It is impossible.

But I will bow my head.

I am grateful for

← When to Disobey
Recommended NT Resources, part 3: History and Commentary →

2 comments for “Day 2 of Gratitude”