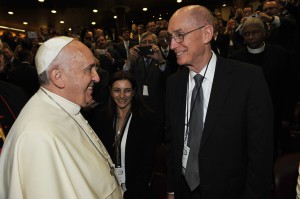 You can read the transcript here; two quick thoughts:

1. Here’s a comment on his marriage: “Her capacity to nurture others grew in me as we became one. My capacity to plan, direct, and lead in our family grew in her as we became united in marriage. I realize now that we grew together into one—slowly lifting and shaping each other, year by year. As we absorbed strength from each other, it did not diminish our personal gifts.”

This is a really intriguing direction for thinking about gender roles/characteristics in marriage. What I hear him saying is that men and women come to marriage with a different set of roles/characteristics, but one goal of marriage is for them to teach each other and to adopt each other’s roles. I sometimes hear in LDS venues a rather opposite idea–one I find theologically problematic inasmuch as it suggests that men and women should maintain separate characteristics, something I find incompatible with both the idea of the perfection of Christ and his ability to serve as an example for all both men and women, as well as the idea of men and women striving to themselves become perfected. His thinking here can be a great bridge from older teachings about gender difference to a newer vision where those differences can still be acknowledged but won’t be seen as limiting. I especially like his idea that, as he took on nurturing and his wife took on leading, it didn’t diminish either of them. (Contra language we sometimes hear bemoaning the loss of femininity and masculinity.) So, in short, yay!

2. Later on, his says this: “Today more than a million members of our Church in the United States gather their families every day for prayer. Forty-one thousand (41,000) individual families in Mexico read scriptures together one to three times a week. Seventy thousand (70,000) individual families in Brazil gather two or three times a month for an evening of prayer, worship, and scripture reading.” He uses these as examples of “small numbers” with the capacity to make a big difference.[1]

What I found interesting about this is that most of what I have heard regarding numbers since I joined the church in 1992 has been triumphalist rhetoric (“Now 12 [then 13, then 14, then 15] Million Strong and Growing Exponentially Until We Take Over the Earth!”). So this language from President Eyring, lauding the power of small numbers, is quite the departure. It might serve to build community and unity for the Saints in the face of slower growth rates, defections, and a general cynicism toward statistics in the face of high inactivity rates. I think we are better people when we see ourselves as a scrappy minority than as a swaggering growth machine, so I deem this rhetoric a good thing for our sense of self.

← Family Home Evening: Repentance
The Teachings and Doctrine of the Book of Mormon, Take Four →