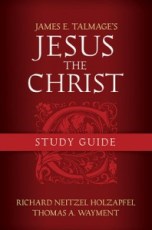 I don’t think it is an exaggeration to say that James Talmage’s Jesus the Christ (hereafter JTC) enjoys quasi-canonical status in the church. This fact makes many of my biblical studies friends cringe, because Elder Talmage’s work reflects one-hundred-year-old scholarship–with all of its limitations and biases.

Richard Holzapfel and Thomas Wayment have written a study guide that attempts to bring modern scholarship, revelation, and sensibilities to the reader of JTC. After a brief introduction which explains their purpose, they devote one short chapter to each chapter of JTC. These chapters discuss advances in biblical scholarship, new LDS revelations, and also devote quite a bit of time to the Joseph Smith Translation and other teachings from Joseph Smith which were not available to Elder Talmage. They conclude each chapter with a few study questions. (I found the study questions pretty anodyne, although a few were thought-provoking.) While carefully honoring Elder Talmage at every turn, Holzapfel and Wayment are clearly more comfortable with ambiguity and less-than-perfect disciples than Talmage was.

There is no doubt that a reader of JTC would benefit immensely from this study guide. For example, Elder Talmage wrote that “the exact site of [Capernaum] is at present unknown . . . we shall probably never be able to know the exact fact.” But as Holzapfel and Wayment point out, “additional evidence has been unearthed, and the site is no longer in dispute.” This may seem a minor issue, but it is a good illustration of a fact that many people find hard to believe (or perhaps never considered): there really are new advances in the study of a two-thousand-year-old text. There are more significant updates as well: Elder Talmage assumed a hemispheric model for the Book of Mormon; Holzapfel and Wayment correctly indicate that most LDS no longer believe that. (Although it was unfortunate that Holzapfel and Wayment covered this issue in chapter 39 and not in chapter 5, where JTC first mentioned the hemispheric model.)

If the reader expects everything in JTC which is problematic to be addressed in the study guide, she will be disappointed. For example, Elder Talmage makes reference to Job 19:25 as an example of a prophecy of Jesus, but this is an extremely unlikely reading of that text; Holzapfel and Wayment don’t address it. At another point, JTC argues that Matthew, Mark, and Luke had no knowledge of each other’s texts; no modern scholar believes this; again, the study guide does not address it. In another instance, JTC argues that Peter was not “unlettered” and was “well-to-do;” I don’t think most scholars would agree with that characterization (in fact, Mark seems to suggest precisely the opposite). While the study guide covers many of the issues in JTC to which a modern scholar would object, the reader should not therefore assume that everything problematic in JTC has been addressed.

Further, while the study guide does a good job in correcting now-dated observations, it does not provide to the reader any of the new insights of biblical scholarship. I realize that there are space limitations, but I’d hate for someone to read JTC and the study guide and feel that she now had had an introduction to modern scholarship. This would be akin to someone reading a geocentric textbook and then a pamphlet correcting it–but who hadn’t had a heliocentric model explained to him. Sure, he won’t believe the geocentric model anymore, but he has no idea of the new knowledge that is out there, its uses or its implications. Something as simple as suggested sources for further study at the end of the book or a few pages explaining the major trendlines of 20th- and early-21st- century New Testament scholarship would have been enormously helpful here.

I also noticed some editing infelicities in this book. At one point, they date the Talmud to the 4th and 5th centuries (xvi), but at another point date it to the 6th or 7th centuries (p30). Material about Peter as the rock (p103) appears in the chapter on the Transfiguration when it properly belongs in the previous chapter. At least one of the study questions seemed attached to the wrong chapter. And I believe the authors introduced a few errors of their own. And while biblical scholars are notorious for disagreeing, there are a few of what I would consider errors here. For example, at one point they write that Matthew was the only Gospel writer to gather parables together (p87), but Mark did the same. Later, they claim that no ancient manuscript has “rope” instead of “camel” (p124) in Jesus’ statement about a camel going through the eye of a needle, but this is not the case (see Metzger, A Textual Commentary on the Greek New Testament, p40).

I also wonder about the reader’s experience of working through JTC and the study guide. While Holzapfel and Wayment are extremely deferential to Elder Talmage and exceptionally subtle in their corrections of his work, it is nonetheless the case that virtually every page of the study guide remedies a flaw in JTC. So imagine a 19-year-old missionary reading JTC and then the study guide. She reads JTC and the study guide says, in effect if certainly not in tone, “Elder Talmage was wrong. An apostle was wrong. Wrong again. Wrong over here. Wrong about this as well.” And while the approach of the authors is to frame Elder Talmage’s work as not wrong but simply limited by his historical circumstances, there are many instances in the book–such as changing interpretations of Eve’s role in the Fall–where real doctrinal shifts in LDS thought in the last century become obvious.  I suppose your sensibilities regarding the proper level of obedience to authority and attitudes toward (de facto) infallibility will determine whether you think this reading experience is a good one or a poor one for our missionary to have.

Which leads to the big question: does this book make sense? Or would it make more sense for JTC to quietly fade away? JTC is about 500 pages long–that’s a big commitment. The study guide adds another 200 (although there is lots of white space). And for all that, virtually nothing from modern New Testament scholarship is covered (unless JTC happened to mention a topic that the study guide corrects). Are there 700 better pages to read on the New Testament? I think the answer to that question is certainly a yes. (Start with Jesus Christ and the World of the New Testament.)

And despite Holzapfel and Wayment’s gentle correction, I would still be uncomfortable recommending that someone read JTC. Elder Talmage wrote before the Holocaust made the full price of anti-semitic biblical interpretation clear; his references to “wicked Jews” are, by modern standards, troubling. Also uncomfortable are his racially-tinged remarks about Native Americans. The study guide addresses attitudes toward the Jews, but I wonder if it is enough to counter-act what Elder Talmage writes and to justify exposing a new generation to these ideas. Also, JTC has the tendency common to its day of embroidering upon the biblical record by fleshing out details and suggesting motives and attitudes for various characters (“Mary’s sensitive nature was pained” — no gospel account says anything about the nature or emotional state of the woman who anointed Jesus), which, I think, makes it hard for the reader to avoid importing these extremely speculative details to further readings. These reasons might weigh in favor of allowing JTC to quietly retire.

Of course, my question here presumes that you can wave your magic wand and retire JTC. If you can’t, the study guide’s mission is amply justified. I also confess that I found something lovely about the idea of the study guide: instead of Holzapfel and Wayment arguing that JTC is past its sell-by date and the only thing left for it is the recycling bin, they instead chose to, in a sense, redeem the text by bringing it up to date. I imagine that if Elder Talmage were still alive, he would have done precisely the same thing in the wake of new discoveries, beliefs, and revelations. It is a lovely tribute to him and I love how they model respect for his apostolic office with a willingness to correct his work.

So: there are better books to read about Jesus than JTC. But if you are going to read JTC, you should read it with this study guide in hand.

The publisher provided me with a review copy of this book.

← All things testify of Joseph Smith: on the ethics and theology of faith-promoting legends
My Testimony of the Prophet Joseph Smith →