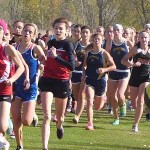 Pray for the Cougars. Or the Tigers. Take your pick. Either one is fine as far as I’m concerned. Or if you’re not into college football, pray for something else. That’s the approach I’ll take, since I barely notice the existence of football.

But I’m convinced you should pray for something, whatever it is.

In high school, I was a fairly decent distance runner. I started running track and cross country as a freshman, and some time that year I decided to start putting in the work to get good at it. There were a couple more people on the team who felt like I did, which was good. There were also a few more who both worked hard and were incredibly fast, which was even better. I won a few frosh/soph races as a sophomore, but after that I was more of a backup singer than a prima donna.

When cross country season started each fall, I was in shape and ready to run, although my best races usually came in the middle of the season rather than at the end, when I wanted them the most. I used to think that I had never run up to my potential, but looking back on it now, I think I did run as fast as hard work, modest talent, and the prevailing training regimen of the 1980s was going to take me.

I cared about running quite a bit, and I thought a lot about upcoming races. I prayed intensely about them, as much or more for my teammates’ sake as for my own. There were some good days when we won, but there were more days when things didn’t work out. My top ten list of worst days of my life still includes a couple marked by the bitter disappointment of defeat despite all I could do. Sometimes the other team outraced us. Sometimes teammates outraced me.

As I approached my senior year, the one thing my teammates and I wanted was to finally win a league championship. We trained hard all summer, as the competition in our 4A league in Southern California was fierce. In the days leading up to the dual meet with our main rivals, I worked out the math: we could win, but it would take a perfect race. I visualized myself running the whole course. I prayed.

I ended up running a perfect race (16:31 for three miles with each mile split right at 5:30 isn’t too shabby, if I say so myself), but my team still lost by two points (see “worst days of my life” above). Although my team was composed of great runners of fine character who were literally academic all-stars on top of it, the championship we had worked so hard for went to a team of cads, ruffians, dullards—

—and one Mormon. I had met him a year earlier when the youth of my ward drove down to a dance in his stake. We talked occasionally, and we ended up as freshmen at BYU at the same time. I’m sure he trained hard (but I was still faster than he was, darn it). I’m sure he prayed for his team as intensely as I prayed for mine (and they were just slightly faster than us on the day that it counted).

Two LDS young men, both training for the big race and praying for their own teams, can’t both be happy at the end of the day. I can’t say that God was on one side or the other, although I’d like to think that he was pleased by both our efforts, even in an endeavor as limited as high school sports. Would it have been better if neither of us had been praying for our teams? I don’t think so. I would submit that not praying about something is, for Mormons, synonymous with not caring about it. The logic of “Give us this day our daily bread,” “Cry over the flocks of your fields,” and “be anxiously engaged in a good cause” suggests that caring about the things we’re involved in, and praying about the things we care about, is our proper state, rather than disinterest or equanimity in the face of anything that happens.

So pray for someone.

← Book Review: The Council of Fifty: A Documentary History
Wickedly Awesome Traditions of My Fathers and Mothers →

18 comments for “Pray for the Cougars”