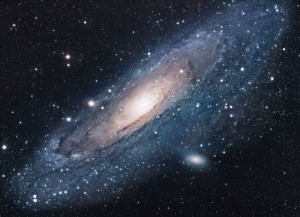 A piece of creation: the Andromeda Galaxy

Continuing with my project to actually read the LDS books I buy, I’m now reading The New Mormon Challenge (Zondervan, 2002), a serious book about Mormonism by a bunch of Evangelical scholars, edited by Francis J. Beckwith, Carl Mosser, and Paul Owen. Apart from our mere existence, two things about us really trouble Evangelicals: our relentless growth (which has apparently leveled off since the book was published) and our huge corps of missionaries (which has ballooned since the book was published). We are a threat. That perhaps explains why Evangelicals feel justified in disparaging Mormons from their pulpits, classrooms, and publishing houses. But this book is by academics, not pastors, and is a serious discussion, not a slam. So I was a little disappointed with Chapter 3, the first meaty chapter, which defends ex nihilo creation and critiques the LDS belief in creation out of preexisting but unformed matter.

Chapter 3, “Craftsman or Creator? An Examination of the Mormon Doctrine of Creation and a Defense of Creatio ex nihilo,” is authored by Paul Copan and William Lane Craig. They insist that ex nihilo creation “has been proclaimed by Christians in all centuries and has almost always been understood to mean that God created all things out of nothing (ex nihilo). That is, God did not work with uncreated, preexisting materials but created literally everything by divine fiat” (p. 96). They review Old and New Testament passages, plus various Christian commentators, then conclude: “We have tried to show that the LDS belief that God created the whole world out of eternally preexisting, unorganized material or chaos does not square with the biblical text and that the literature cited by LDS scholars consistently fails to grapple with it. To the contrary, in the Bible we find the doctrine of creation ex nihilo clearly set forth” (p. 126). Throughout the chapter, the impression is given that the view of the authors is the broadly accepted reading of Genesis 1 and the widely accepted Christian view of the doctrine of creation, with the Mormons quite out of step. They go so far as to flip the common LDS charge that the ex nihilo doctrine came into Christianity from Hellenistic philosophy with the claim that “it is the LDS conception of creation that is obviously in line with Greek thought — a variation of neo-Platonic thinking, to be exact,” with supporting references to Plato’s Timaeus.

So I decided to test that claim against a variety of commentaries and reference books in my library. Surprise! They largely endorse the “created out of preexisting matter” reading of Genesis 1 and attribute the Christian view of ex nihilo creation to later post-biblical doctrinal developments. If you want to believe ex nihilo creation, that’s fine, but don’t tell me Mormons are out of line with all other Christians or that the Mormon view misinterprets Genesis. Here are some quotations from my sources.

From Alister McGrath’s Christian Theology: An Introduction (Blackwell, 3rd ed., 2001), pages 297-98, it is clear that creation ex nihilo was not the original Christian view:


The general Greek understanding of the origins of the world could be summarized as follows. God is not to be thought of as having created the world. Rather, God is to be thought of as an architect, who ordered preexistent matter. … This idea was taken up by most Gnostic writers, who were here followed by individual Christian theologians such as Theophilus of Antioch and Justin Martyr. They professed a belief in preexistent matter, which was shaped into the world in the act of creation. In other words, creation was not ex nihilo …. However, the conflict with Gnosticism forced reconsideration of the issue. In part, the idea of creation from preexistent matter was discredited by its Gnostic association; in part, it was called into question by an increasingly sophisticated reading of the Old Testament creation narratives. Reacting against this Platonic worldview, several major Christian writers of the second and third centuries argued that everything had to be created by God.

From the entry “Creation” by J. R. Porter, in the Oxford Guide to the Bible (OUP, 1993), edited by Bruce M. Metzger and Michael D. Coogan:


The biblical accounts of the creation of the world have their background in ancient Near Eastern mythology, in which creation is often depicted as the deity’s victory over the forces of chaos, represented by threatening waters, as a result of which the god is established as a supreme king. A large number of references show that this concept was well-known in Israel also. … Although the watery chaos is still there [in Genesis 1], there is no conflict between it and God, as in the ancient myth. God creates in unfettered freedom by his word or command, and creation is brought about by the separation of the elements of the universe, which produces an ordered and habitable world. Hence creation is not so much dealing with absolute beginning, creation from nothing — though this idea appears later, as in 2 Maccabees 7:28 — as with the world order as perceived by human beings.

From How to Read the Jewish Bible by Marc Zvi Brettler (OUP, 2007), page 41, contrasting order and chaos in the Genesis 1 account of creation:


The opposite of structure is chaos, and it is thus appropriate that 1:1-2 describe primeval chaos — a world that is “unformed and void,” containing darkness and a mysterious wind. This story does not describe creation out of nothing (Latin: creatio ex nihilo). Primeval stuff already exists in verses 1-2, and the text shows no concern for how it originated. Rather, it is a myth about how God alone structured primordial matter into a highly organized world. Only upon its completion is this structure “very good.”

Walter Brueggemann, in An Introduction to the Old Testament: The Canon and Christian Imagination (Westminster John Knox Press, 2003), quotes the first two verses of Genesis from the NRSV (“In the beginning when God created the heavens and the earth, the earth was a formless void and darkness covered the face of the deep”) and offers this commentary at page 34:


It is widely agreed that Genesis 1:1-2 constitutes a remarkable premise for creation, namely, that disordered chaos (expressed in Hebrew onomatopoetically as tohu wabohu) was already “there” as God began to create. That is, God did not create “from nothing,” but God’s act of creation consists in the imposition of a particular order upon that mass of undifferentiated chaos. For much of the Bible, the energy of chaos (antiform) continues to operate destructively against the will of the Creator, and sometimes breaks out destructively beyond the bounds set by the decree of the Creator. It is an interesting example of “imaginative remembering” that much later, in 2 Maccabees 7:28, the tradition finally asserts “creation out of nothing,” a view that since then has predominated in later church traditions of theological interpretation.

Finally, here is what John H. Walton says at page 42 of The Lost World of Genesis One: Ancient Cosmology and the Origins Debate (IVP Academic, 2009), reading Genesis 1 as an account of functional rather than material creation:


It has long been observed that in the contexts of bara no materials for the creative act are ever mentioned, and an investigation of all the passages mentioned above [which use the Hebrew word bara] substantiate this claim. How interesting it is that these scholars then draw the conclusion that bara implies creation out of nothing (ex nihilo). One can see with a moment of thought that such a conclusion assumes that “create” is a material activity. To expand their reasoning for clarity’s sake here: Since “create” is a material activity (assumed on their part), and since the contexts never mention the materials used (as demonstrated by the evidence), then the material object must have been brought into existence without using other materials (i.e., out of nothing). But one can see that the whole line of reasoning only works if one can assume that bara is a material activity. In contrast, if, as the analysis of objects presented above suggests, bara is a functional activity, it would be ludicrous to expect that materials are being used in the activity. In other words, the absence of reference to materials, rather than suggesting material creation out of nothing, is better explained by indication that bara is not a material activity but a functional one.

Walton goes on to make an important distinction:”An important caveat must be noted at this point. If we conclude that Genesis 1 is not an account of material origins, we are not thereby suggesting that God is not responsible for material origins. I fully believe that God is fully responsible for material origins, and that, in fact, material origins do involve at some point creation out of nothing. But that theological question is not the one we are asking. We are asking a textual question: What sort of origins account do we find in Genesis 1?” Yes, it is best to avoid confusing theological reasoning with textual interpretation.

No doubt some readers have other other sources they can pull off their own shelves to consult. My point is that, in fact, creation from preexisting matter is widely endorsed by biblical scholars as the proper textual reading of Genesis 1. Furthermore, creation ex nihilo is not widely viewed as how the Hebrew Bible was originally read or understood. That was a later Christian innovation that did not appear until well into the second century at the earliest. So the idea that the LDS view is based on a textual misreading of Genesis 1 and is out of step with the broad Christian view is simply misleading. Worse, in this case it appears to be intentionally misleading: the authors are certainly aware of the wider scholarly views of the issue (which I sampled above) but gave no indication in the chapter that their Evangelical view of the text and doctrine are not shared by the larger community of Christian scholars.

So: -1 for William Lane Craig and for the credibility of The New Mormon Challenge. Let’s see if later chapters can do any better.

Note: After writing up this post, I looked up Blake Ostler’s review (actually, three reviews) of the same chapter. He does compliment the book for serious engagement with LDS beliefs (“The authors are pioneers in the sense that they take seriously modern Mormons and how we portray our own beliefs”) but rejects, in considerably more detail than my brief review, the arguments of the authors in favor of ex nihilo creation. Here is a paragraph summarizing Blake’s critique, which I agree with on all points:


I argue that each of their arguments is a seriously flawed. I begin by showing that Copan and Craig (hereafter “C&C”) have misread the Mormon scriptures and failed to even consider the strongest scriptures against their view. I argue that there are compelling reasons to support the view of the majority of biblical scholars that the Bible teaches creation out of a pre-existing chaos. I next argue that C&C have seriously misrepresented the biblical data to read into it their doctrine of absolutist creation. I add that their argument that the doctrine of creation ex nihilo was not a philosophical development is uninformed and fails to grasp the essential distinctions necessary to make sense of the doctrine as it developed in Patristic theology. I show why the vast majority of scholars agree that the doctrine of creatio ex nihilo was first formulated around 200 A.D. in arguments with the gnostics, Stoics and the Middle Platonists.

← My Testimony of the Prophet Joseph Smith
Hypersensitivity and Trolls: A Codependent Dysfunction →