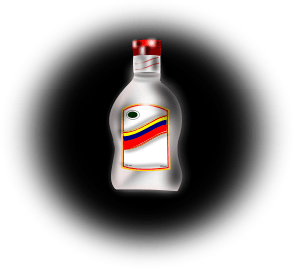 Our naughtiest holiday tradition was snapdragons. On Christmas night, we would gather to my grandparents’ house for a buffet of tremendous proportions. Sooner or later grandma would appear with that special china platter, grandpa would show up with a package of dried up raisins, matches, and, mysteriously, some 90 proof brandy tidily transferred into an old Lubriderm bottle. (And let me go on record saying that I actually have no idea what I’m talking about when it comes to brandy. This is all from memory.)

The process is quite simple: throw some raisins on the plate, douse with brandy, strike a match, light the brandy, and “snap” the fiery “dragons” in the darkened room.

In retrospect, I find it interesting that I have no idea who had to go down to the local liquor store and buy the brandy. But, considering the population of the town I grew up in, I am certain many small-town friends and ward members knew that there was alcohol hiding in my grandparents’ home. 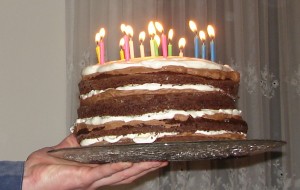 They might have also known about our unfortunately-named (and forever un-re-namable) “Jesus Cake” (an amazing chocolate cake layered with chocolate frosting, real whipped cream and bananas—served after the Nativity program on Christmas Eve), as well as our non-holiday family tradition of swearing.

I should clarify. Swearing is only allowed if you are quoting: re-telling a witty joke with a profanity-laden punchline is considered good humor in my family. Thank you very much, J. Golden Kimball. And if our cows in the pasture heard a few cuss words before they heard the joke, well, such was farm life; any good Christian ranch girl or boy believes God created cows. Thus, He clearly understands why a swear word might slip out when herding His bovine creatures.

I am not even going to try to justify our “tradition” of staying in our swimming suits long after we were done swimming, though the lack of central air conditioning might have had something to do with it – and yes, plenty of people knew about that one, too. Regrettably, one of the people who remembers is a former missionary, now BYU bishopric counselor. Of my daughter’s freshman ward. Sorry about that.

Of course, what could my 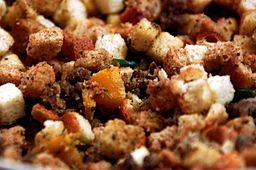 small-town friends say to us? We knew about their wicked traditions, as well: Personally, I love the idea of singing sacrament songs while breaking up the bread for the Thanksgiving stuffing, so I have wanted to join Sister — in her Thanksgiving preparations for years. And I have also heard about a very naughty New Year’s Eve “Run” that includes very little clothing, freezing temperatures, and planting an orange stake as far as possible out in a snow-covered pasture. Shameless! My in-laws play “Peanuts” on all family holidays until 2 or 3 a.m.–with face cards. Scandalous! And I do happen to know the person who buys thousands of dollars of fireworks in another state and then holds the ”Cul-de-sac of Fire,” rivaling Provo’s “Stadium of Fire.” (I think the police know that person, too, since they come visit nearly every year.)

Alas, sooner or later, someone in a good LDS family is bound to start feeling guilty about wickedly awesome traditions. That person will doubtless put on clothes immediately after swimming, silently break Thanksgiving bread (not even thinking of sacrament hymns), and certainly refrain from laughter when others run nude in sub-zero temperatures. Such a person will try to re-name Jesus cake as Christmas cake, suggest that quoting swear words is technically saying them, and insist that eating brandy-soaked snapdragons is not avoiding the appearance of evil. “Of course,” I tell the person. “Of course, you are right.” And then I will confide in a whisper that I never ate the snapdragons anyway, not even as a little girl. I hid them in my napkin and threw them away.

But I will not tell that righteous person the whole truth: I only did that because I dislike raisins, disgustingly chewy, half-dried grapes. Soaking in burned brandy can’t possibly redeem them. Or me, apparently. Because even though no one in my immediate family kept snapping up fiery dragons after the deaths of my grandparents, I still want to know which cousin made off with the snapdragon platter. It might be nice to serve the Christmas cake on it.

← Pray for the Cougars
Who killed Goliath? CSI in Jerusalem →

6 comments for “Wickedly Awesome Traditions of My Fathers and Mothers”