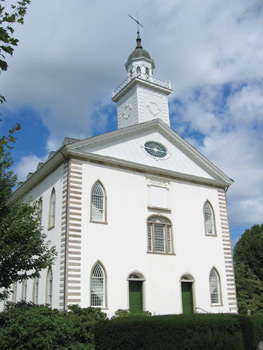 One of Joseph Smith’s earliest impulses was to build temples. Just 5 months after the Church’s organization, September 1830, Smith sent a delegation to the west to the Lamanites, but also, according to the delegation’s leader Oliver Cowdery, “to rear up a pillar as a witness where the Temple of God shall be built, in the glorious New-Jerusalem.” This was an unusual quest in a world of cathedrals, basilicas, chapels, and synagogues. “During the course of his life,” wrote Richard Bushman, “[Joseph Smith] never built a standard meetinghouse, even in Nauvoo, where the Mormon population exceeded 10,000.” Smith’s singular temple impulse was remarkable, but defining what temple worship should be in a modern world was a mystifying challenge. Smith saw his role as a restorer of truths once lost. But where could he turn for inspiration? To heaven for sure, but what would he restore since, according to Christian tradition, the purpose of the ancient temple had been fulfilled with the coming of Christ?

In 2000 I toured the Boston Temple with some of my neighbors prior to its dedication. One neighbor was an architect. After the tour he said “I was impressed with the design of the temple. It wasn’t at all what I expected. I thought we would see a large basilica or sanctuary with ornate design. But instead we saw many smaller worship spaces connected by hallways, staircases, and corridors. The worship spaces were truly beautiful but their design was quite different from what I’ve seen in other churches.”

Significantly, Smith defined temple worship as progressive worship, advancing through different ritual spaces – personal intimate rites, then group ritual, and unified congregational worship. The architectural design of the Kirtland Temple visibly emphasized this progressive worship form with its various ritual spaces: a main hall for congregational solemn assemblies, which was subdivided by curtains into smaller group worship spaces for temple instruction and prayer. The pulpit areas at opposing ends of the main hall were set apart by “veils” as private areas for personal intimate worship. In my book Schooling the Prophet

I quote from Wilford Woodruff’s account of a Kirtland Temple endowment service that progresses from intimate prayers within one of the pulpit veils, to group rites and instruction in a partition formed with curtains rolled down, and finally to congregational ritual prayer with curtains rolled up. The entire experience lasted from early morning until four in the afternoon.

Read carefully the account of Christ’s ministration at the Bountiful Temple in the Book of Mormon, especially 3 Nephi 19 – what Andrew Ehat calls “the Nephite endowment.” It is a liturgical centerpiece of Nephite temple worship: the congregation partitioned into smaller worship groups for temple instruction and prayer; Christ’s twelve Nephite disciples officiating in worship rites, each assigned to a smaller worship group; the twelve ministering ritual language, repeating word for word “those same words which Jesus had spoken [to the twelve in the temple the day before]—nothing varying from the words which Jesus had spoken” (3 Nephi 19:8); the twelve forming a solemn prayer group in unified prayer, culminating in a final miraculous manifestation—the transfiguration of the prayer group participants as they were enveloped in the presence of Christ. The entire ritual experience provided a sacramental archetype for “endowment” in the early Restoration, a word Smith referred to frequently in aspiring for spiritual outpourings reminiscent of the Day of Pentecost account in the New Testament (Luke 24:49; Acts 2).

Elsewhere, Book of Mormon narratives reframed the fall of Adam as a fortunate fall (see Lehi’s blessing on Jacob, 2 Nephi 2:14-27), as an ascension narrative to return man to God – contradicting prevailing Protestant interpretations of Adam and sin. Hundreds of years later Lehi’s Eden interpretations are entrenched in the temple culture of the narratives of Ammonihah (Alma 12) with a heritage of priests after the order of Melchizedek “which were made pure, and entered into the rest of the Lord their God” (Alma 13:12). Doctrinally these ideas provided a foundational seedbed for temple theology, with steps along the way: The Enoch revelation of 1830 and the emergence of Smith’s theology on the theosis of man – as Terryl Givens noted: “Enoch’s rather surprising assertion that he makes to God, ‘thou hast made me, and given me a right to thy throne.’” Then the controversial Vision revelation of 1832 (D&C 76) which proclaimed that the faithful “are they who are Priests & Kings who having received of his fullness & of his Glory are Priests of the most high after the order of Melchisidec which was after the order of Enoch which was after the order of the only begotten Son wherefore as it is written they are Gods even the Sons of God wherefore all things are theirs.” Later these themes matured with the introduction of complete Nauvoo temple theology in 1842, but they were present in the earliest days of the Restoration and find their origins in the narratives of the Book of Mormon.

For much of his life Joseph was determined to conquer death, after losing his brother Alvin in 1823, then losing six of his eleven children after his mother had lost seven of her eleven children. The Book of Mormon’s Amulek declared a universal resurrection and Smith’s Vision revelation of 1832 opened the door for salvation to all but the sons of perdition. But Smith’s salvific development was not complete, for what mattered still in his quest was to deny the power of death to destroy the filial bonds of mortality—to preserve forever the familial relationships of those we love in the eternities to come. Mormon’s editorial hand preserved a very lengthy passage that he must have deemed exceptionally important (longer than the entire book of Moroni and longer than Mormon’s personal writings in his own internal text, the Book of Mormon). It recorded Mosiah2’s coronation by his father King Benjamin at the Zarahemla temple. The entire passage contains profound spiritual insights that culminate in Mosiah 5–6 when the aging King Benjamin establishes a salvific covenant community among his people—with a sealing blessing. His communal covenantal ceremony included a ritual purification (Mosiah 4:2), a new name taken collectively as a people (5:7), an oath made in the presence of ordained priests and the prophet-king himself (6:3), and a formal recording of the names of those received into the covenant community (6:1).

During the coronation ceremony the aging king invokes ancient enthronement rituals, covenants, symbols and sealing, but then applies them not just to the new king, but to all members of his covenant community. Matthew Bowen said: “it is the application of royal coronation/enthronement texts to the people themselves—making them all potentially kings and queens, sons and daughters at the right hand—that makes Benjamin’s speech so revolutionary . . . one expects that the new king Mosiah will take upon him a new name – a throne name (such as Benjamin, or Nephi, used historically in Nephite coronations, see Jacob 1:9-11). But Benjamin extends this symbolic rite to all his people: ‘The name of Christ, rather than Benjamin’s own name, is given to all his people as a new name— a ‘throne’ name.”

We see similar impulses emerging early in the restoration. In December 1830 Smith recorded the prophecy of Enoch describing in detail the filial bonds of communal covenant relationships in Enoch’s ancient city of Zion (Moses 7:63), representative of the filial relationships of heaven itself and echoing the Benjamin narratives of a covenant community brought to heaven with everlasting salvation and eternal life. In 1834 the Prophet’s father, Joseph Smith Sr., was ordained a patriarch to the church, a new office instituted to provide personal blessings of comfort, wisdom, and promises of personal destiny—but also to spiritually and ritually seal and adopt the believer into the communal family of God, which meant adoption into the house of Israel with promises of eternal blessings flowing from the ancient biblical covenant of Abraham, Isaac, and Jacob. On this doctrinal path, said Samuel Morris Brown, “Smith sacramentalized adoption, first with patriarchal blessings and baptism for the dead, complementary impulses of connection and salvation, then with family sealings within the Nauvoo Temple.”

A common assumption among scholars and modern lay persons is that Mormon temple theology appeared by revelation in Nauvoo in 1842. However, as these examples show, facets of temple worship developed much earlier – many appearing in 1830, and showing signs of seminal influence from the Book of Mormon translation project of 1828-29. As Don Bradley said of his research on the lost Book of Lehi: “When we look and see some of the clues to what was in [the book of Lehi], it is already anticipating things that some people, including previously myself, considered to be a later development in Nauvoo-era Mormonism and thus not present in the Book of Mormon. And yet what we see from the clues is that “Nauvoo Mormonism,” “temple Mormonism,” is original and literal [early] Mormonism—it’s the very faith propounded by Mormon in his book, beginning with its lost opening, the Book of Lehi.”

Notes From All Over

“A messenger sent from the presence of God” https://www.timesandseasons.org/index.php/2021/01/a-messenger-sent-from-the-presence-of-god/

“Or, are they all wrong together?” https://www.timesandseasons.org/index.php/2021/01/or-are-they-all-wrong-together/

“By mine own voice or by the voice of my servants” https://timesandseasons.org/index.php/2020/12/by-mine-own-voice-or-by-the-voice-of-my-servants/